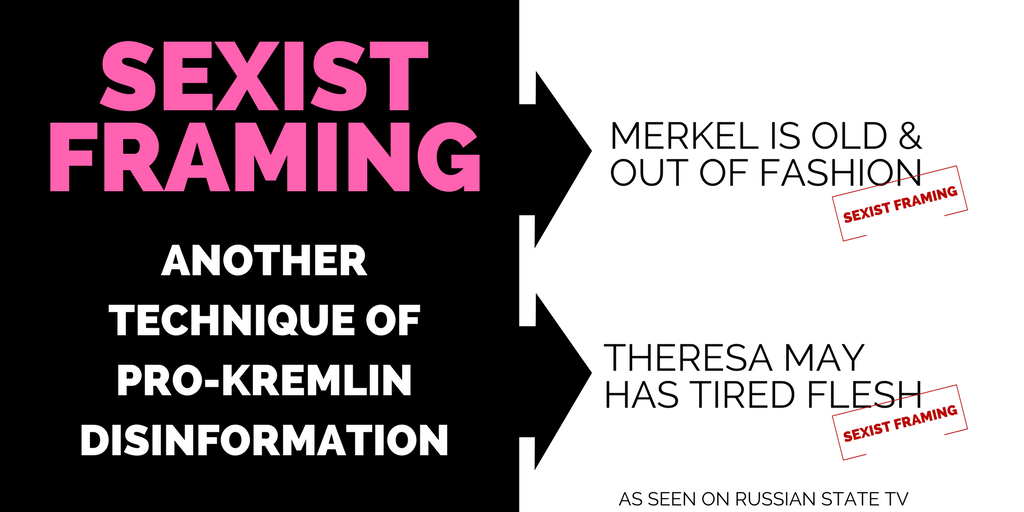 While there has been growing public attention in Russia towards sexual harassment allegations in recent days, in the past the topic has tended to be repeatedly downplayed and ridiculed on state-controlled TV. One comparison even drew a link between the US sexual harassment scandals and Soviet repression.

Women are a constant target for pro-Kremlin disinformation campaign, and here are a few examples from the past:

Sexist framing is just one of the techniques used when the pro-Kremlin campaign targets women – and especially women in power. “Don’t get me wrong; I am not going to talk about Angela Merkel as a woman”, top Russian TV presenter Dmitry Kiselyov carefully started his story under the headline “Merkel falls out of fashion” broadcast over a year ago.

“I am not going to discuss her wrinkles, her hairdo, the colour of her clothes or the unchanging design of her trouser suit”. “I personally have the feeling that Merkel has grown much older”, Mr Kiselev explained, as the word “Démodée” appeared in French on the screen behind him. 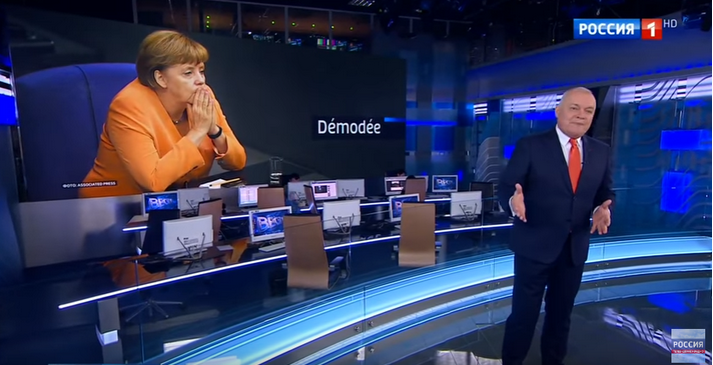 See further examples of disinformation about the German Chancellor here.

UK’s prime minister Theresa May was framed in the same vein in November last year, right after she had said that Russia seeks to “weaponise information”. The programme’s opening news report about the British Prime Minister came with the headline “News of foreign sex”, with the host reporting that Theresa May would soon join the ranks of Femen activists. Then, both Viking warriors who stripped before battle and naked Femen activists were recalled, before the anchor moved on to saying that May displayed a “generous dose of whiteness of her tired flesh” while delivering her “most aggressive” speech against Russia.

Ceaseless recycling is one of the most effective ways how disinformation is strengthened and spread to new audiences on social media and various online platforms.

For example a shocking photo of a Danish girl has been used since 2014 in many different stories in various countries claiming different cases of assaults committed by immigrants.

See this and other disinformation cases about Denmark in the video below.

Another example was a modified photo that was circulating in February as “evidence” that European women, rape victims of immigrants, apologise to their rapists. In fact, the original photo was taken in October 2014, and the girl in the picture is not a victim of abuse by immigrants, but a participant of the “ЗігрійГероя” (“Warm the Hero”) campaign in Ukraine. 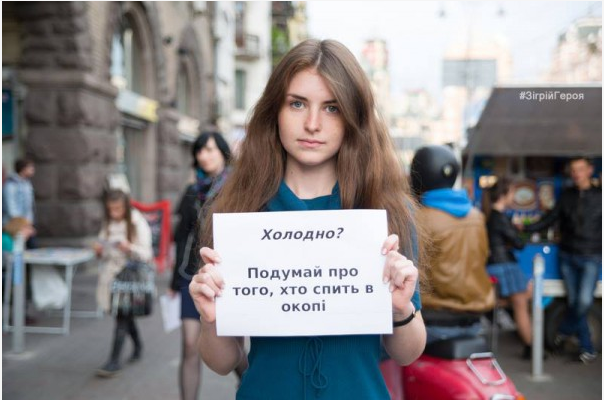 The original photo asked “Is it cold? Think about those who sleep in the trench.”

Discrediting those who expose disinformation

Activist and investigator Lyudmila Savchuk spent two months undercover in the St. Petersburg troll factory in late 2014, and later won a lawsuit against the troll farm in 2016. She has explained the operations of her former employer in numerous publications and served as a witness in another ex-troll’s lawsuit. The counterattack has been harsh: she has been accused of being a shill for foreign interests, George Soros and the CIA. All are usual tools in the pro-Kremlin disinformation toolbox.

Jessikka Aro, a Finnish investigative journalist, became a target for systematic disinformation campaing after she started to report about pro-Kremlin trolls.

The message these women send to the international community is clear: the aim of the pro-Kremlin disinformers is to discredit and silence them, but in this goal, the disinformation campaign has failed. At the moment, Aro is preparing a book that investigates how Russia has transformed the concept of information warfare.