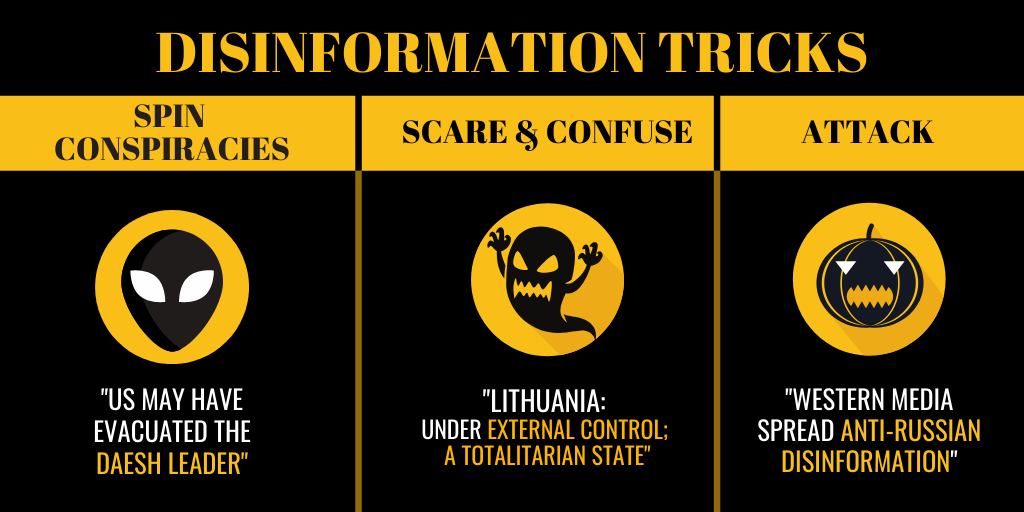 Happy Halloween everyone! Even if this holiday is not widely celebrated where you live, who doesn’t appreciate the fun of trick-or-treating or the ancient Celtic traditions behind All Hallows Eve? But for pro-Kremlin messengers, Halloween is yet another apparition of an invasive Western culture that is hell-bent on corrupting traditional Christian values. This week, a Russian MP suggested that those who celebrate Halloween today will play with rubber women (ahem…sex dolls) tomorrow. Read the full story here. The suggestion is as ridiculous as it is sinister. It plays into the larger pro-Kremlin disinformation narrative targeting mainly Eastern European audiences that any step towards the West will lead down a path of moral degradation and loss of national identity. Thus, the Georgians were told this week that in order to join NATO, they will have to legalize gay relationships; warned that George Soros together with pro-Western politicians will destroy Georgian values, culture and nationality; and reminded that Georgian language and culture were dearly protected under the USSR. None of these statements have any basis in reality.

As the saying goes, the devil’s greatest trick was to convince the world it did not exist. Apparently learning from the best, the pro-Kremlin media are trying to pull a trick and convince their audiences that the truth cannot be known. They do this in various ways, for example by spinning elaborate conspiracy theories to sow doubt and confusion: this week, the pro-Kremlin media claimed that instead of killing the leader of Daesh, the US may have actually evacuated him. Other times, they disseminate contradictory messages about the same subject. For example, Lithuania is both under external control and a totalitarian state! (May we also remind you of the 150+ different disinformation narratives about the Skripal poisoning?). And most insidiously, the pro-Kremlin media relentlessly smear those whose duty it is to investigate and report the facts. Buzzfeed and Bellingcat – which conducted independent journalistic investigations into the downing of flight MH17 and the Skripal poisoning – were accused of spreading anti-Russian disinformation. The OPCW, whose reports on the chemical weapons attacks in Syria fly in the face of attempts to whitewash Assad’s crimes, was blamed for suppressing key evidence in its investigations. And as a cherry on top, French president Emmanuel Macron was accused of “modern-day racism” for calling out RT and Sputnik as agents of influence and propaganda in the past, while Sputnik Deutsch claimed that Russia has never done anything bad to anyone in the information field. Ofcom, the UK media regulator that recently fined RT for breaching the impartiality rules, would probably disagree.

This week EUvsDisinfo story on how the pro-Kremlin media are desperately seeking recognition for the illegal annexation of Crimea was highlighted by @RussianEmbassyC. 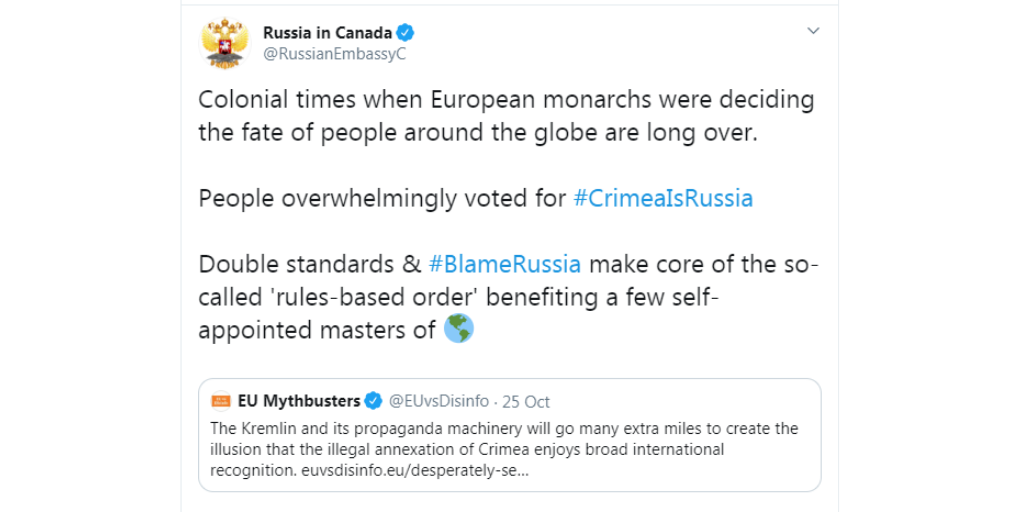 This is hardly the first time that the social media accounts of Russian diplomatic representations spread disinformation. This time we were treated to a full collection of disinformation tactics and narratives in a single tweet: there’s a whataboutist reference to Europe’s colonial past, disinformation about the illegal annexation of Crimea, a reference to the West’s double standards and even a nod to a conspiracy theory about the masters of the world. Coincidentally, this week Sputnik also kept hammering the same disinformation message about a “democratic referendum” in Crimea in English, Arabic, and Serbian. This “referendum” is not recognized either by the EU or the United Nations. Meanwhile, Russian state-controlled TV channels continued to treat their domestic audiences to seemingly endless disinformation about Ukraine, claiming that the EU has turned away from Ukraine, that Ukrainian autocephalous church is a US project and that Ukraine wants to preserve itself as an anti-Russian project.

Some 2000 years ago, the Celts believed that on the night of what is today called Halloween, the ghosts of the dead return to Earth. Perhaps in the same spirit, the pro-Kremlin media resurrected a number of disinformation narratives that originated years ago and have been repeatedly debunked. One example is the Pentagon’s alleged biological experiments in Georgia’s Lugar lab, with the earliest case in EUvsDisinfo database dating back to 2016. Another is the allegation that Georgian snipers shot Maidan protesters in Ukraine back in 2014 (a case that dates back to 2017 at least, and has been extensively debunked). There were also claims that Ukraine is about to disintegrate (going back to 2016). Such “undead” (or should we say zombie?) messages illustrate how much pro-Kremlin disinformation relies on constant repetition and redundancy to create the illusion that multiple independent sources repeat the same message. Much like zombies, this disinformation is out to devour your brain. 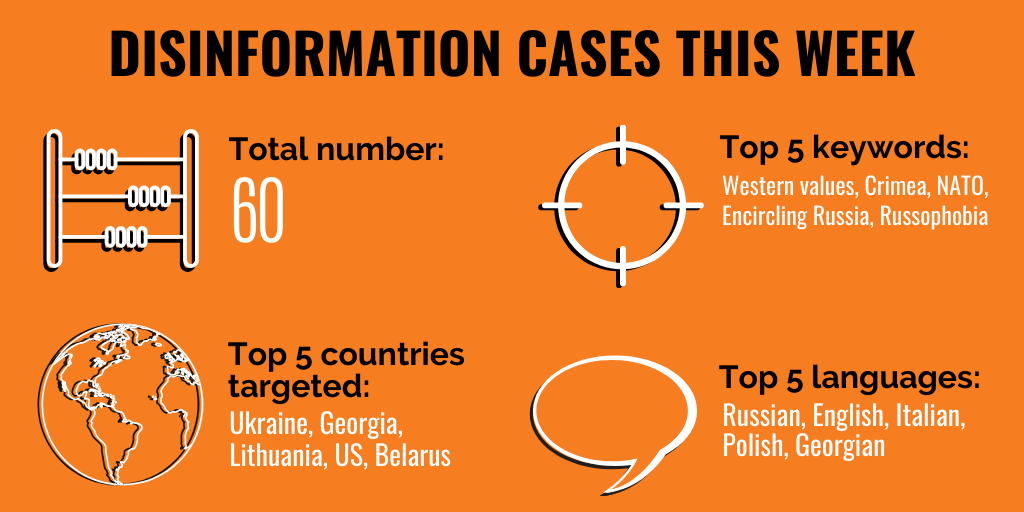