”Do Not Save Bullets – The Recipe for Saving Russia” 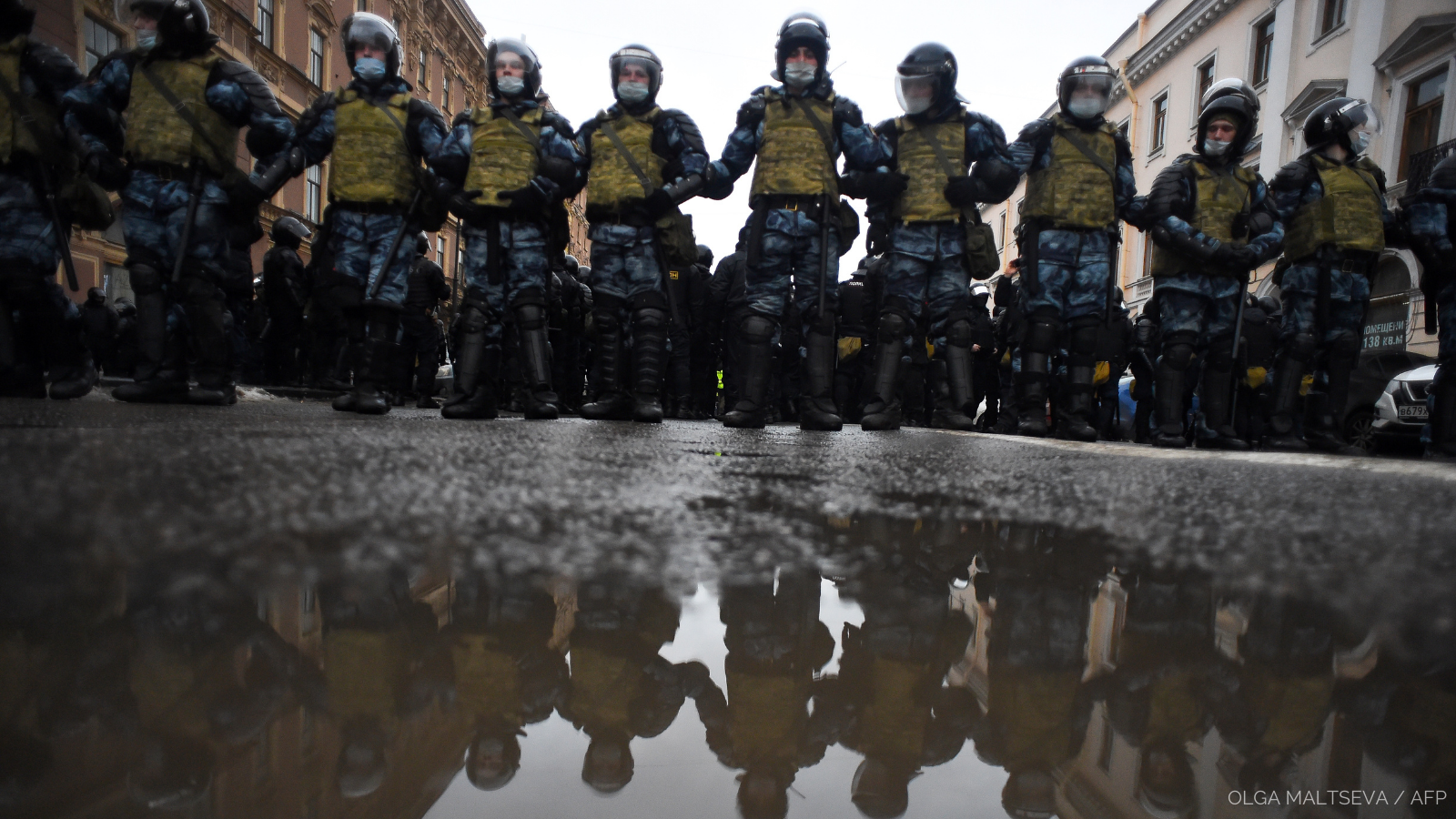 The Pro-Kremlin Disinformation Ecosystem Mobilising against the Protests

The pro-Kremlin disinformation ecosystem is desperately trying to formulate a position on the countrywide protest of Saturday 23 January – “A bubble, about to burst”, “misled teens”, “An uprising of the well-fed”, ”An attempt at a coup d’etat”… But virtually all outlets agree on one point: the protests were managed from abroad; now the authorities must act with firmness.

[The authorities] need to act with maximum firmness and cruelty [жёсткая и жестокая]. Not primarily against the schoolkids in the streets, but against the organisers and the mouthpieces of the riot. Not one single blogger, publisher, political or societal activist who in one way or another called to the protests “for Navalny” must remain free. An attempt at a coup d’etat – and let’s not be fooled, that is what we see – cannot go unpunished.

The outlet calls on the authorities to use live ammunition against the protesters. In an article, headlined “Do Not Shoot Blanks, Do Not Save Bullets – The Recipe for Saving Russia”, Tsargrad offers two alternatives for the protesters:

If we want to defend Russia, those bastards have one choice: prison or emigration.

Saturday 23 January brought tens of thousands of Russians to the street to protest against the detaining of dissident leader Alexei Navalny, against the corruption within the Kremlin leadership, against the stagnant economy of Russia and the lack of basic democratic rights. Independent media reported about manifestations in most major Russian cities. The human rights’ NGO OVD-info reports about over 3,500 people being detained during the protests.

Unlike earlier, this time Russian state TV did give prominent coverage to the Navalny protest – through an aggressive mix of accusations.

Pervyi Kanal, one of Russia’s state TV media channels with significant influence in Russian society, has thrown its full weight into framing the Navalny protest.

On Sunday prime time news, where the week’s events are selected, presented and interpreted for the broad audience, the Navalny protests were blended in with several other domestic issues. All to present an impression of the Russian society under attack: the upcoming Russian Parliament elections under Western influence, public health concerns such as Covid-19 spread during demonstration and even a call to parents to be responsible for the upbringing of children and youth. Finally, the digitally avid public was warned that social media contains pools of fake, fiction and subversion on Navalny’s story.

Berlin and Washington were named as instigators and backers of Navalny and his followers, who are just young, naïve pawns in the West’s cynical chess play with Russia’s future.

One EU-sanctioned TV host and a prominent figure of pro-Kremlin disinformation went further, warning the Russian audience not to give in to political paedophilia:

“Don’t give your kids to political paedophiles, or how Alexei Navalny was deployed to Russia from Germany with a task to fulfil”. 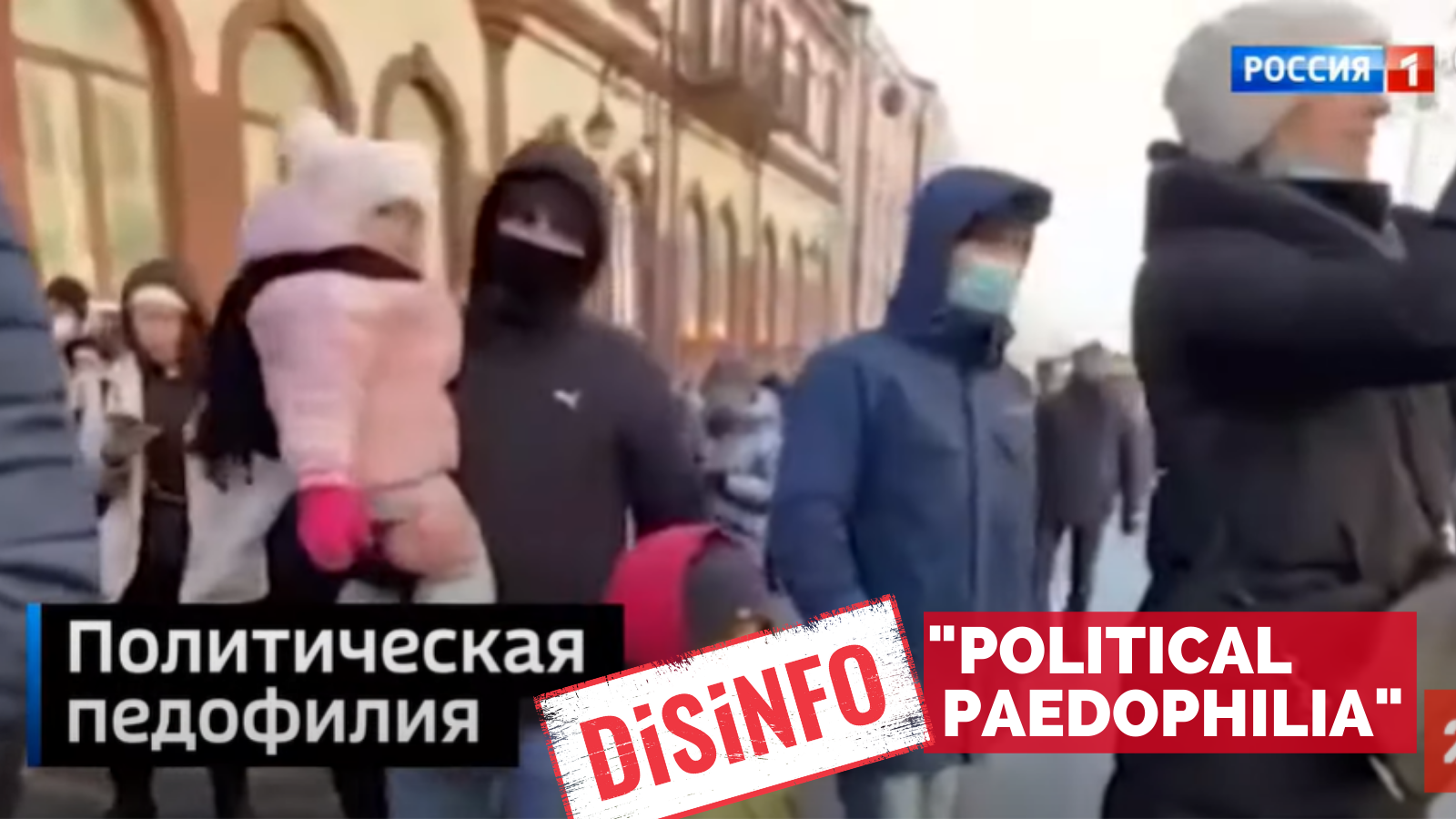 The implication behind a major segment on Sunday prime time TV was clear: “NATO secret services” not only dictated the scenario of Navalny’s latest investigation into political corruption, but also sent him home to Russia to create “chaos”. The protests were allegedly attended mainly by children and hapless teenagers, exploited by Navalny for political gain. Navalny, himself, claimed Kiselyov, was as good a politician as a toilet brush… 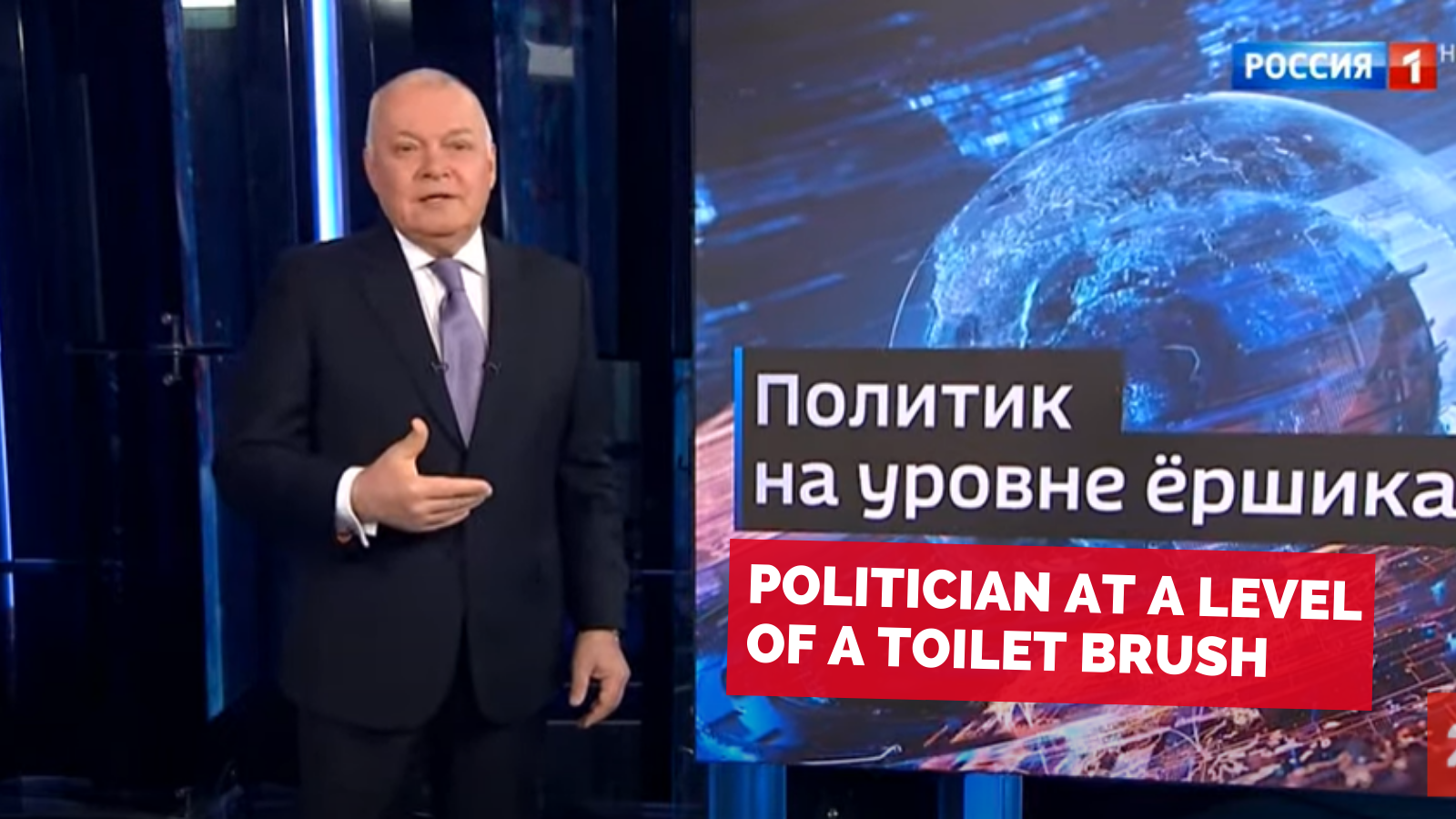 While some official sources belittled the protests, depicting them as small, Russia’s largest daily, the Komsomolskaya Pravda, describes the protests as a “Riot of the Well Fed” and hints of a “total war” against the protesters:

All is very simple: this was a well-fed riot of well-fed people without much concern for their future. This has been a curse of more or less all functioning state or empire throughout history. Maybe someone will understand that our “regime” is very kind and humane. There is no need to bring it to the limit. Because the only way to stop well-fed riots, a method known from Roman, Byzantine and Persian times, is a good, total war.

How much do we need to endure this “dancing” to foreign drums? Is it not time for us to take to the streets? These kinds of thoughts are heard all the time, and this is also unsettling. A real popular rising against the Rat Catchers will be something much scarier than those “walks” in support of Navalny and protests with the slogan “Putin must resign”.

The suggestion that Navalny, similar to the Pied Piper of Hamelin, hypnotises children to become unwitting pawns in his own battles is a central element of the pro-Kremlin media. This has a double function: it demonises Navalny and belittles the protests.

South Front, generally an English language outlet, with some challenges to the English, follows the same Kremlin talking points calling the protests “A Children’s Crusade”:

The Russian neo-liberal opposition has once again demonstrated that it is ready to use any dirty tricks and even use children for its own political purposes. The leaders of these pro-Western groups are in fact not associate themselves with the Russian state and the Russian nation and use populist and anti-government rhetoric just as a tool of serving the interests of their foreign sponsors as well as increasing their own wealth.

(“Are in fact not associate themselves with the Russian state and the Russian nation” – we agree, English is not an easy language)

This brings us to the blame part. The pro-Kremlin outlets aggressively point fingers in virtually every direction. Russia’s Ministry for Foreign Affairs accuses the US Embassy in Moscow of “issuing instructions” for the protests.

Once again, the US Embassy in Moscow demonstrates its disregard for diplomatic norms and rules, actively sharing messages in support of the un-sanctioned manifestations in Russian cities. In essence, this constitutes an instigation to violence, hypocritically disguised as a peaceful protest where the organisers cynically attract minors.

We can see the “usual suspects”: Western Secret Services, the US Democratic Party, Soros, neo-liberals… All the usual enemies, pulling their usual strings to, as usual, to perform “colour revolutions”. Nothing very original here. But South Front brings forward a new enemy: online platforms. Many participants used the Chinese social network Tik Tok to spread the word about the planned protests, producing memes, videos and sharing details on where to meet and what to do. South Front comments:

The Chinese political leadership, who has control over TikTok, allows it to manipulate Russian news feeds. It is interested in putting pressure on the Kremlin to obtain additional leverage in negotiations with the Kremlin, after which Beijing will be able to use the necessary mechanisms and calmly remove such “political oriented” content.

In the Kremlin’s logic, any expression of popular discontent is an attack on the fundaments of the state. 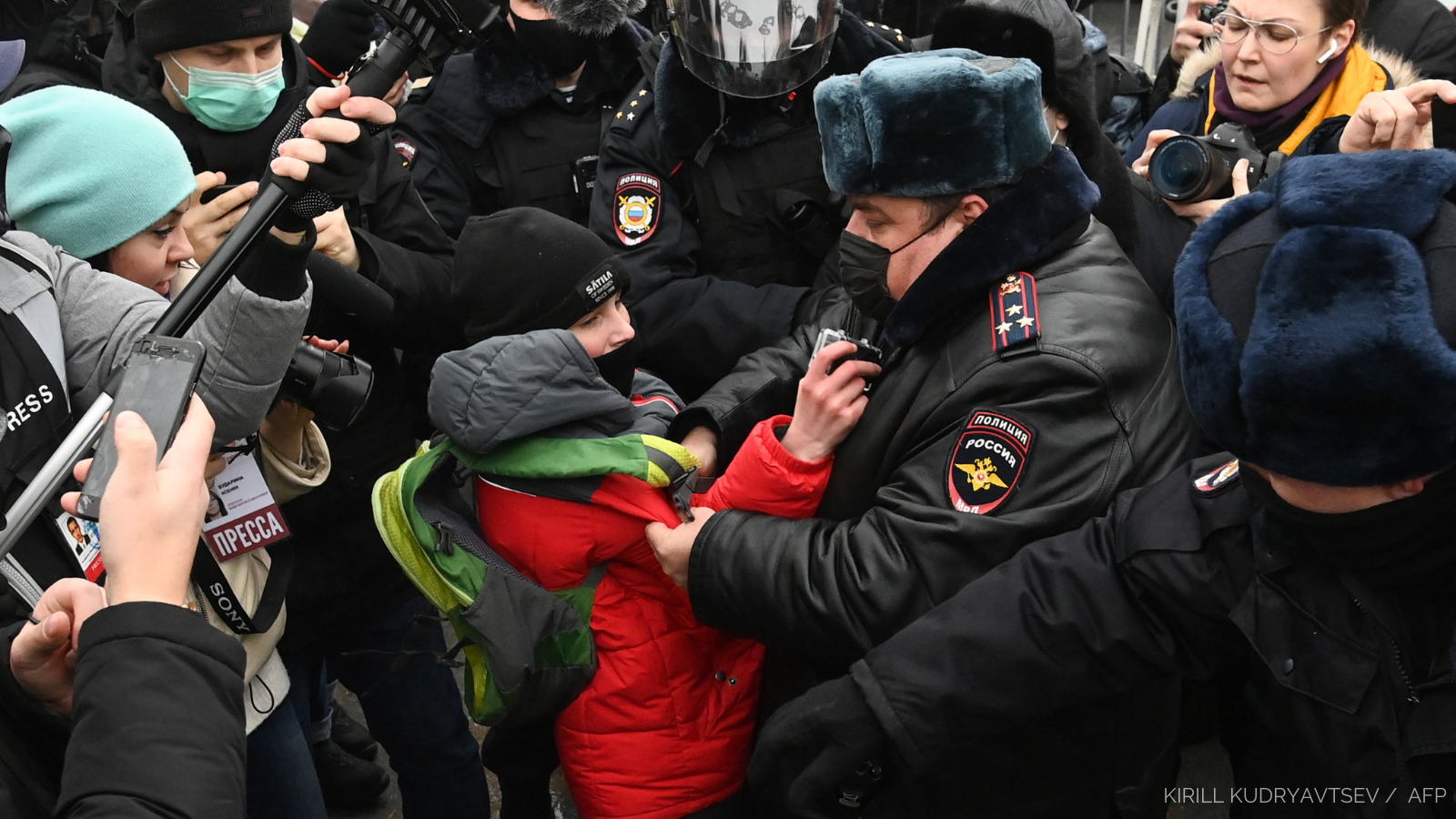