Skip to main content
Read this article in Русский
News and analysis
January 13, 2021

Dugin and the Discourse of Deception 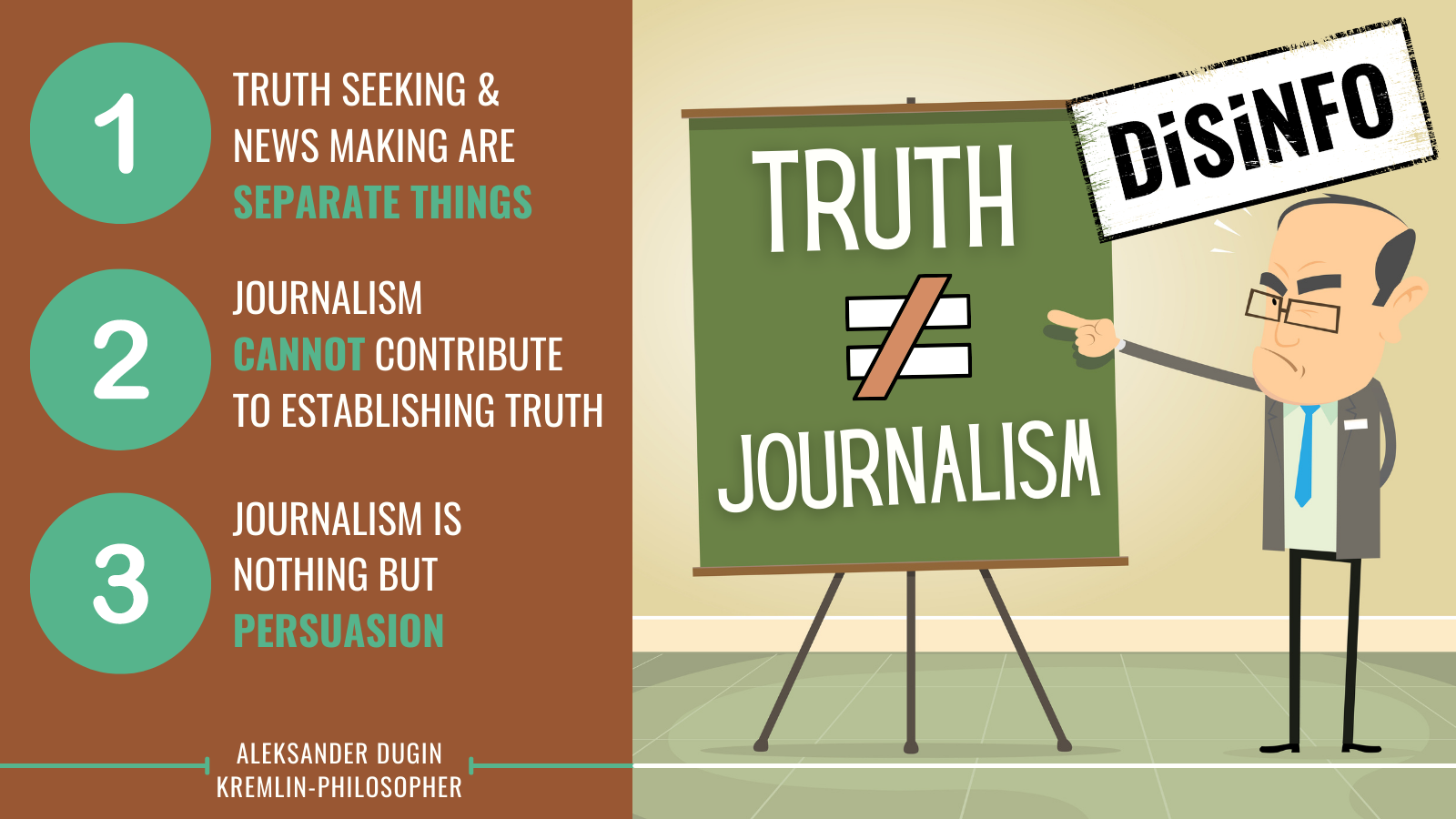 On January 6, Kremlin-philosopher Aleksander Dugin shared a Facebook post. It carried no greetings on the upcoming orthodox Christmas. Instead, Dugin delivered a three-step argument on truth and news: 1) truth seeking and news making are separate things, 2) therefore, journalism cannot contribute to establishing truth, 3) ergo, journalism is nothing but persuasion: “the news become true if you believe them.”

Dugin is no stranger for one initiated in the world of disinformation. He is known for his critique that the West leans too heavily on enlightenment ideals. The West has become decadent and perverted, like the old Athenian society, whereas Russia represents the heroic Sparta. Last year we wrote about his debate with the French philosopher Bernard-Henri Lévy. In 2015, he stated the US government was supporting Islamic terrorism. Last summer, in our database we recorded a case claiming Dugin is demonised because he fights the ideological aspects of liberalism.

Dugin immerses himself rather enthusiastically in the public debate, so it is remarkable he apparently thinks his own contributions are not true. Let us take a closer look at his post:

“The news as such cannot be true or false by definition. The truth demands long, profound and diffucult philosophical search. We can hope to find something close to truth in Plato or Hegel. But it is ridiculous to expect the same in newspaper. Newspapers or social services are made for in-formation, persuasion – not for truth. They try to affect doxa, produce opinion. So the problem of “fake news” is wrongly formulated from very beginning. The expression itself (as other expression “conspiracy theory”) betrays the manipulation and political propaganda. The news become true if you believe them. They are false if you don’t.”

If we break down his post to its logical core, two elements remain; truth and journalism. And, according to Dugin, they exclude each other; truth ≠ journalism.

When Dugin talks about truth in the post, he refers to Plato and Hegel. This indicates he is talking about Truth with a capital T. The great philosopher Plato wrote about metaphysical, semi-religious, truth. This truth has only shapes; the pure ideas. Behind the scenes, they structure the world we human beings perceive with our eyes. So, the truth is somewhere “out there”, it is absolute and only attainable by very special people, the so called philosopher-kings.

However, since the Enlightenment, other ideas of truth gradually gained ground. Crudely speaking, these ideas boil down to more empirical and process oriented approaches. Modern science does not always oppose the old ideas on truth completely, but it is clear the two approaches are quite different and in some tension.

When Dugin talks about truth, he is clearly talking about the old idea of truth. The funny thing is, when you take that idea and add it to the formula (truth ≠ journalism), we recognize Dugin’s reasoning in itself is sound. The quest for metaphysical truth and journalism are obviously different. However, in that case the claim “journalism ≠ truth” also loses its significance.

Armed with a more empirical idea of truth, the matter changes entirely. It becomes clear that journalism can contribute to truth. We do not even need philosophy to realize this. In the field of disinformation, we saw how Carole Cadwalladr exposed the Cambridge Analytica scandal. Or take the Belllingcat investigation, that concluded Russia was responsible for the MH17-disaster and which was later confirmed by the Dutch-led international joint investigation team (JIT). Also outside disinformation, there are many examples of journalists who discovered truth. Famous examples are Murrey Marder, who in 1953 began coverage of Senator McCarthy, finding that the senator’s charges against US Army personnel were all false. In the 70’s Bob Woodward and Carl Bernstein revealed the “Watergate scandal”. In 2018, the Guardian exposed how Brazil is “waging war” against its own rainforest.

Although modern science is principally uncertain about the ultimate truth, it provides clarity that some statements are not true. The well-known philosopher Karl Popper called this falsifiability: the capability of a claim to be contradicted by evidence. For example, “all swans are white” is falsifiable. You need only one black swan to disprove it. Whereas, “this human action is altruistic” is a non-falsifiable statement. This is because we have no instruments to decide, whether or not an action is driven by self-interest.

Because science and journalism produce insight into what is not true, we can also determine what therefore is disinformation, which the European Union defines as:

“false or misleading content that is spread with an intention to deceive or secure economic or political gain and which may cause public harm.” 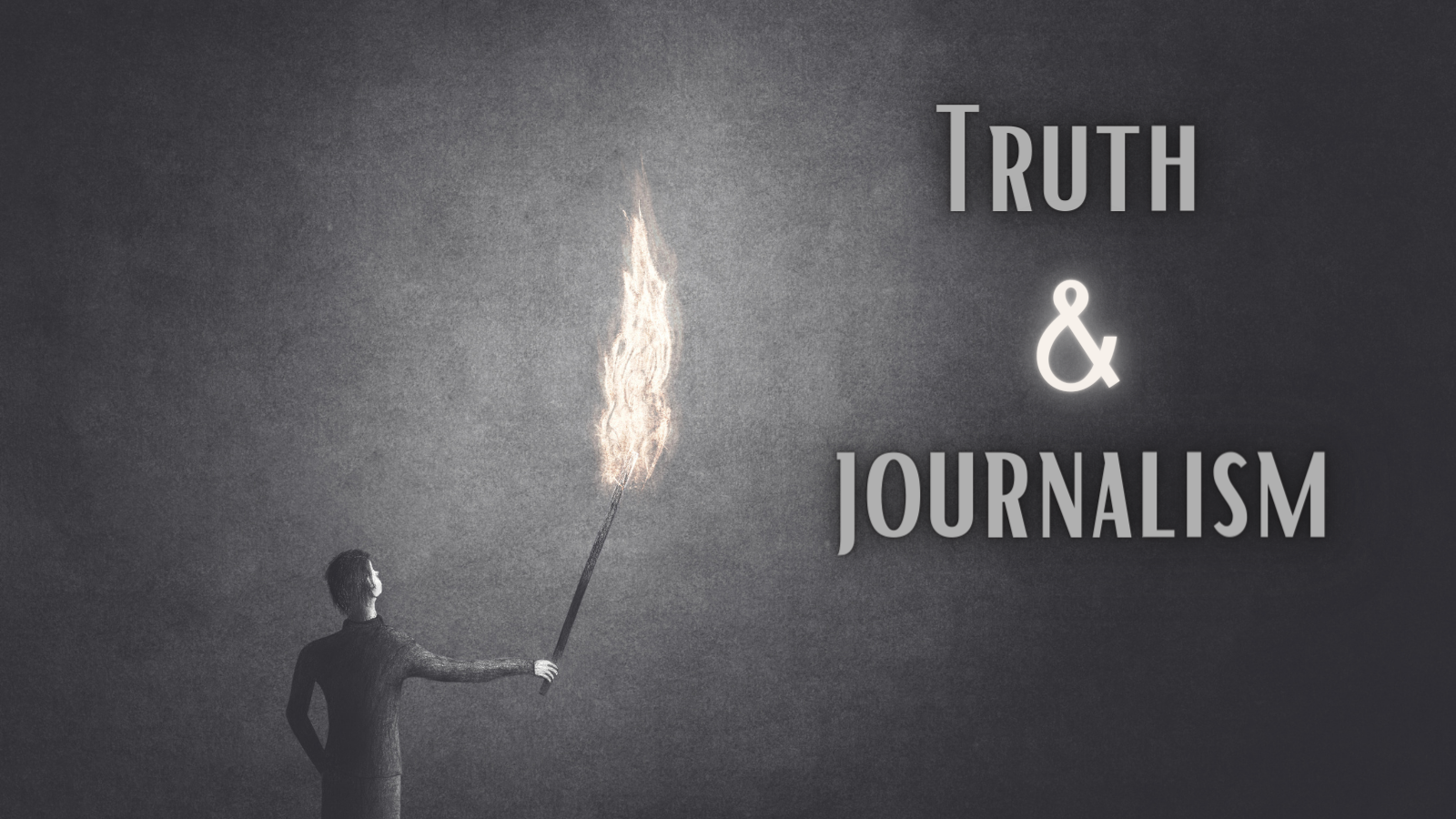 We cannot blame anyone for misusing an old philosophical idea. We cannot blame Mr Dugin for undermining his own contributions to the public debate. Nevertheless, there is also something serious going on. Dugin’s way of thinking legitimizes the spreading of disinformation and undermines the position of journalists.

If news is only about persuasion, what could be wrong with adding a little bit of persuasion into the mix? If journalist are merely brokers of influence, why should anyone want to protect them? These ideas contribute to a climate in which disinformation spreads easily and journalist are threatened.

How can we answer the question of why Dugin is participating in the public debate, which he thinks is only a vehicle of persuasion in the first place? Dugin’s post underscores that perception of a statement is not based on facts, or a certain view on the facts, but rather on the relation to the source. What determines his views is one thing: loyalty to the one who represents Russia.