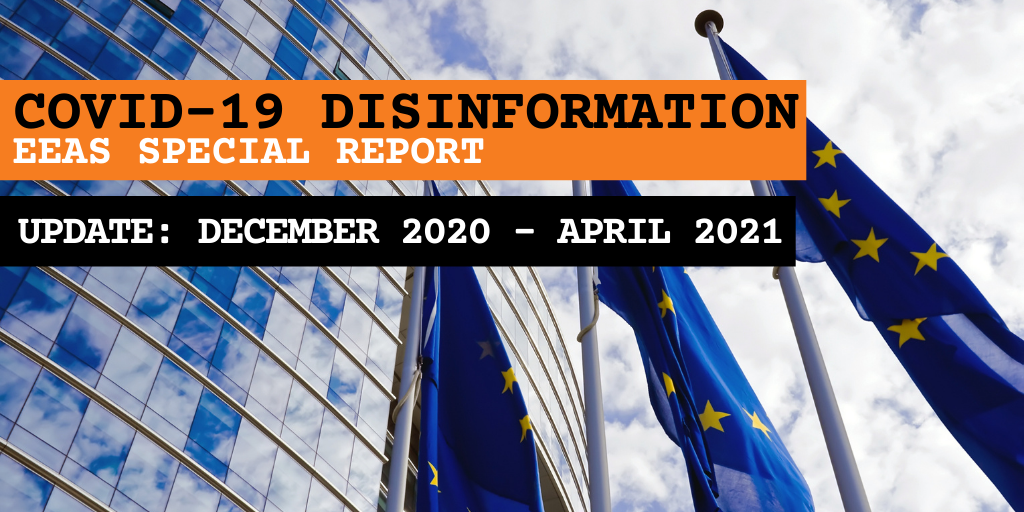 Disclaimer: The objective of this report is to provide a snapshot overview of the current trends and insights into disinformation activities related to COVID-19/Coronavirus. The report builds on the findings of previous EEAS special reports on this subject, notably the update covering May-November (2020)[i]. In the period of this period, it became clear that yet another type of information manipulation had manifested itself; an aggressive promotion of one type of vaccines and state strategy while denigrating others. This report draws on open sources, does not provide a comprehensive or complete overview and focusses primarily on the external dimension, in line with the European External Action Service (EEAS) mandate. The report was authored by the EEAS Strategic Communications and Information Analysis Division, which contributes to the EU’s efforts to counter disinformation, including through detection, analysis and exposure of disinformation campaigns. In addressing disinformation and identifying and analysing disinformation surrounding the COVID-19 pandemic, the EEAS is working closely with the European Commission, European Parliament services and EU Member States. The EEAS also cooperates on this issue with international partners (G7, NATO and civil society). The results are regularly published on EUvsDisinfo.eu and social media channels. Insights are shared with EU institutions and EU Member States in real time, including through the Rapid Alert System on Disinformation.

The revival of the “secret labs” narrative

Disinformation and vaccine hesitancy inside Russia

[v] For example on 30 March 2021 Russian Foreign Intelligence service released a press statement accusing “European bureaucrats” of taking “urgent measures” to discredit the Russian vaccine. http://svr.gov.ru/smi/2021/03/o-podkhode-es-k-vaktsinatsii-naseleniya.htm More recently, the spokesperson of the Russian Ministry of Foreign Affairs was quoted by the Russian media as accusing the West of trying to “neutralize” the positive effects of Sputnik V vaccine, in the backdrop of its own problems countering COVID-19. https://ria.ru/20210419/vaktsina-1728945875.html

Serbia seems to encourage some competition to boost vaccination rates and have plans for local production of both Sputnik V and Sinopharm vaccines, in addition to the current purchases of AstraZeneca and Pfizer/BioNTech. On 11 March Serbian officials announced the intended start of Sputnik V vaccine production in Serbia by 20 May, and President Vučić, while visiting the UAE, stated that he agreed with the UAE and China that the production of the Chinese Sinopharm vaccine in Serbia should begin by 15 October 2021.

[xiii] A scan of RT and Sputnik News agency reporting on its many different language platforms shows the simultaneous promoting of key news stories. See: https://euvsdisinfo.eu/the-battle-for-shoulders-which-vaccine-should-be-injected/ or here https://euvsdisinfo.eu/dizzy-by-vaccine-disinfo-capturing-vaccines-rollout-in-the-eus-neighbourhood-and-russia/

[xvii] In December 2020 the European Medicines Agency came under a cyberattack, following which unlawfully accessed documents and email correspondence related to COVID-19 medicines and vaccines have been leaked on the internet. The criminal investigation into the data breach was launched. The Dutch media have implicated Chinese and Russian hackers in attacking the EMA. See: https://www.ema.europa.eu/en/news/cyberattack-ema-update-6 and https://www.volkskrant.nl/nieuws-achtergrond/russian-and-chinese-hackers-gained-access-to-ema~bdc61ba59/

[xviii] Claims regarding the submission of the rolling review application to the European Medicines Agency appeared on the 9th of February 2021, with multiple Russian media outlets claiming that the application was submitted on the 29th of January 2021. More recently Sputnik V Twitter account claimed that the application was submitted on the 22nd of January 2021. The European Medicines Agency denied the claims on the 10th of February 2021, and published a press release once the rolling review of Sputnik V vaccine began on the 4th of March, 2021. For details see:

[lix] President Putin has occasionally hinted that Sputnik V should be given to Russians first before other markets are served. See also: https://pism.pl/publications/Russias_Problems_in_the_Vaccine_Race

[lxi] Claims of readiness to begin the production in Italy, Germany, France and Spain featured prominently on Russian media, for example on 15 March 2021. However earlier on March 9 2021, rance denied that French companies signed an agreement for production of Sputnik V. See: https://www.youtube.com/watch?v=Eo-fNEwO6OQ; https://rg.ru/2021/03/15/sputnik-v-budut-vypuskat-v-italii-ispanii-francii-i-germanii.html; https://www.reuters.com/article/us-health-coronavirus-france-vaccine-idUSKBN2B11M0

Recently, localised production of Sputnik V was agreed in India and Belarus. See: https://www.youtube.com/watch?v=Mi-ZNmC0om4 and https://tass.com/world/1270469