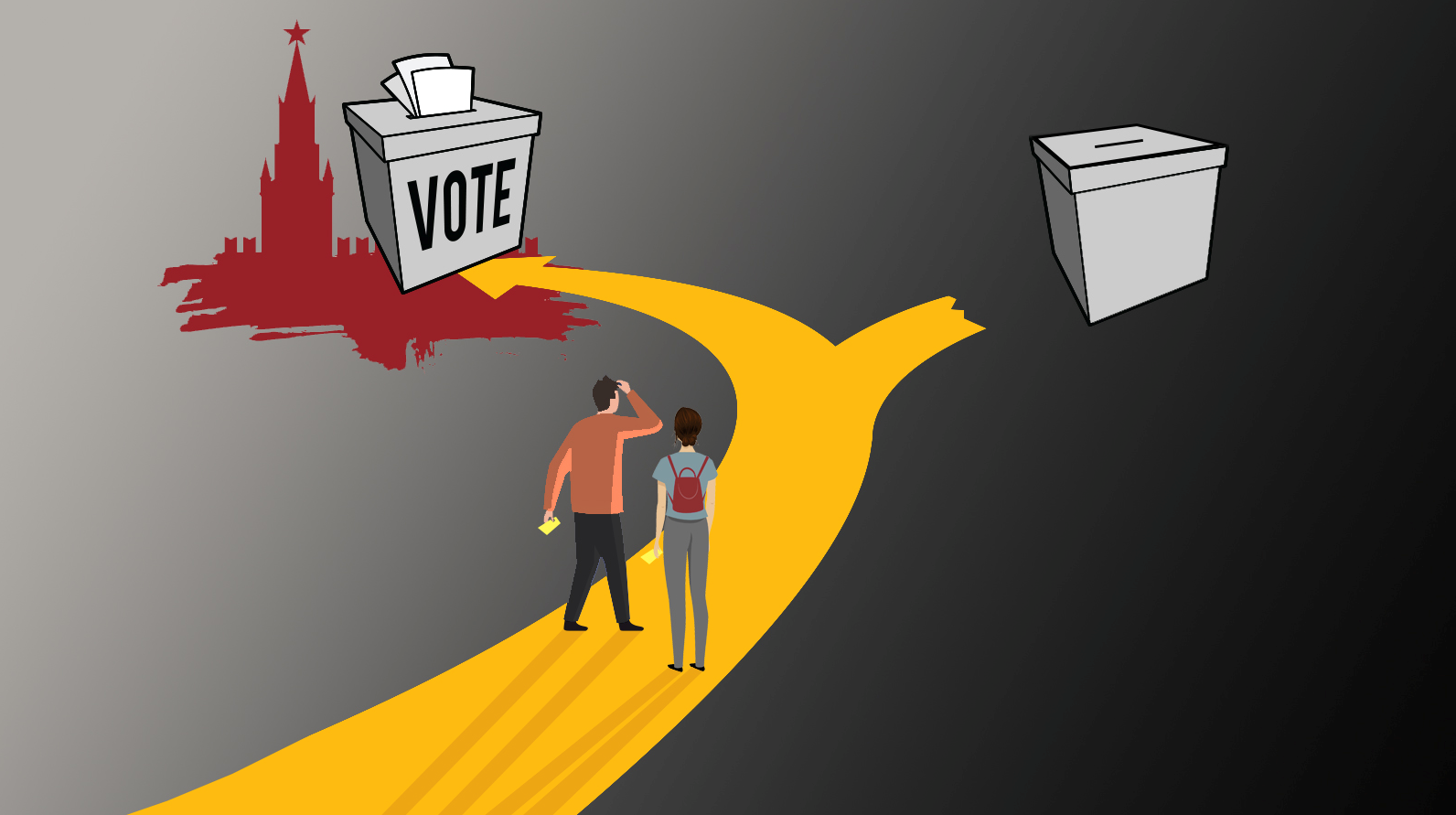 Just a few weeks are left until the Russian legislative election. However, instead of pre-election staples – political debates, analysis of party programmes and similar introspection – the airwaves in Russia are filled with harrowing (and false) stories about the US and Afghanistan.

With some exceptions though. Recently a number of Russian officials and pundits have claimed that the West was hell-bent on discrediting the Russian election. According to the head of the Russian Central Election Commission, the OSCE was fulfilling a “task” to discredit the Russian election, by a priori shaping public opinion that the elections may be illegitimate. This, like similar messages in the past, came in reaction to the organisation’s decision not to send an election observation mission after the Russian authorities imposed last-minute limits on the number of election observers, essentially undermining the mission’s effectiveness and credibility. The Russian authorities cited the epidemiological situation for this decision; however, according to the OSCE, at present no pandemic-related entry restrictions or rules about operating and moving within the country would seem to prevent the deployment of a full election observation mission.

The European Parliament, ever the target of pro-Kremlin ire, was also accused – this time of specifically planning a debate on EU-Russia relations in mid-September, to arrange a provocation before the start of the vote. According to a member of the Russian Federal Council, all sorts of “destructive actions” will be taken, to “substantiate the draft statements already written in the [Western] capitals on non-recognition of the results of the Russian elections in 2021”. (Speaking of pre-written statements and pre-determined election results….)

Such messages are disseminated to pre-emptively discredit any and all criticism of the Kremlin for the unprecedented crackdown on meaningful democratic institutions in the country. By inventing sinister “Western” plots and provocations, the pro-Kremlin media and pundits wilfully ignore and obscure the dark reality on the ground: reprisals against critics and elimination of political opposition with methods that range from cold-blooded to bizarre, censorship and restriction of media freedoms and freedom of expression. 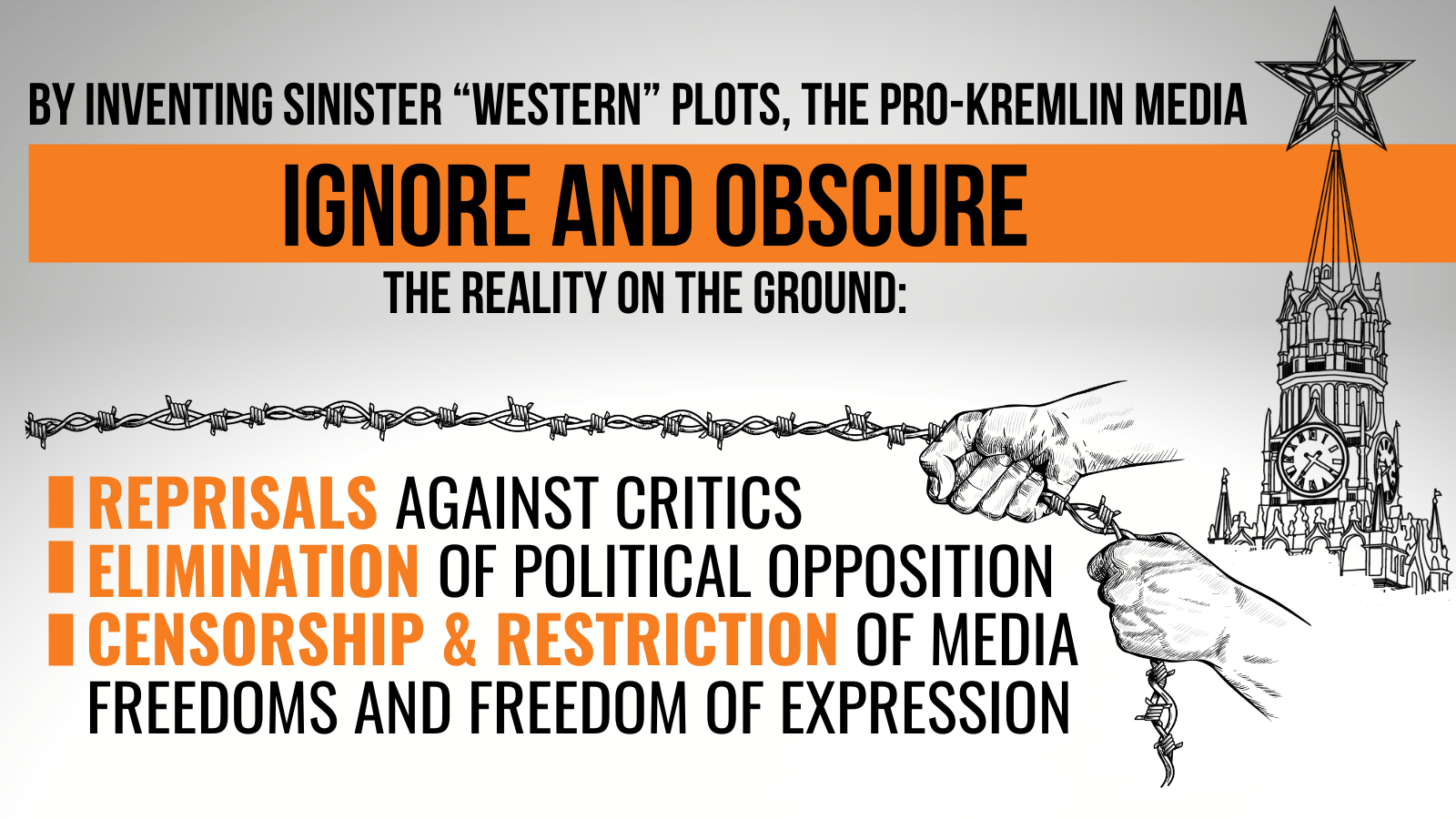 The narrative of “encircled Russia” is one of the most prominent tropes of pro-Kremlin disinformation, and it is proving useful ahead of the election too. Inspired by the recent publication in a venerated journal of military theory which alleged that “mental warfare” is being waged against Russia, pro-Kremlin pundits are on the prowl for enemies – mental and physical ones.

This week, it is the transnational corporations, allegedly trying to destroy states, families and traditional values, whose representatives are paid to “corrupt Russia”. Such messages, accompanied with calls to introduce censorship are just the latest example of a succession of disinformation claims alleging that the West was “attacking” Russia with liberalism, gender politics, NGOs and activists.

On the ground, Ukraine remains designated enemy number one, accused this week of being Washington’s instrument against Russia, waging genocide against the Russian-speaking population in Donbas and of attacking Russian sovereignty and territorial integrity (!) with its Crimea Platform.

Elsewhere, the EU was said to pursue a policy of containment and intimidation against Russia; even the Tatar minority in Lithuania is a weapon against Moscow!

In the past, the pro-Kremlin media went to disturbing lengths to mobilise voters ahead of elections and to boost turnout, for example by suggesting that unless people show up and vote, forced homosexuality will become a norm in Russia. This time the daily effort to draw an image of Russia under (Western) siege conveys the message that the only possible outcome of the election should be a decisive victory over internal and external enemies.

And the Winner Is…

Date
Title
Outlets
Country
Leaving Afghanistan, the US military shot at the crowd of Afghans, killing children
Afghanistan
Lithuania is using Tatar minority as a weapon against Moscow
Lithuania, Russia
There is good reason to believe that biological weapons are developed in American laboratories
Russia, US, Ukraine, Kazakhstan, Armenia, Georgia
The West will organize events to discredit elections in Russia
Russia
Global elites overthrew Donald Trump
US, Afghanistan
The OSCE has a task to fully discredit the Russian election
Russia
Ukraine refuses to implement Minsk agreements
Ukraine, Russia, US
New traditions of the US army: American soldiers shot at the unarmed crowd in Kabul
Afghanistan, US
Transnational corporations aim to destroy the Christian world
Russia
Political disagreements are behind the halt of the NATO-Russia Council
Russia, Ukraine
Poland declared a state of emergency after the appearance of 32 refugees on its border
Poland, Belarus
Washington uses Kyiv as an instrument against Russia
Ukraine, Russia, US
The West is preparing provocations to discredit elections in Russia
Russia
Russia is not part of the conflict in Donbas
Ukraine, Russia
Poland uses the threat of Russian invasion to justify the presence of the US soldiers
Poland, US, Russia
The Baltic states’ fears of Russia are groundless
Baltic states, Russia
The US can leave Georgia just like Afghanistan
US, Georgia, Afghanistan
Polish fence on the border with Belarus is meant to frighten Poles with a perspective of war
Poland, Belarus
Lithuania does not want to help investigate the genocide of the Belarusian people
Lithuania, Belarus
Poland replaces the anniversary of the WWII outbreak with the date of the Soviet invasion
Poland, Germany, Russia
The US brought Daesh to Afghanistan, trained it and armed it to fight the Taliban
Afghanistan, US
Lithuania fell into a totalitarian dictatorship
Lithuania
Warsaw must call Minsk if it wants to solve the current migration crisis
Poland, Belarus, Lithuania
COVID-19 vaccine will cause more deaths than COVID-19; it is a plot to reduce population
US, Canada, EU
Former Soviet republics are colonies of the West
Moldova, Ukraine, EU
Western campaign against COVID-19 aims to impose control over society
US
Joe Biden's administration uses Russophobia to limit America's gun rights
US, Russia
Crimea Platform was a staged show
Ukraine
The Russian Orthodox Church is being sabotaged by Western countries
US, Russia
The West is trying to influence the State Duma elections
Russia
Ukrainian soldiers are ready to fight for Donbas against Kyiv
Ukraine
The Eastern European “limitrophes” are geopolitical scum unable to protect their borders
Baltic states, US, EU, Ukraine
After the coup, relations between Moscow and Kyiv turned for the worst
Ukraine, Russia
Ukraine will disintegrate into small quasi-states
Ukraine
Europe is a military colony of the United States and European countries are obedient vassals of the Americans
Europe, US
NATO mission has ended with the dissolution of the USSR
US, USSR, Russia
Russia fired warning shots against the British warship breaching its border
UK, Ukraine, Russia
The Crimea Platform is an attack on Russian sovereignty
Ukraine, Russia
People of Crimea legally decided their fate in 2014
Ukraine, Russia
Involvement of external forces in Ukrainian domestic politics made civil war inevitable
Ukraine
Crimea Platform is a US-Kyiv provocation against the territorial integrity of Russia
Ukraine, Russia, US
The West and the US do not take Kyiv seriously and only use it as a pawn
Ukraine, US
The West is gradually abandoning Ukraine
Ukraine, Russia
What is happening in Ukraine can be called genocide of the Russian-speaking population
Ukraine, Russia
Crimea voted for reunification with Russia in full compliance with international law
Ukraine, Russia
Viktor Yanukovych left Ukraine in 2014 after a coup d’état
Ukraine, Russia
The US will flee Ukraine the way it is leaving Afghanistan
Ukraine, Afghanistan
If Western 'maidan' technologies are not stopped, Belarus will face coup and war as in Ukraine
Belarus, Ukraine, Russia
EU policy towards Russia is ‘contain, intimidate and counter’
Russia, EU