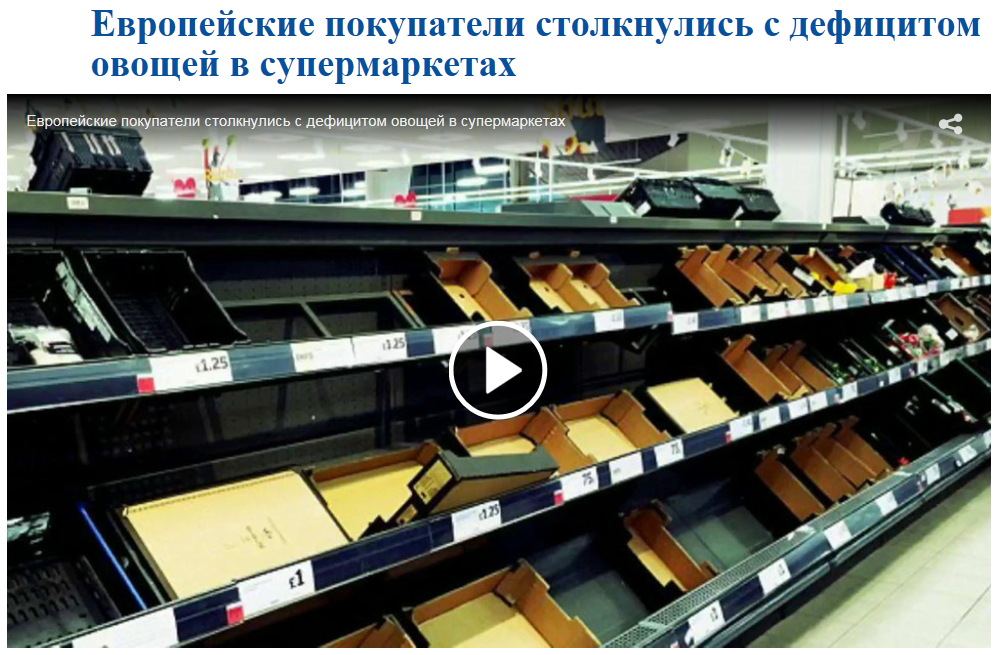 “European consumers face shortage of vegetables in supermarkets”, Russian state-controlled TV Pervy Kanal told its audience earlier this month, and continued: “Stores in the UK, Norway and Denmark are unusually empty. Those supplies that are left in stock are sold only under strict rationing”. Images of empty shelves accompanied the story about the food shortage crisis. The message in the Russian context was clear: The audience should feel reminded of the famous empty stores during Soviet times.

The Russian TV report was based on a news piece by the British tabloid Daily Mail, which tells almost the same sensationalist story under the headline “Supermarkets RATION salads and veg after storms in Spain devastate crops with shortages due to last until APRIL”. So what’s the story? Indeed, The Guardian has also reported about a “courgette crisis” and has documented cases of rationing of iceberg lettuce in some UK stores.

In Norway, the story is very different. Norwegian daily Aftenposten picked up the Russian TV report and wrote a story headlined “Russia’s largest TV channel claims that there is rationing of vegetables in Norwegian stores”. Aftenposten went to check the facts in Norwegian supermarkets. “It is true that unstable weather, rain and frost have led to shortages of some goods. It can have a small impact on price of lettuce and other kinds of those vegetables we import and don’t keep in [winter] storage. However, we cannot recognize the figures [presented by Russian TV]”, a representative of Norway’s largest importer of fruits and vegetables told Aftenposten.

In Denmark, media have also been reporting about shortage of some vegetables that are traditionally imported from the south of Europe. However, according to a representative from Denmark’s market leading Dansk Supermarked Group “prices of a few goods could rise by up to 10%”, as Business.dk reports.

As is often the case, disinformation has a grain of truth to it, which is then inflated and distorted with disregard to the larger context. Here it is the image that changes the impact of the story when it is transplanted to the Russian context where media feature an ongoing narrative about overall decay and despair in European societies.