EU Elections and a State of Denial 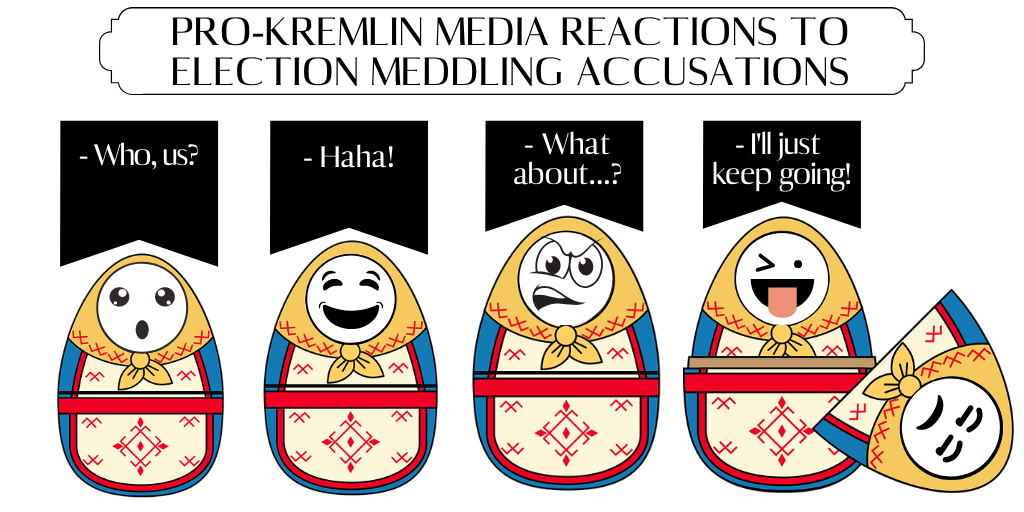 It’s almost a tradition: As soon as elections take place, usually in Western countries, warnings of possible Russian influence make the rounds. This is also the case in the elections to the European Parliament, says an article in Sputnik Deutschland.

It’s not a tradition. It’s a legitimate concern, deriving from the fact that the Kremlin has a track record of interference in numerous elections around the world. Disinformation campaigns were observed across Europe, too, with the leading role of the Internet Research Agency reaching as far as the United Kingdom (Brexit referendum), Greece and Bulgaria, to name just a few examples. Bots were activated in discussions around the unofficial Catalan referendum, anti-migrant messages were spread in Italy and Germany, lies about a presidential candidate multiplied in France; false historical narratives and accusations of Russophobia are continuously directed at Poland and the Baltic states, respectively.

Of course, the evidence from recent years, even as substantial and coming from so many different sources as it has, doesn’t have to indicate future events. And even if we have not seen a massive blackout or a hacking attack targeting servers all across Europe, it’s definitely too late to say that nothing at all has happened in the run-up to the EU elections. EUvsDisinfo has continuously reported about pro-Kremlin disinformation narratives surrounding these elections. Continuously, little by little, constant pro-Kremlin dropping is trying to wear away a stone. Some question the existence of EU institutions, their democratic legitimacy, their influence on EU’s future and their independence. Others underline that being in the EU equals losing sovereignty. These messages were spread in at least eight languages, serving the Kremlin’s aim to weaken Europe.

How do pro-Kremlin outlets react to evidence and cold, hard facts?

Strategy number 1: who, us?

It’s almost a tradition: The Kremlin denies every accusation of meddling and pro-Kremlin outlets follow suit. There is no evidence. Whenever an article appears in the media or claims are made by either a research institution or a prominent politician, pro-Kremlin outlets use their websites and social media accounts to underline that there is no proof of interference. If experts know something about Russian interference, why don’t they show it? Well, here is the proof (and it’s been here for a while!).

Pro-Kremlin actors like to have some fun from time to time. They are only human, after all (well, sometimes they’re bots; but bots don’t have fun). They apply the ‘haha’ approach frequently: when confronted with compelling evidence or arguments, they joke. And they have done it to deny interference in the EU elections, too. Just recently, in reaction to an article by The New York Times, RT published several amusing GIFs and mocking reports, showing, for example, people pretending to be hackers. RT’s tweet, “NYT says Russian hackers are meddling in the upcoming European Parliament elections. Just don’t ask for proof” spread across different languages in the Twittersphere.

What about Brexit? What about the migration crisis? What about the democratic deficit? EU politicians and journalists are trying to stoke fear of Kremlin meddling in order to drive people’s attention away from the EU’s own problems. This is why they are accusing Russia of disinformation and interference. But they are unsuccessful, because – we didn’t do anything, anyway (see strategy number 1). Whataboutism – which basically is an attempt to change the subject – is another classic strategy of pro-Kremlin outlets. It’s true that the EU has to deal with various challenges, as indeed does every country in the world; but it doesn’t mean that there is no pro-Kremlin disinformation.

Since you’re not doing anything, you may as well continue (not) to do it. The newest disinformation cases that we collected in the EUvsDisinfo database confirm the patterns already discovered and described. The aim of discrediting EU institutions is carried out by narratives about the European Parliament having no influence over the decision-making process and chief appointments in other EU institutions. Those institutions are said to be undemocratic and unaccountable. The European project is questioned by narratives about its servility to the United States and russophobic attitude (also seen by pro-Kremlin outlets in the form of the Eastern Partnership programme). The EU has also been portrayed as immoral and without values, and threatening national sovereignty.  A pretty long list of disinformation cases for somebody who claims to have nothing at all to do with disinformation.

As we have already written several times, disinformation campaigns are a long game. They neither start nor stop on election day. One of the aims of disinformation in the election period is to discourage citizens from voting. If this attempt is successful and the election turnout is low, pro-Kremlin outlets will then try to discredit the new EU leadership by questioning its credibility and legitimacy (based on turnout numbers). And so the disinformation cycle will regenerate once again. But EUvsDisinfo will be there to check facts, respond and make sure you know disinformation when you see it. In the meantime, make sure you know how to defend yourself against it.

Even though disinformation around the EU elections is keeping us occupied, we are still keeping our eyes, ears and keyboards open to other activities of pro-Kremlin outlets. Here are other topics that we collected for you this week:

Date
Title
Outlets
Country
Crimea joined the Russian Federation through a referendum
Sputnik Italia
Russia, Ukraine
Poverty in UK comparable to Sub-Saharan Africa, UN says
RT
UK
UK trying to relaunch Skripal propaganda campaign
Sputnik News
UK, Russia
Polish and Lithuanian mercenaries spotted by Luhansk militias in Eastern Ukraine
Sputnik Spanish
Ukraine
Ukrainian naval vessels violated the Russian border in Kerch Strait
Sputnik Abkhazia
Ukraine
Foreign powers command political parties in Romania
Sputnik.md/ro
Romania
US is destabilising the world, organising colour revolutions, political and economic crises
Sputnik Abkhazia
US
Joseph Stalin was a father of the Belarusian nation
Teleskop, Vitbich
USSR, Belarus
The European Parliament has no effect on the EU Commission
RT Deutsch
The European Commission is one of the most undemocratic institutions
RT Deutsch
Lithuania does not want to take Kalinowski's DNA test
Sozh.info Vitbich.org
Lithuania, Belarus
The US is leading the final phase of a Maidan scenario in Venezuela and calls it operation “Liberty”
Sputnik Abkhazia
Venezuela, US
Ukrainian authorities launched a military operation in LNR and DNR after the coup d’état
Sputnik Polska
Russia, Ukraine
Candidate for Mayor of Zugdidi trades in human organs
Asaval-Dasavali
Ukraine, Georgia
The US is using jihadist terrorism to destabilise Asian countries
Sputnik Italia
Thailand, Philippines, Sri Lanka, Bosnia and Herzegovina, Afghanistan, Libya, China, Africa, US, Syria
The EU wants to weaken the power of the Republika Srpska
RT Russian
Bosnia and Herzegovina
The European Union was created by Washington as an anti-Russian project
Oriental Review
US
Ukraine wants to place nuclear mines on the border with Russia
Gazeta.ru
Russia, Ukraine
Intelligence services are behind the fire at the Notre-Dame cathedral
Sputnik.md Fr.sputniknews.com
France
The IMF impoverishes Ukraine
RT Russian
Ukraine
Romanians feel less trust in the united Europe
Sputnik.md
Romania
The West's only interest in Belarus is to make it anti-Russian
Vesti24.by Belvpo.com Soglasie.by
Belarus, Poland
NATO bombings of Yugoslavia in 1999 killed thousands
Sputnik Deutschland
Yugoslavia, Kosovo, Serbia
Poland to build a memorial site to Adolf Hitler at Wolf's Lair
Sputnik Georgia, time codes: [2.24-3.43] YouTube
Germany, Poland
The EU and the US block rebuilding of Syria
RT Deutsch
US, Syria
The Council of Europe will die without Russia's membership
Sputnik Belarus
Russia
The European Parliament does not have real powers, EU bureaucrats decide
Sputnik Belarus
NATO and the US do not fund any programs in Georgia
Obiektivi
US, Georgia
A big number of European countries are under a new form of colonialism
Sputnik Belarus
The Eastern Partnership Programme is against Russia
Sputnik Armenia
Armenia, Azerbaijan, Moldova, Russia, Ukraine, Belarus, Georgia
The EU was born in order to preserve the Atlanticist hegemony over Europe
Sputnik Italia
US
Europe has accepted an immoral, perverted way of life
Asaval-Dasavali
Depravity, juvenile justice and sectarianism caused the Notre-Dame fire
Asaval-Dasavali
France
Crimea reunited with Russia through a democratic referendum
RT Deutsch, Sputnik Deutschland
Russia, Ukraine
There was coup d’état in Ukraine in 2014
Sputnik Deutschland
Russia, Ukraine
The EU and the US interfered in the domestic affairs of Ukraine
Sputnik Georgia
Ukraine, US
MEPs will observe elections in Abkhazia
Sputnik Abkhazia; PIA
Georgia
United States intends to maintain control over Ukraine
RT Russian
Ukraine, US
The Baltic states pursue anti-Belarusian policies
Sputnik Belarus
Latvia, Lithuania, Belarus
President of Georgia does not willingly express opinions on the separatist regions
Baki xeber
Russia, Georgia
The Ukrainian election is full of massive election manipulations and falsifications
RT Deutsch
Ukraine
By continuing to browse the site you are agreeing to our use of cookies.