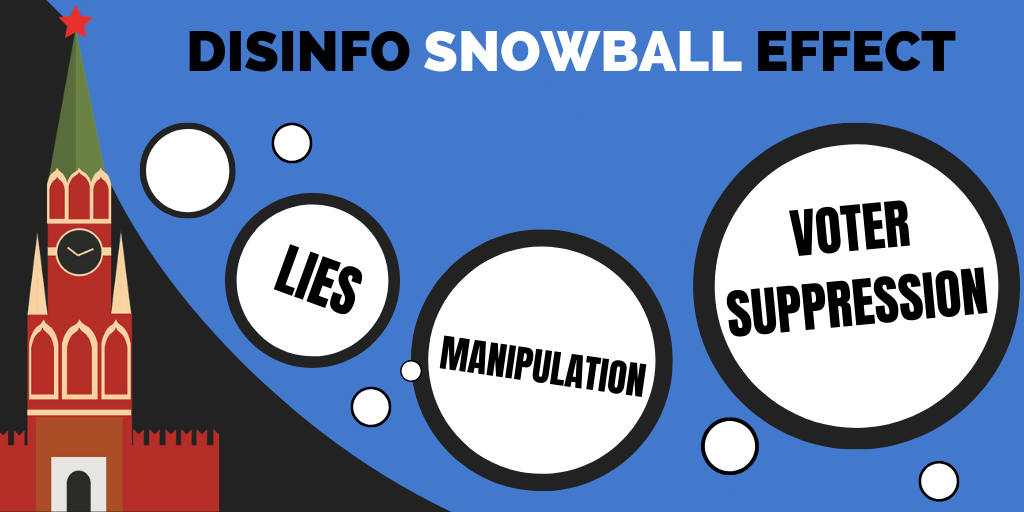 With the European parliamentary elections approaching in less than a month’s time, we devote this week’s Disinfo Review to a brief summary of the ongoing disinformation trends surrounding the elections.

First, a reminder: Russia’s disinformation campaign against the EU – and by extension, its electoral process – has been underway for five years. It is not a new feature of the European political landscape. The Kremlin’s efforts to undermine public support for the EU, promote populist and Eurosceptic parties and candidates, increase polarisation and fragment European unity began in earnest in 2014, and have not relented since.

Russia is playing a long game in Europe: its objective is not merely to influence the outcome of any particular election, but rather to broadly subvert the efficacy of our democratic institutions, fuel widespread social fragmentation and mistrust, and ultimately paralyse our ability to act in our own self-interest and to defend our values.

Using various tactics and disinformation narratives, the Kremlin has been sowing the seeds of this discontent now for nearly half a decade. It has habitually supported populist, anti-EU parties and candidates on both the far right and the far left, attacked the integrity of mainstream politics and media, and emphasised the illegitimacy and futility of elections in a system it alleges to be fundamentally corrupt. Through these efforts, the Kremlin has empowered and amplified other venal and anti-democratic actors to grow their influence in Europe, creating a snowball effect for its anti-Western agenda.

Due to this meticulous groundwork and the long-term integration (and normalisation) of anti-EU narratives in the public sphere, the Kremlin’s attempted manipulation of the EP elections looks far less sensational than other more infamous cases, such as #MacronGate or the 2016 US presidential election. But this doesn’t mean that no manipulation is taking place – on the contrary, the pro-Kremlin media continues to persistently attack the EU, its values, and its democratic mandate whilst simultaneously promoting Eurosceptic voices.

For example, Sputnik systematically features interviews with and updates of anti-EU parties as well as their candidates and positions. Sputnik Poland headlines anti-EU politicians, giving them space and promoting their narratives, while Sputnik Italy has given exclusive attention to the national-conservative Fratelli d’Italia (Brothers of Italy) party. Questioning the legitimacy of European elections on grounds of corruption and the EU’s alleged capture by special interests is another common trope aimed at discouraging voter turnout. 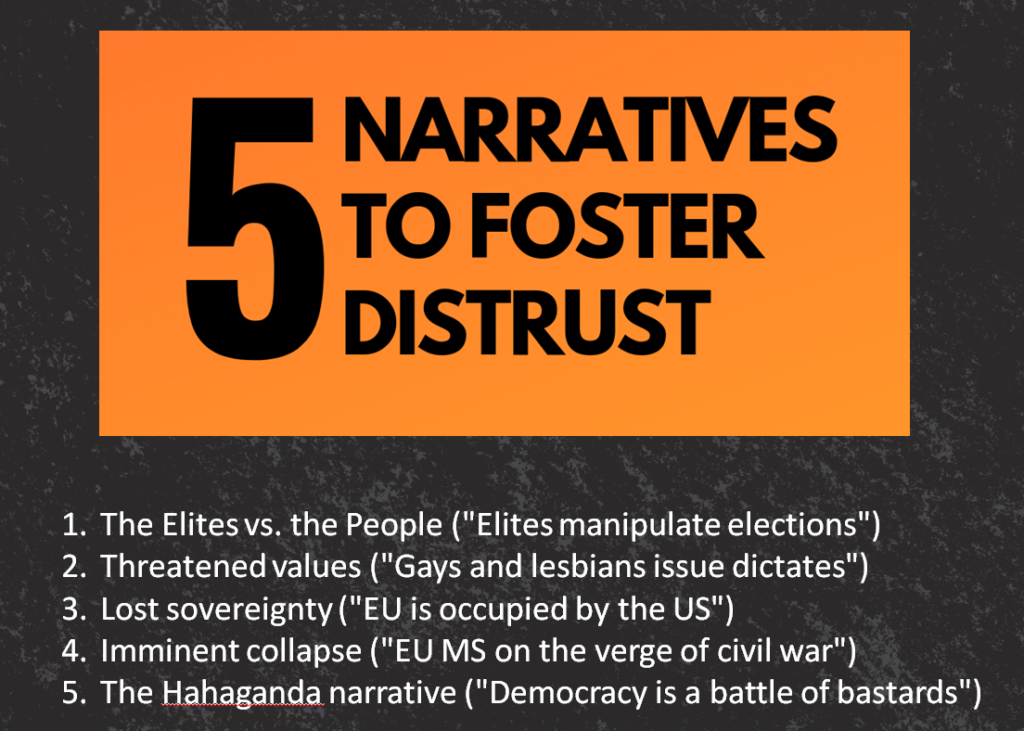 Meanwhile, parties that do not question the EU’s future existence or promote their country’s secession from the EU face relentless criticism. If their top candidates are well-known, like in France, they are often subject to personal attacks. Similarly, mainstream media are accused of being biased and intentionally underreporting on the successes of Eurosceptic parties. Fact-checking initiatives also face growing criticism for supposedly infringing on free speech and promoting a “globalist” agenda.

Of course, the EU itself is subjected to all manner of misrepresentations and false narratives, most of which are grounded in the narrative of “lost sovereignty” or threatened national identity. For example, the EU stands accused of undermining the sovereignty of its Member States: EU gun directives, forced migrant quotas, and Article 7 procedures are all just political tools designed to override national legislation. But that’s not all – the EU actually lacks true independence too, because it is just a vassal of the United States!

Finally, Europe’s progressive values are also consistently ridiculed and portrayed as an existential threat to the Christian moral tradition and conservative family values. The rights of women, ethnic and religious minorities, and LGBTQ groups are particularly popular targets for disinformation. Even the recent tragedy at Notre Dame was exploited for this purpose – proof, apparently, that “our European civilisation is dying.”

The best way to save it, the Kremlin would have us believe, is to give up on democracy entirely. How does that sound?

Date
Title
Outlets
Country
Crimea joined the Russian Federation after a referendum carried out in accordance with the rules of international law
Ukraine, Russia
Europe shows double standards in criticism of Russian and Ukrainian elections
US, Ukraine, Russia
Ukrainian language law allows strict punitive measures and discriminates against Russian-speakers
Ukraine
The majority of newborns in Brussels are from the new Islamic community
Belgium
Facebook is in the service of the US State Department
US
Donbas residents prevented from voting in the presidential elections
Ukraine
The Crimean issue has been removed from Ukraine's political agenda
Ukraine, Russia
Ukraine is a vassal to the US, Nato and the EU
Ukraine
Religious organisations are employed in the Western war against Armenia
Armenia
The US deliberately lowers the threshold of nuclear weapons use and intentionally increases the risk of nuclear conflict
US, Russia
US did not allow Petro Poroshenko to win as he began leading the US into a war with Russia
US, Ukraine, Russia
The European Union is obliged to participate in US wars
US
Ukraine will start issuing foreigners' passports as in the Baltic states
Lithuania, Estonia, Ukraine, Latvia
Russia gave passports to Donbas locals because Kyiv deprived them of any rights and social benefits
Ukraine
Euromaidan was a coup d’etat of the Right Sector and Ukrainian Nazis, supported by the CIA and Poland
Ukraine, Russia
New investigation confirms that Douma's chemical attack's evidence was staged
Syria, Russia
White Helmets admit staging chemical attacks in Syria
Syria
Kurt Volker is funded by Poroshenko
US, Ukraine
Sweden turns resort island into a military shooting range, scaring away the tourists
Sweden, Lithuania, Russia
The EU Parliament is a place of corruption, voting in the elections is worthless
Latvia instigates linguistic genocide against Russian-speaking citizens
Russia, Latvia
Russia's collapse is an aim of Western foreign policy
Russia
Ukraine is a Western tool of anti-Russian policy
US, Ukraine, Russia
The Minsk Agreements are violated because of the Ukrainian strategy to join the EU and NATO
Ukraine, Russia
Ukrainian wealthiest people are controlled by the US and Israel
Israel, US, Ukraine, Russia
The Orthodox church is the main enemy of the zionist West
Russia
With Zelenskiy as president, governance by terrorism will continue in Ukraine
Ukraine
Ukrainian authorities are controlled by Washington and each presidential candidate coordinates with the US
US, Ukraine
Ukrainian oligarchs will divide Ukraine into principalities
Ukraine
West will tolerate Ukraine's agony as long as it doesn’t default on its debts
Ukraine
At least 9 million Ukrainians support civil war, political terror and extrajudicial killings
Ukraine
US is shifting the burden of Ukraine's economic problems on to the EU
US, Ukraine, Russia
The fire at the Notre Dame was a satanic ritual
France
Kerch confrontation was part of Poroshenko's election campaign to receive more anti-Russian sanctions from the West
Ukraine, Russia
Ukrainian police reported a sharp increase in the number of violations in the presidential elections
Ukraine
Ukrainian Military Sabotages Elections in Donbas
Ukraine
Elections in Donbas controlled by “armed Ukrainian punishers”
Ukraine
Kyiv will destroy the whole Russian-speaking population in eastern Ukraine
Ukraine
The debates between Zelenskiy and Poroshenko didn’t raise much interest among Ukrainian voters
Ukraine, Russia
EU laws threaten sovereignty of the Member States
Notre Dame fire is a sign of Europe’s decline
France
Western Ukrainian cities can join the EU by themselves
Ukraine, Russia
Young people organised a dance party at Notre Dame after the fire
France
Turkey may store S-400 missiles in Azerbaijan
Turkey
French journalist: "Zelenskiy impresses Macron"
France, Ukraine, Russia
NATO itself rejected the positive agenda in its relations with Russia
Russia
Georgia bought US Javelin missiles, Ukraine received them as a gift
Georgia, US, Ukraine
Russia is regarded as an enemy in the plans of NATO
Russia
Europe began a mass deportation of Georgians
Georgia
By continuing to browse the site you are agreeing to our use of cookies.