Even the strongest are in danger 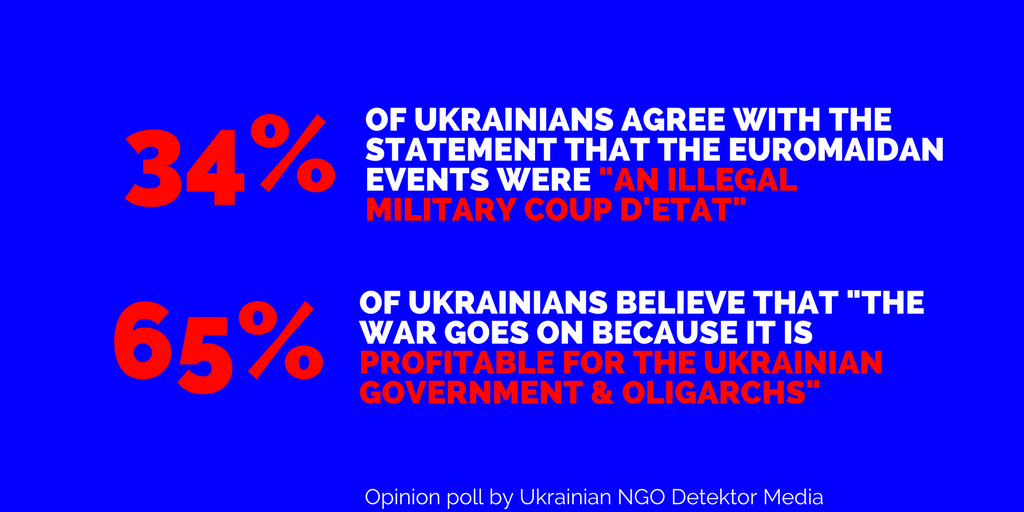 It often seems that Ukraine is one of the best prepared nations when it comes to hostile information influence. The unique experience of a country that has been under information attacks non-stop for the last three years means that the vast majority of officials and journalists in Ukraine are naturally careful about information from pro-Kremlin outlets. Unlike in most of the Euroatlantic space, the people in Ukraine know very well that the role of the pro-Kremlin sources is not to inform, but to mislead, manipulate and frighten their audience.

The results of a recent opinion poll by Ukrainian NGO Detektor Media seem to confirm that this is very much the case among the general public. When it comes to news about military events in the Donbas region, Ukrainian sources are most trusted, whereas the trust in Russian TV-channels is close to zero – only 1,3% of respondents believe their information to be trustworthy. In Eastern Ukraine, portrayed by the pro-Kremlin disinformation campaign as a place where ethnic Russians are defending themselves against a “Nazi” regime in Kyiv, the trust in Russian sources is even lower – no more than 0,8% of respondents find it worthy of trust.

But the very same poll also shows us that a well-funded and persistent disinformation campaign can have results even in such a resilient society. Just as the real war in Donbas is far from over, the battle for hearts and minds also continues to be fought in Ukraine. Some of the propaganda messages multiplied exclusively by pro-Kremlin channels and trolls have a surprisingly strong effect on Ukrainian public opinion. For example:

Detektor Media concludes that Russian propaganda makes the audience evaluate events in contradicting ways: Almost half the respondents believe in parallel that the war continues because of the Ukrainian government and because of Russia. Almost a quarter of the respondents believe that both Kyiv and Moscow are responsible for the failure of the Minsk process. And almost one tenth of the people believe in parallel that the Maidan events represent both a military coup and a popular uprising.

As we have said before, the aim of pro-Kremlin disinformation is seldom to convince us that we should agree with the Russian authorities. Rather, it aims to confuse us, question our institutions and undermine democracies.