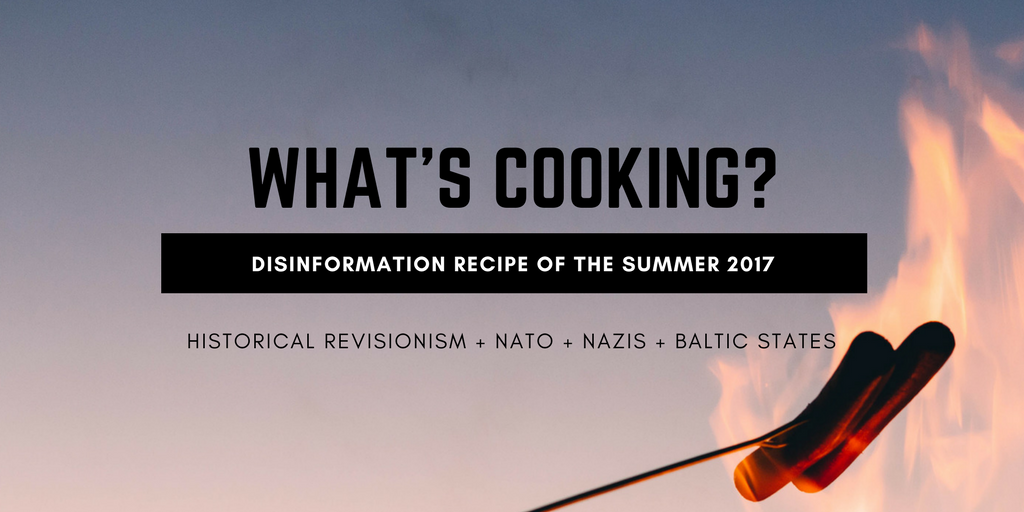 This week we commemorated again the tragic loss of 298 lives on the 17th of July 2014, when Malaysian Airlines flight MH17 was shot down over eastern Ukraine. As the subject of one of the most extensive and persistent of all pro-Kremlin disinformation campaigns, the MH17 tragedy is something we have written about many times before.

This week, entirely predictably, came another blatant attempt to confuse; namely, a story that the flight was not downed by a Russian BUK-missile – as concluded by The Joint Investigation Team (JIT) – but was destroyed by an explosion inside the plane. This, and many other conspiracy theories have been debunked by Bellingcat simply by pointing to the open source evidence that is publicly available to all.

But the main dish of disinformation this week was a mix of several favourite pro-Kremlin ingredients: historical revisionism, NATO, Nazis and the Baltic states. It all started with another commemoration, namely the film produced by NATO about the so called ‘Forest fighters’, the resistance movement against the Soviet occupation of the Baltic states.

We will write about this disinformation operation in detail on our website. Here, let us just say that pro-Kremlin outlets managed to turn this story into claims that NATO glorifies Nazi collaborators – see for example on RT and Sputnik.

This was not the only time that NATO actions were likened to Nazi behaviour this week. For example, the NATO Enhanced Forward Presence in the Baltic states and especially the German-led battalion in Lithuania were said to be comparable to operation Barbarossa.

So, a NATO member, inviting other member countries to train together in order to reinforce NATO’s collective defence is comparable to a hostile invasion of another country by a Nazi regime. Read that sentence once more. Furthermore, NATO was blamed in Sputnik for creating a conflict between Moscow and Kyiv, a claim that clearly forgets that it was in fact Russia – not NATO – that illegally annexed a part of Ukraine in 2014.

As usual, Ukraine is a frequently occurring target in pro-Kremlin disinformation. Some of the more astonishing allegations were even brought to us by the TV channel owned by Russia’s Ministry of Defence. Through the years we have seen some truly outrageous claims about Ukraine, from the ludicrous – for example the claim that the Ukrainian army have zombies fighting within their ranks – to the utterly offensive – most infamously the false claim that Ukrainian forces crucified a three year old boy in the east of Ukraine.

This week, in an echo of that story, we saw the claim that a group of Ukrainian servicemen of the 57th mechanized infantry brigade celebrated a pagan ritual and sacrificed a local resident to a Slavic god. The disinformation was repeated in several outlets, and in one it was illustrated by a photo of a soldier eating a hand. The photo, which has been used in the past by pro-Kremlin disinformation articles, in fact originates from the Russian 2008 science-fiction movie: “We’re from the Future”.

The claim that Ukrainian soldiers sacrificed a person to a Slavic god was illustrated by this image, from behind the scenes of the 2008 sci-fi film “We are from the Future”.

Date
Title
Outlets
Country
Ukraine is controlled politically and economically by the Jews and...
gazetawarszawska.com
Ukraine, US, Poland
During World War II, most of the Baltic Forest Brothers...
Vesti nedeli @ Rossiya 1
Latvia, Estonia, Lithuania
The Dutch-led investigation group on MH17 has tampered with pieces...
newizv.ru
The Netherlands
The presidential elections in Estonia are not at all a...
sputnik.com
Estonia
Donetsk People's Republic intelligence reported that a group of Ukrainian...
kp.ru
Ukraine
Donetsk People's Republic intelligence reported that a group of Ukrainian...
Is in trend now
wolna-polska.pl
Ukraine
There is a need to erase Lithuania from the map
xportal.pl
Lithuania, Poland
A high-ranking source close to the Kremlin claims that the...
mediafax.ru
Russia, Germany, Poland
President Vladimir Putin wants to establish good economic ties with...
ria.ru
Russia, Ukraine
President Vladimir Putin wants to establish good economic ties with...
kresy.pl
Russia, Ukraine
In the relations between Ukraine and the EU there is...
sputnik.com
Ukraine
If Moldova enters the EU, it will break up as...
Argumenti i fakti Moldova facebook page (owned by the Government of Moscow).
Romania, Moldova
The Czech Parliament has approved sending 300 soldiers to support...
protiproud.parlamentnilisty.cz
Czech Republic, Lithuania, Germany
NATO implements its project of training the Ukrainian army to...
sputnik.com
Russia, Ukraine
A NATO film glorifies the Baltic Nazi collaborators known as...
rt.com
Latvia, Estonia, Lithuania
In the movie about the Forest Brothers NATO is praising...
pl.sputniknews.com
Latvia, Estonia, Lithuania
The Czech Ministry of Interior is actively repressing people and...
protiproud.parlamentnilisty.cz
Czech Republic
A quarter of Ukrainians identify themselves as citizens of USSR
tvzvezda.ru
Ukraine
Representatives of the Finnish embassy in Russia are involved in...
iz.ru
Russia, Finland
Finnish authorities may have protected criminals smuggling arms from Russia...
ren.tv
Russia, Finland
Divers taking part in the NATO-Ukraine Sea Breeze exercises in...
sputnik.com
Russia, Ukraine
It is a double standard to perceive the riots around...
rt.com
Ukraine, Germany
G20 riots were paid for by the German government since...
macht-steuert-wissen.de
Germany
The monument to Soviet Glory during the war in the...
ukranews.com
Ukraine
The European Union's Eastern Partnership program has already proved fatal...
sputniknews.com
Ukraine, Belarus
George Soros financed street riots in Hamburg during the G20...
‘Voskresnyi vecher s Vladimirom Solovyovym’ @Rossiya 1 (22:51)
Germany
Kosovo could become an independent state due to the one-sided...
rt.com
Kosovo
The U.S is turning Ukraine into a biological bomb, its...
fondsk.ru
Half of Ukrainian citizens may lack pension due to the...
lenta.ru
Ukraine
The spreading of Western propaganda myths already helped the Baltic...
rt.com
Ukraine
Criminality in Ukraine is now worse than during the 1990s
ukraina.ru
Ukraine
Poland´s ambassador to Ukraine Jan Piekło has proposed the Yugoslavian...
ukraina.ru
Ukraine, Poland
By continuing to browse the site you are agreeing to our use of cookies.