Exploiting the crisis in Afghanistan: Russian and Chinese media draw parallels with Ukraine and Taiwan 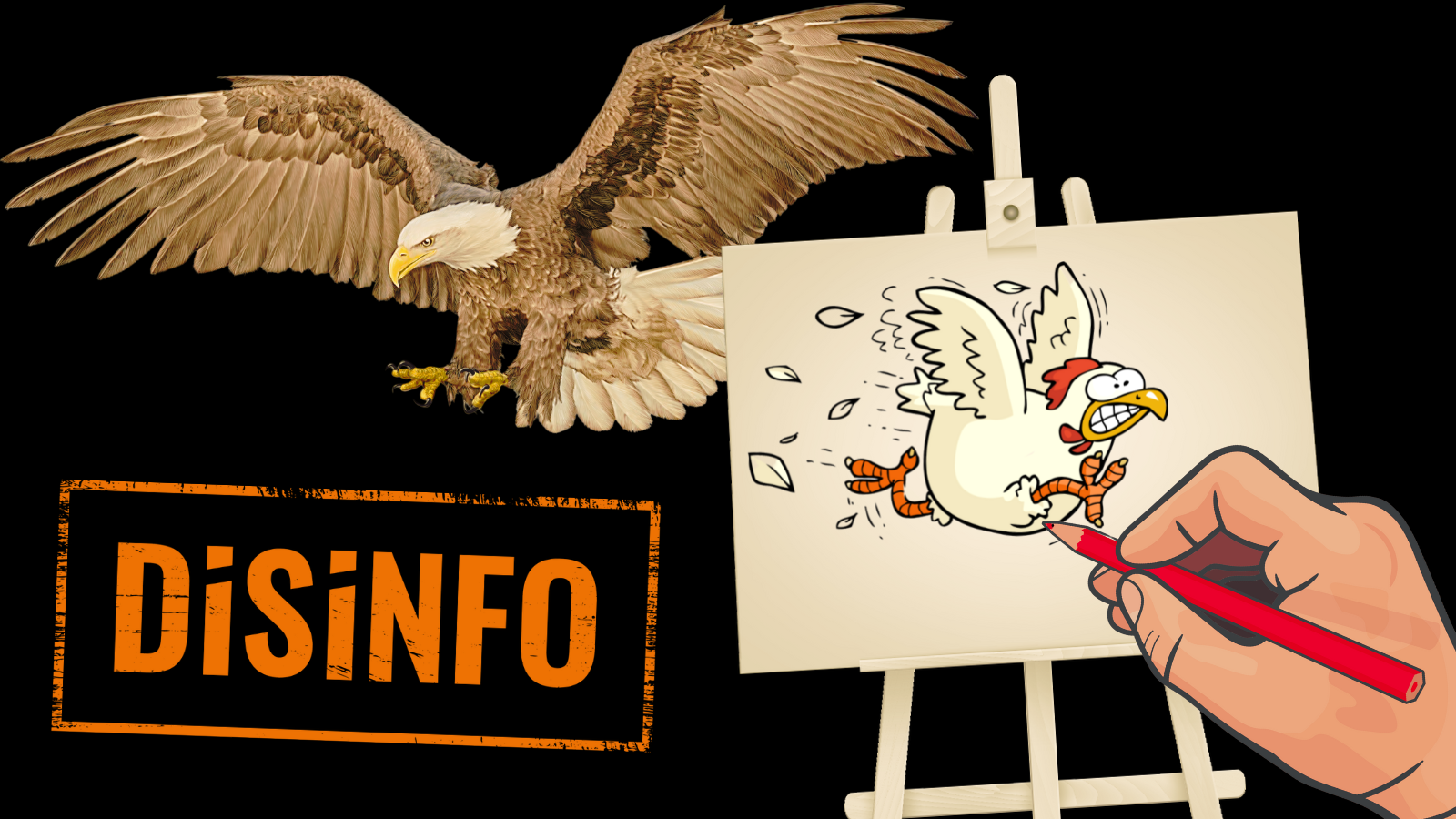 Both Russia and China are exploiting the humanitarian and security crisis in Afghanistan and casting the US as an ‘unreliable’ international partner to project their messages on core foreign and domestic policy issues: respectively, Ukraine and Taiwan.

Almost in unison, Russian and Chinese state-controlled media outlets continue to draw direct (and false) parallels between Afghanistan and Ukraine/Taiwan, alleging that after Afghanistan it was only a matter of time when the ‘unreliable’ US would ‘abandon’ Kyiv and Taipei. Both sides are aiming to capitalise on narratives portraying the US, and by extension the liberal world order, as crumbling and in retreat.

While there is currently no evidence of coordination between the Chinese and Russian outlets, it is noteworthy that as the Afghanistan crisis unfolded Russia and China’s foreign ministers stressed their need to cooperate and strengthen their strategic communication – a claim reaffirmed by Vladimir Putin and Xi Jinping a few days later. 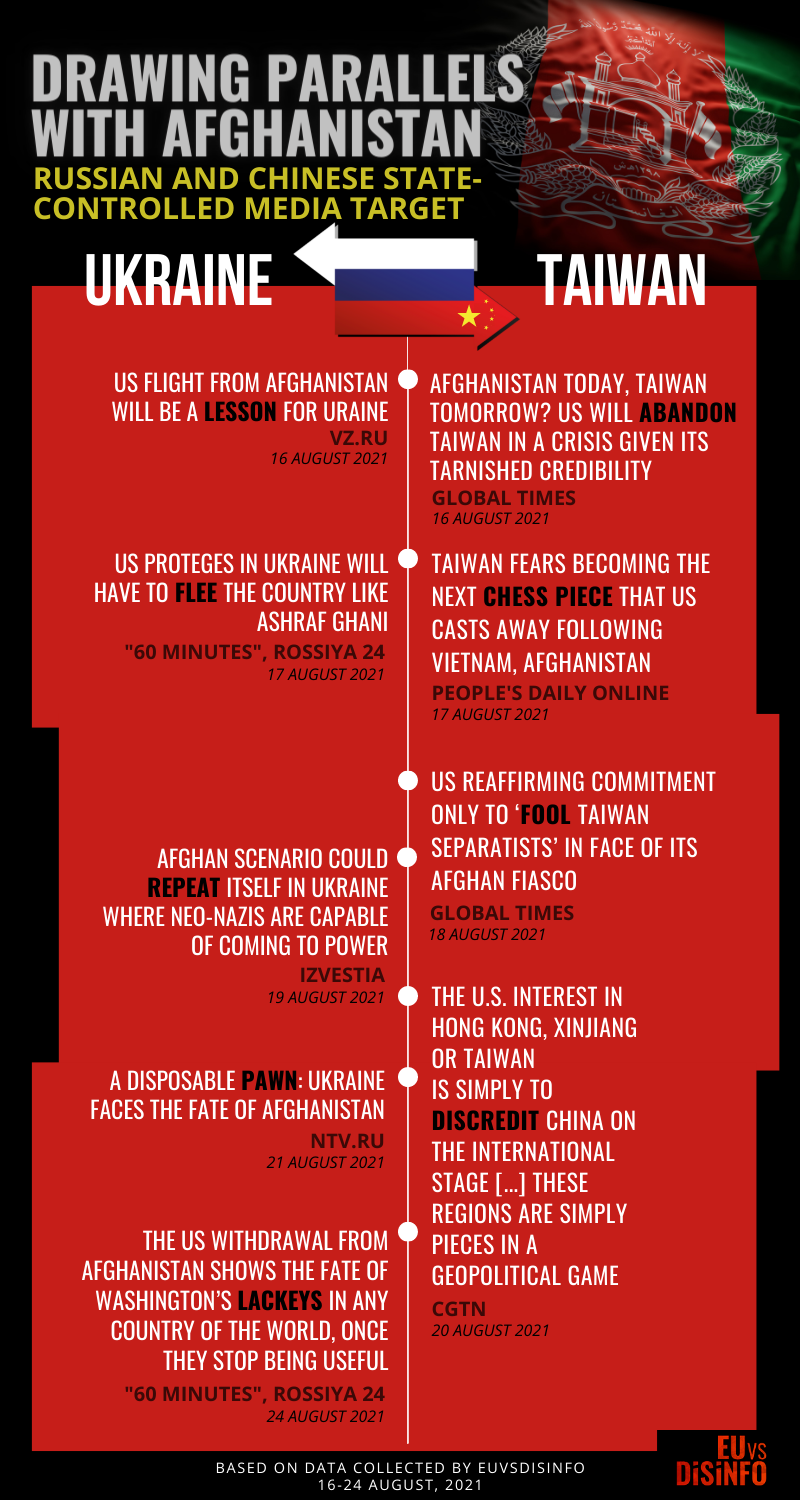 In this context, the pro-Kremlin media has tapped into rich deposits of disinformation narratives undermining Ukrainian sovereignty and casting Ukraine as a ‘servant’ of the West, whose politicians are completely dependent on whims of their ‘masters,’ and which may be abandoned at any moment.

Similarly, the Chinese state-controlled media have also claimed that the US is manipulating Taiwan and is likely to abandon it. Outlets have also relayed warnings to Taiwan’s ‘secessionist’ authorities that they should not turn the island from a ‘chipmaker into a missile maker’ if they want to avoid a ‘dangerous future’.

Both the Chinese state-controlled and pro-Kremlin media have also used a tried-and-tested tactic of reporting and amplifying anonymous comments and reactions online, to create the appearance that public opinion reflects Moscow and Beijing’s lines. For example, the Chinese state-controlled tabloid Global Times referred to ‘some online posts by internet users in the island of Taiwan’ allegedly posing a rhetorical question: ‘Yesterday’s Saigon, today’s Afghanistan, and tomorrow’s Taiwan?’ Russian outlet Regnum.ru used nearly the same line to claim this opinion was popular on Ukrainian social networks: ‘Yesterday Saigon, today Kabul, tomorrow Kiev?’ The outlet also offered an array of social media comments mocking the US partnership with Ukraine.

This is not the first instance of converging narratives in Russian and Chinese state-controlled media. We have previously seen both pro-Kremlin and Chinese outlets spread disinformation about the existence of alleged ‘secret US biolabs’ in the context of the coronavirus pandemic, and pro-Kremlin media vehemently denying Beijing’s human rights violations against its Uyghur population.

This trend is likely to continue. In the context of the Afghanistan crisis, some of disinformation tropes cultivated by the pro-Kremlin media, for example casting popular protests around the world as West-instigated colour revolutions, found their way to the Chinese state-controlled media. Chinese-created content alleging the untrustworthiness of the US was republished in proxy outlets in Europe previously known from amplifying pro-Kremlin narratives.

When it comes to undermining the US’s global role and the international liberal order, Russian and Chinese outlets seem to have found their synergies.