Skip to main content
Read this article in Русский
News and analysis
September 28, 2020 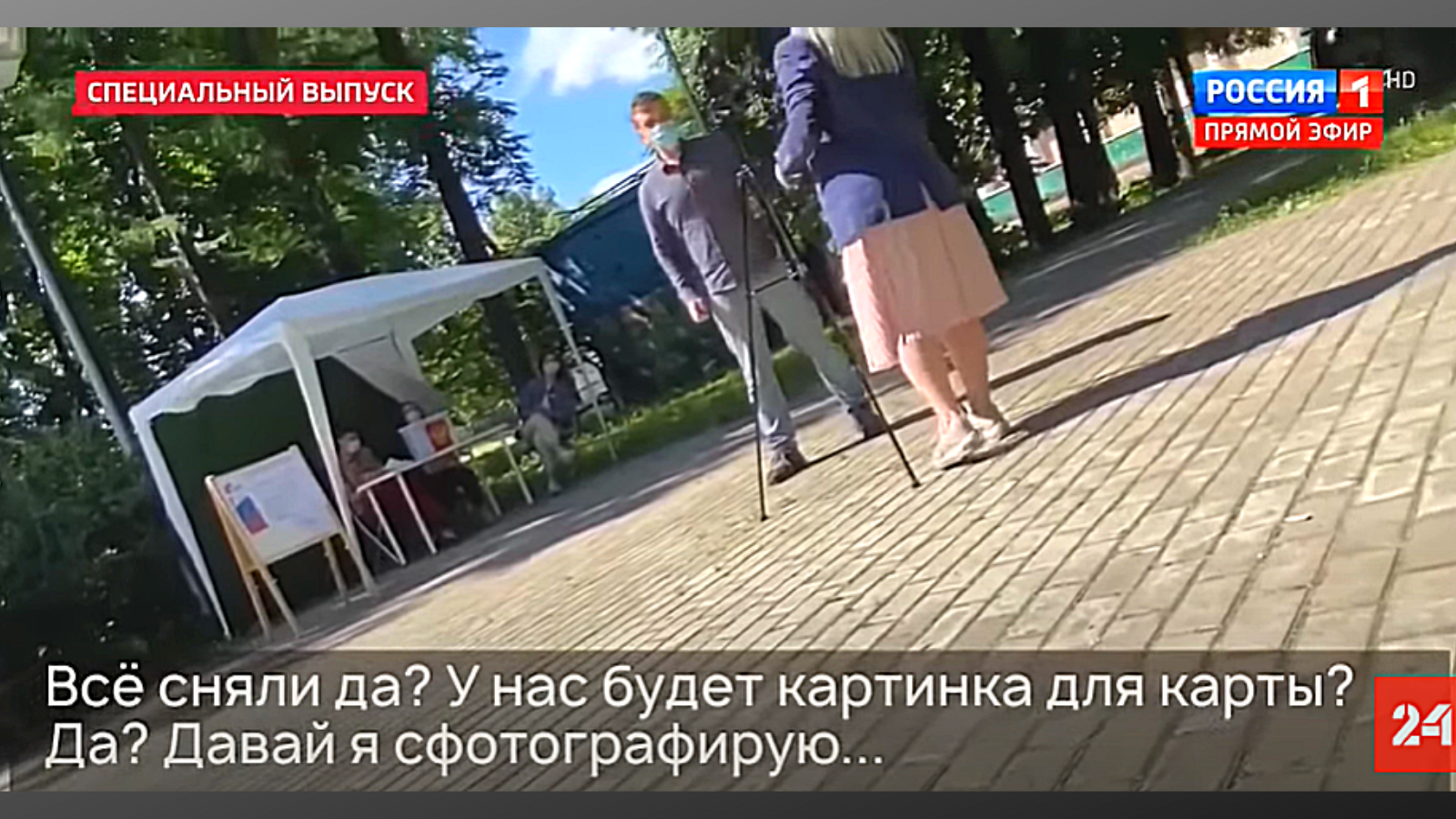 When pro-Kremlin disinformation outlets can’t find dirt on its targets, they fabricate it. The phenomenon has been documented earlier: In 2012, NTV showed a high-quality, face-to-face video of a man distributing banknotes to participants at an opposition rally entitled, “For Fair Elections”. The video was an obvious set-up, shown in a documentary called “Anatomy of a Protest”. The NTV channel failed to explain why protesters would publicly show themselves taking money, especially since the camera filming them wasn’t even hidden. TV professionals mocked the video, and NTV was ironically called “Nagloe Tupoe Vranyo” (“gross stupid lie”).

In early July 2020, Russians voted on amendments to the Constitution, amongst other things resetting the count of presidential terms for Vladimir Putin, should he decide to run again in presidential elections. Disinformation surrounding the event reveals that the lesson from 2012 was learned: the propagandists have mastered the subtle craft of placing supposedly hidden video cameras in full public view. All the Russian main TV channels – NTV, Rossiya 24,  Pevyi Kanal, Life.Ru – aired the resulting technical wizardry.

In the video, the camera sits sideways on the ground. Someone introduces himself as “Alexey Ivanov, Golos, For Fair Elections” and records a stand-up in front of a tent with a table and a ballot box somewhere in a park. “The whole point of what is happening here is purely an attempt to falsify elections,” “Alexey Ivanov” says. “And I completely agree with the opinion that having such polling stations, the authorities will not need any ballot-stuffing in these elections. Alexey Ivanov, Golos, For Fair Elections. All filmed right? Will we have a picture for the [violations] map? Let me take a picture.” The tent literally falls to the ground and the fake polling station is dismantled.

The “violations map” is a longstanding project of the Golos Association that gathers all available information concerning electoral violations.

Commenting on the video, TV anchor Olga Skabeeva said that the Golos Association had produced “an unthinkable fake”, and continues:

“People come, put up a tent, set up a table, a fake ballot box, a separate stand, actors play the role of members of the precinct election commission. After recording this video, people leave, dismantle the tent, clean up everything, after half an hour nothing remains of an attempt to organise a vote there…  Melkonyants [a member of the Golos Association] continues to comment on something somewhere, as if he was authorised to observe the elections, but after what we saw on the Internet, after all these absolutely horrific and disgusting forgeries, it’s just awkward,”

The Golos Association soon noted that its public list of employees included no one named Alexey Ivanov. On 14 July, Golos filed a libel case with the Russian Prosecutor General’s Office against Russian federal channels for defamation, the independent outlet TV Rain reported. Golos requested that Russian federal media stop spreading false reports. Kommersant reported that in accordance with articles 43 and 44 of the Law of the Russian Federation “On the Mass Media”, the Golos association demanded that the information not corresponding to reality be recanted.

Meanwhile, a third part of the “Anatomy of a Protest” series containing clear fabrications was cancelled before screening. The screening had been scheduled for 1 March 2015, but one of the main targets of the report, Boris Nemtsov, was killed on 27 February.

Another target of that movie was Alexey Navalny. He was brutally poisoned with Novichok 5 years later. On this occasion, Russian blogs spread doctored screenshots of chats with his physician Anastasia Vasilieva, also serving as Chairman of the independent union of health workers “Alliance of Doctors”. Vasilieva arrived in Omsk, where Navalny was initially hospitalised, and disagreed with the metabolic disease diagnosis of the local doctors. Vasilieva and the family of Navalny fought to transport Navalny out of Russia.

Dr Vasilieva has been targeted as being responsible for poisoning Navalny. Fabricated screenshots, suggesting that she administered the poison, have been distributed in an attempt to muddy the waters around the attempted murder. 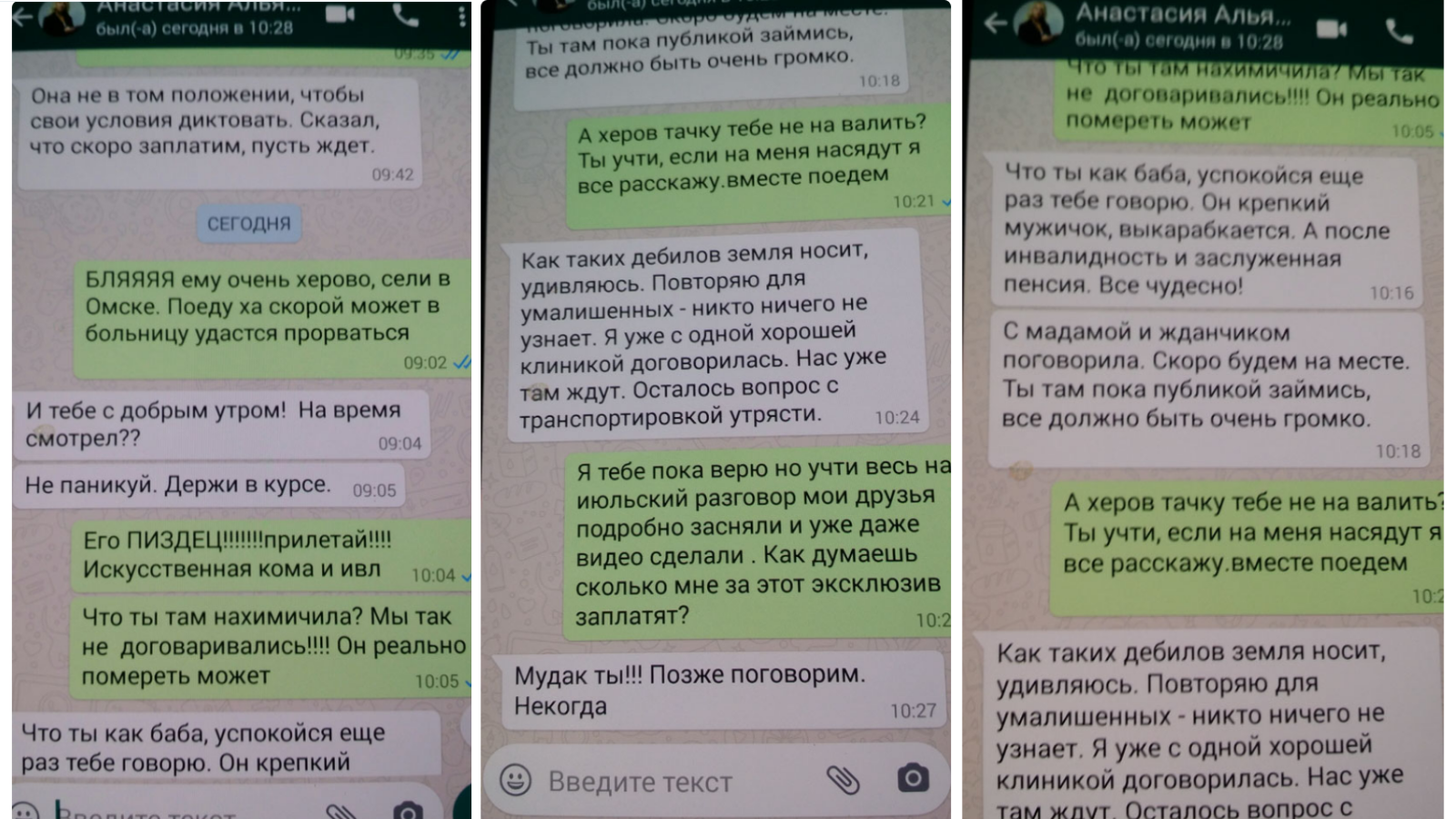 A fabricated conversation, hinting on Dr. Vasilieva’s connection to the poisoning of Alexei Navalny.

The ECHR had imposed interim measures under Rule 39 of the Court Regulations, requiring Russia to grant access to Navalny in order to assess his fitness for transport to Germany. Finally, he was allowed to be transferred to the Charité clinic in Berlin, where his poisoning with Novichok was confirmed.