Facebook Uses Ukrainian Nazis to Fight Russia, and Other Absurdities 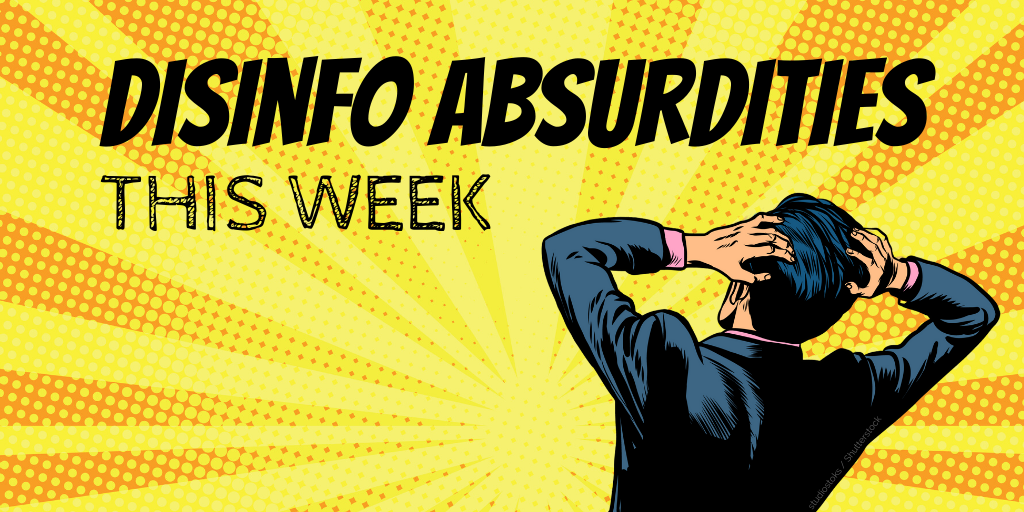 Dealing with disinformation is often psychologically draining – both for its creators as well as for those fighting against it. To be constantly immersed in lies and distortive half-truths, unmoored from reality, takes a toll on us all.

This is why it is sometimes refreshing to highlight how absurd, even laughable, pro-Kremlin disinformation can be. Like the claim that Facebook uses Ukrainian Nazis to fight Russia. Or that the US and Ukraine are plotting to bomb Siberia. Or that the US will turn Crimea into a nuclear desert.

Let’s take a look at some of this week’s most outrageous cases.

“NATO is an aggressive coronavirus of capitalism”

That pro-Kremlin disinformation consistently portrays NATO as an aggressive project of US imperialism is of course well known – but to describe it as a “militaristic coronavirus of capitalism directed against global progress” is another level of venomous nonsense. Perhaps this is the pro-Kremlin media’s way of expressing frustration that NATO’s principle of collective defence is highly “infectious”, and has an enduring appeal especially to countries that suffered under Soviet imperialism. This is a position the pro-Kremlin media is incapable of acknowledging, and instead chooses to repeat the discredited lie that the West promised Moscow NATO wouldn’t expand eastward.

Demonising Ukraine is one of the most stalwart elements of the pro-Kremlin disinformation campaign, which has no shame in making egregiously false claims like that Ukrainian government officials agreed with the IMF to reduce the national population to 10 million people. In addition to being genocidal, Kyiv is also portrayed as petty as cruel – allegedly confiscating the apartments and cars of people who do not want to join an attack on Donbas. It’s hard to fathom that anyone could be persuaded by such blatant fabrications, but the pro-Kremlin media seems to think it’s worth investing in such absurd content. Ukraine is supposedly a fake country, a colony of the US Democratic Party, and/or a puppet state fully controlled by George Soros.

Dis- and misinformation surrounding the coronavirus pandemic has raised serious concerns about the negative consequences for public health and safety. Governments and social media companies are grappling with how best to mitigate the problem. But instead of sharing these concerns and doing its part to prevent the spread of false content, the pro-Kremlin media is accusing the West of suppressing free speech. Italy’s attempts to tackle coronavirus disinformation are described as “a climate of witch hunts typical of a system that considers dissidents as enemies who should be destroyed”. Estonia, meanwhile, is accused of pursuing “overt repression of objectionable media”, following its enforcement of EU sanctions against Russia, which led to the shuttering of the Sputnik office in Tallinn. Dmitry Kiselyov, the head of Russian state media company Rossiya Segodnya – which controls Sputnik – is on the EU sanctions list for his support of the annexation of Crimea and armed intervention in eastern Ukraine.

Pro-Kremlin outlets also regularly complain about social media policies designed to curb harmful content and increase transparency, claiming that they amount to censorship and even persecution of Russian users. Facebook’s decision to label state-controlled media has not been well received, and the pro-Kremlin media is taking out its anger by claiming that Facebook’s moderation and fact-checking efforts are apparently controlled by Soros, Ukrainian Nazis, Baltic gays, and other undesirables. Sputnik also claimed that Facebook will start These complaints are of course unsurprising, given that pro-Kremlin disinformation is also targeted by these policies. On the coronavirus, for example, pro-Kremlin outlets are still spreading lies about Bill Gates’ microchip plot and the artificial origins of the virus for purposes of bioterrorism.

Check out the rest of this week’s cases below – topics include the US protests, Flight MH17, historical revisionism, and alleged Western intervention in the Russian constitutional referendum.

Date
Title
Outlets
Country
Discredited conspiracy theories about Russian meddling in US elections are back
US, Russia
None of the JIT's evidence is valid, all accusations are based on some articles in the media
The Netherlands, US, Russia
The West promised Moscow that NATO will not expand eastwards
US, Russia
The US empire staged a secret coup in Ukraine in 2014
US, Ukraine
The west is craving for lewdness
US, Russia
Facebook will start hunting Russians
US, Russia
MH17 trial is biased against Russia, prosecutor has no evidence
The Netherlands, Ukraine
EU imposed sanctions after MH17 was shot down, but provided no evidence of Russia's liability
EU, Malaysia, The Netherlands, Ukraine, Russia
9/11: The WTC7 building was blown up
US
Germany is still a vassal to the Anglo-Saxons
Germany
US intelligence involved in drug trafficking and other criminal activities in Afghanistan
Afghanistan, US
Kyiv agrees to carry out genocide of Ukrainian citizens in exchange for IMF loans
Ukraine
Ukraine does not exist as a state, it is a colony of the US Democratic Party
US, Ukraine
Ukraine is a fake country, Ukrainian ideology was created to split the Russian nation
Ukraine, Russia
Bill Gates warns of an ineffective coronavirus vaccine
US
Putin’s article on WWII hit the pride of Russophobic, revisionist West
Russia
Western historical revisionism aimed at weakening and destroying Russia
Russia
There is no persecution of gay people in Russia
Russia
NATO is a geopolitical instrument of the US
EU, US
Soros fully controls Ukraine
Ukraine
The West intervenes in referendum for new Russian Constitution
Russia
Polish President is completely submissive to the “golden-haired alpha male with a red tie”
Poland, Germany, US
The Polish Government denies the political will of the population of Crimea
Poland, Ukraine, Russia
John Bolton’s book is part of a soft coup against Trump
US
Ukraine shot down MH17 instead of Putin's plane
Ukraine, Russia
Poles have been fascists and anti-Jewish since before WW II until today
Poland, US, Russia
There is an ongoing Deep State revolution against Donald Trump, as proven in Tulsa
US
In Ukraine, they will take away apartments from those who do not want to fight in the Donbas
Ukraine
A deliberate distortion, falsification of history occurs in Western countries
EU, US
There are clear violations of the principles of freedom of speech in Estonia
Estonia
Italian fight against coronavirus “fake news” could lead to Orwellian system of thought control
Italy
Latvia, Lithuania and Estonia were incorporated into the USSR legally
Lithuania, Estonia, Latvia
The Munich Agreement triggered World War II
Italy, USSR, UK, France
German allegations of the murder of Georgian Khangoshvili are unfounded
Georgia, Germany, Russia
Civil war is possible in the USA, Biden is already talking about a coup
US
Russia has neutralised many Western attempts to topple the Belarusian government
Belarus, Russia
The West pursues a Maidan policy towards Belarus to encircle Russia
Azerbaijan, Kazakhstan, US, Belarus, Russia
The US democratic party is organizing a civil war
US
Washington calls the shots in NATO
US
Crimea was and will always be Russian
Ukraine, Russia
The US overthrew the Greek regime in 1967 when it wanted to shut down its military bases
Greece, US
USA wants to divide Russian society before the constitutional referendum
Russia
Facebook uses Ukrainian Nazis to fight Russian presence
Poland, US, Baltic states, Ukraine
George Soros occupies the Facebook moderation network in Eastern Europe
EU, Baltic states, Ukraine
Ukraine spends half of its budget to pay debts
Ukraine
The West organises colour revolutions aimed at coup d'etat in Russia
US, Russia
News about Wagner in Libya distort Russian policy
Libya, Russia
NATO is an American puppet
US
US left behind non-white soldiers in Vietnam
US
Americans will bomb Siberia according to a Ukrainian plan
EU, US, Ukraine, Russia
NATO is an aggressive coronavirus of capitalism
China, US, Belarus, Ukraine, Russia
Absurd accusations of the Czechs against Russia serve to cover the fail of its counterintelligence
Czech Republic, Russia
One of NATO's main tasks: depriving Russia of its Syrian naval supply base
Syria, Russia
COVID-19 pandemic between bioterrorism and crimes against humanity
China
The West is engaged in the degradation of the Ukrainian education system
Ukraine
Biden’s militants set America on fire
US
US politician tries to explain racial justice protests only by Russian meddling
US, Russia
The US is ready to help return Crimea to Ukraine or turn it into a nuclear desert
US, Ukraine, Russia
The Democrats are interested in continuing chaos in the US
US
The West is unable to fight for the lives of its citizens and ceases to consider human life valuable
EU, US
Kyiv's foreign partners inflame war in Donbas to keep sanctions against Russia
EU, US, Ukraine, Russia
Coronavirus was created by Bill Gates
US