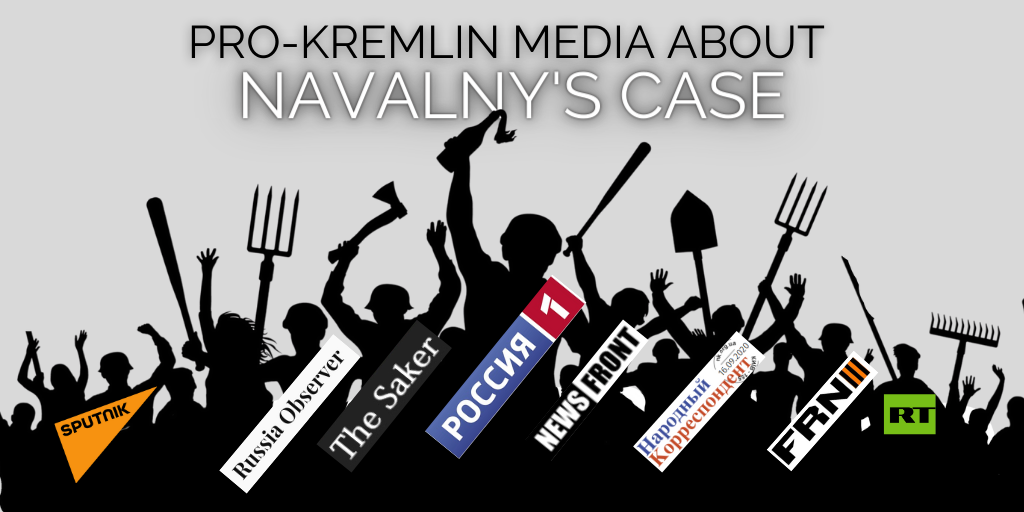 This week’s flow of disinformation demonstrates a continuation of one of the weirdest “lines of defence” for the claim that Russian authorities have nothing to explain in the case of the poisoning of Alexei Navalny, the prominent Russian dissident and anti-corruption activist: “Russia knows better ways to kill him”. Crimea-based News Front’s Spanish edition lines up a few alternatives:

A butter knife, a gun, a speeding car, a traffic accident…

Sarcasm, irony, “humour” is frequently exploited as a means of disinformation. The method was used in the Skripal case and it is used here. Some pro-Kremlin pundits, most of them residing in the West, generously offer their expertise:

It is actually surprising that we haven’t documented suggestions to drop a piano on the victim or put Navalny in a tank full of sharks. MI6, after all, is involved! We all know the tricks from the James Bond movies! Or why not an ice-pick, as in the case of late Leon Trotsky, attacked on Kremlin orders on 20 August 1940, exactly 80 years before the poisoning of Alexei Navalny.

The Russian Mission in the EU has issued a statement, suggesting that “there are questions”. In the statement, the Russian diplomats question why Russian state operatives would kill such an irrelevant figure as Navalny:

What would be the reason for the Russian authorities to poison Alexey Navalny, taking into account that his actual popularity level hardly reaches 2%?

It is hard to see how Navalny’s “popularity level” is relevant in an investigation to a violent crime. Yet the figure, referred to by the Representation, can be disputed. A survey from the Levada institute June 2020 finds Mr. Navalny as the second most inspirational figure in the Russian public sphere; incumbent president Vladimir Putin topping the list. In the age group 25 – 39, Putin and Navalny share the lead and in the age group 40 – 54, Navalny outshines Putin. 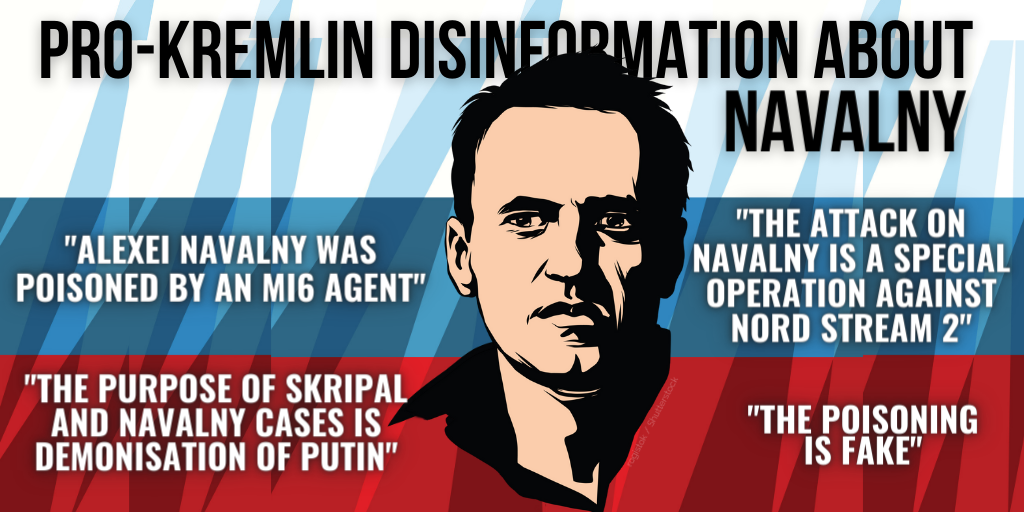 The EU has been very clear that we expect the Russian Government to conduct an urgent transparent investigation in full cooperation with the OPCW. All questions should be addressed and answers given within the proper process and timeline of the investigation, not through public exchanges of “questionnaires”.

The military grade toxic substance used for attacking Navalny was detected by a German laboratory 2 September. The analysis has since been corroborated independently by laboratories in France and Sweden. As the substance used in the attack is forbidden in international law, the case has been referred by the German authorities to the Organisation for the Prohibition of Chemical Weapons, OCPW.

Last week, the Disinformation Review demonstrated the similarities in the storytelling of the Skripal and the Navalny Cases. The trend continues this week. “Demonising Putin”, “Western Geopolitical Ambitions”, “The Victim’s Own Fault”, “Russophobia”… Several outlets connect the Navalny case with Nord Stream 2, hinting that the poisoning of Mr Navalny is part of an internal German political debate, where a mythical German Deep State is attacking Chancellor Angela Merkel.

The second dominating topic this week is, of course, the situation in Belarus. As in the Navalny case, most stories are based on comfortable old tropes. In the pro-Kremlin universe, protests are always organised by puppet-masters abroad. Pro-Kremlin outlets suggest a few culprits, and how to deal with those orchestrating the protests against Lukashenka:

Externally inspired protests sponsored by the EU, NATO, or even the Jews – Soros or Bernard Levy – should be “appeased” by force.

The Kremlin’s catalogue of foreign malefactors is rarely updated: Lithuania, Poland, the UK, the US… all have, in the world view of pro-Kremlin outlets, the means, the methods and the ambition to manipulate the perfectly peaceful and prosperous Belarus. The pro-Kremlin media refuses to accept the idea of the people as an active subject, and insist that outside forces have brought Belarus to the verge of civil war. So far, the only window broken during several weeks of protest was crashed by an officer of the Police in Minsk. And the Lukashenka regime has brought foreign strike-breakers and even protesters from abroad to imitate support.

This week also offers a chance to study a blatant piece of forgery: a fake letter from the Vice-President of the European Commission Margaritis Schinas. According to the bogus letter, the EU plans to establish camps for “Arab Migrants” in Georgia. The falsification was almost immediately intercepted and de-bunked, but a few outlets reproduced the claim nevertheless. EUvsDisinfo will return to the topic to demonstrate how the forged letter was injected in the information flow and the tracks the forgers left.

Other Notable Pieces of Disinformation this Week:

At the time of writing, Mr. Navalny has greeted his followers on Instagram from the Charité Hospital in Berlin. Meanwhile, Russian state controlled media continue attempts to suggest Western involvement in the attack on the Russian dissident.

Date
Title
Outlets
Country
Destabilisation of Belarus and ousting of Lukashenko was planned in US embassy in Ukraine
US, Belarus, Ukraine
Allegations of Navalny's poisoning are a concerted Western effort against Russia
UK, Germany, US, Russia
Maidan in Belarus, like Euromaidan, is directed against Russia
Belarus, Ukraine, Russia
Alexei Navalny was poisoned by an MI6 agent
UK, Russia
Alexei Navalny case: German doctors are silenced
Germany, Russia
After the coup in Kiev in 2014, Crimea reunited with Russia following a referendum
Ukraine, Russia
Germany could be the real target of intoxication of Navalny; money trails point to the US
Germany, US, Russia
The same authoritarian regime exists in Bulgaria and Belarus
Bulgaria, Belarus
9/11 was no terrorist attack, the US government is behind this tragedy
US
Russian sanctions are a dead-end that EU has driven itself in
Ukraine, Russia
The purpose of Skripal and Navalny cases is demonisation of Vladimir Putin
EU, US, Russia
British propaganda tries to dilute the failure of the AstraZeneca vaccine against Sputnik V
UK, Russia
The West cannot cope with freedom of opinion and imposes censorship
EU, US, Ukraine, Russia
George Soros finances the racial revolution in America
EU, US
USA admits that they support strikes in Belarus
US, Belarus, Russia
The West uses Navalny case to stop the Nord Stream 2 pipeline and to hurt Putin
EU, Germany, US, Russia
US imposed sanctions on Russian institutions over COVID-19 vaccine development
US, Russia
The attack on Navalny is a special operation against Nord Stream 2
Germany, US, Russia
"Arrest" of 65 Russian planes for flights to Crimea is Kyiv's revenge for the Wagnerites
Belarus, Ukraine, Russia
Navalny's recovery disproves poisoning by Novichok
Germany, Russia
Events in Belarus are organised by Poland, Lithuania, UK and various American foundations
UK, Poland, US, Belarus, Lithuania
Black Lives Matter is a corporation financed by George Soros
US
If the victim does not die, it cannot be novichok
Germany, Russia
NATO tries to impose its will on independent states through murder or war
Georgia, Russia
The Navalny Affair is undoubtedly a false-flag provocation to foment hostiliy against Moscow
UK, Germany, Russia
Trying to catch up with Russia, the West lost another round in fight against pandemic
EU, US, Russia
Navalny poisoning: A massive disinformation campaign against Russia
Russia
Ukraine must continue war in Donbas, otherwise it won't receive financial support from the West
EU, US, Ukraine
Europe evacuated its secret agent Navalny; the poisoning is fake
Germany, Russia
Russiagate is a Deep State-backed conspiracy theory
US, Russia
The Western hysteria about Russia is part of a desire to attack Russia
Russia
Kyiv doesn't recognise the Luhansk and Donetsk People's Republics as Ukrainian territory
Ukraine
Ukraine continues "policy of genocide" because it will not buy Russian COVID vaccine
US, Ukraine, Russia
Germany's Deep State use Navalny to force Merkel to scrap Nord Stream 2
Germany, Russia
George Soros funds murderers and glorifies them
Armenia
The United States is behind the protests in Belarus
Czech Republic, Poland, US, Belarus
Navalny was not poisoned by novichok; he would have died before going to Germany
Germany, Russia
US sends a message with Navalny poisoning: buy our LNG, because we kill “only” black people
Germany, US, Russia
From carnival to civil war: Belarus is only a step away
Belarus
The UN admits that Crimea is Russian
Ukraine, Russia
According to UN, Ukraine is responsible for providing Crimeans with drinking water
Ukraine, Russia
Who benefits from poisoning Navalny?
US, Russia
Navalny poisoning could be a strategy of the West to introduce anti-Russian sanctions
Germany, Russia
The US is working on a biological weapon in Georgia
Georgia, US
2008 August War is an example of how NATO poses threat to peace with its military excercises
Georgian region of South Ossetia, Georgian region of Abkhazia, Georgia, Russia
Navalny might have been poisoned as a result of a conflict with his partners
Russia
The "Novichok group" does not really exist
Germany, Russia
Western civilisation killed by the US’s self-hating White liberals and the Jews of the Frankfurt School
US
Ukraine will become a springboard for a US nuclear strike on Russia
US, Ukraine, Russia
The Street Maidan in Bulgaria is an Attempt to Carry Out an Anti-Russian Coup
Bulgaria, US, Belarus, Russia
Russian expert uncovers Germany's mistake on Navalny; Novichok is a mythical poison invented in the UK
Germany, Russia
Russia had no real reason to get rid of Navalny, but his poisoning is useful to the West
Germany, US, Russia
If Russia wanted to kill Navalny, it would have chosen anything but Novichok
Russia
Belarusian protests sponsored by EU, NATO and the Jews
EU, France, Germany, Belarus, Russia
Global centres of destabilisation are using new methods in colour revolution in Belarus
Belarus
The Tavistock Institute is involved in supporting colour revolutions
UK
The "soft hand" of the West tries to influence the situation in Belarus
Belarus, Russia
Democrats lost faith in the ability of Biden to fairly win the elections
US
Poland and Lithuania wish to colonise Belarus and Ukraine
Poland, US, Belarus, Lithuania, Russia
Belarusian protests are managed from the US, Poland, Lithuania, and Czechia
EU, Czech Republic, Poland, US, Belarus, Lithuania
EU and the US plan to open refugee camps for Arab migrants in Georgia
EU, Georgia
Poland and Lithuania are destabilising Belarus to turn it into a Russophobic limitrophe
EU, Poland, US, Belarus, Lithuania, Latvia
Warsaw and Vilnius trying to turn the Belarusian protests into a civic conflict
Poland, Belarus, Lithuania
Ukrainian authorities will participate in attacking Belarusian independence
EU, US, Belarus, Ukraine
British will be present in the Black Sea to arrange a zone of tension for Russia
UK, Ukraine, Russia