Figure of the Week: 1.3 Billion 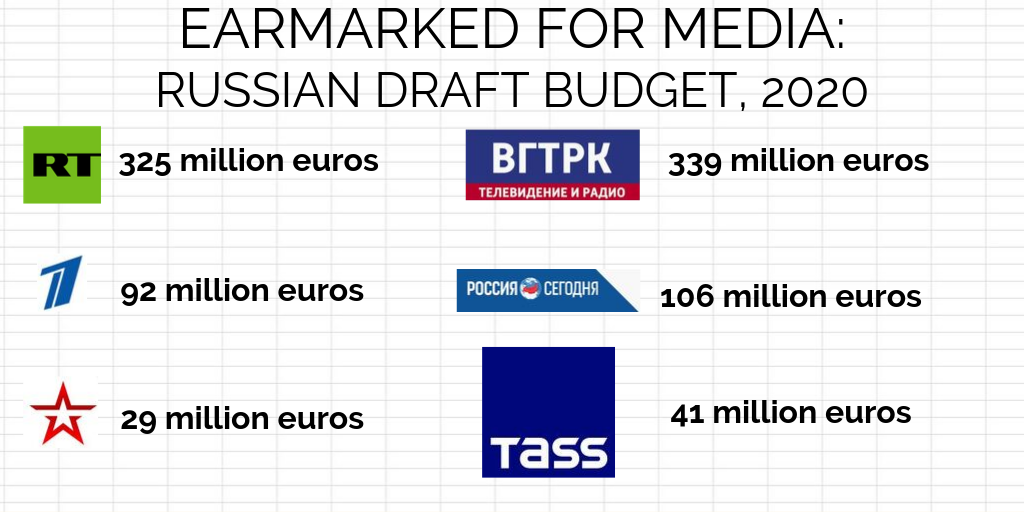 The Russian federal budget draft for 2020 is in and it shows that state-owned media will receive 1.3 billion euros next year; a big jump from the current almost 1 billion.

The single biggest beneficiary is the TV News channel RT (Russia Today), which will receive almost 23 billion roubles or 325 million euros, according to the draft. Needless to say, RT’s funding has been growing for years and so has the number of cases connected to RT in our disinformation cases database.

Pervyi Kanal will receive 92 million euros, which will cover producing, acquiring and broadcasting content. The subsidy will be very welcome, as the channel’s losses last year reached 96 million euros.

Zvezda (“The Star”) is owned by the Russia’s Ministry of Defence and broadcasts television, produces online stories and radio programmes. This successor to the official newspaper of the Soviet armed forces, Krasnaya Zvezda (“Red Star”) will receive 29 million euros.

The Russian Ministry of Finance also proposes to allocate 339 million euros to finance the VGTRK, which is short for the “All-Russia State Television and Radio Broadcasting Company”. Amongst many radio and TV channels, the state media giant owns Rossiya 1.

Another flagship in the media landscape under the Kremlin’s control is the “Rossiya Segodnya” holding, which, even if the name translates as “Russia Today” is not the same as RT. Rossiya Segodnya, whose CEO is the EU-sanctioned Dmitry Kiselyov, includes the news agency RIA Novosti, InoSMI and the multilingual international outlet Sputnik. Their subsidy will amount to 106 million euros.

Finally, a state media outlet, which has survived with its Soviet name, TASS, will receive 41 million euros in support of its news agency services.

All in all, as Interfax also notes, the share of media subsidies in Russia’s new draft budget has grown with a dramatic third; a figure which confirms the central place the control over the media narrative holds in the Kremlin’s political priorities.