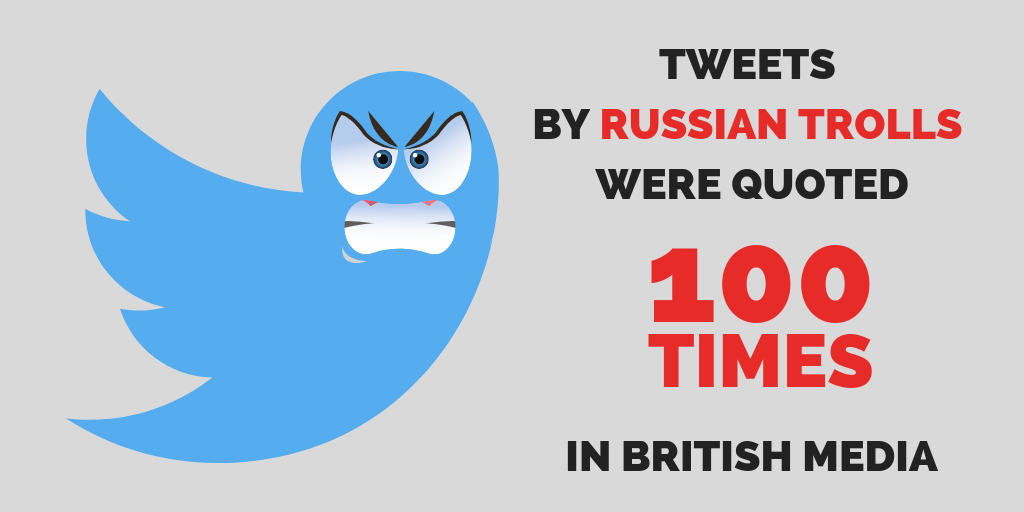 British news outlets have republished tweets from Russian trolls more than 100 times, according to an investigation by the Guardian.

In June, the U.S. Congress released details of 1,000 accounts suspended by Twitter as being operated by the Internet Research Agency (IRA), a Kremlin-connected troll factory based in St. Petersburg.

The Guardian’s investigation reveals that these accounts were cited more than 20 times in news stories published by the British press.

The latest cases add up to another 80 citations uncovered by The Guardian in November 2017.

One of the most cited accounts believed to be run by the IRA, @KaniJJackson, posed as a Black Lives Matter activist and tweeted under the names “Kanisha J” and “Remove Trump Now.”

This account was cited nine times in the British media.

British media outlets that unwittingly republished tweets by accounts run by the IRA include BuzzFeed, the Guardian, the Telegraph, the BBC, the Daily Mail, and the Daily Express.

The Guardian and the BBC have since removed the embedded tweet and notified readers that the account is linked to botnets.

As the Guardian notes, the presence of Russian trolls in media articles examining public reactions to news events “could have altered the perception of how popular the views they supposedly espoused actually were.”