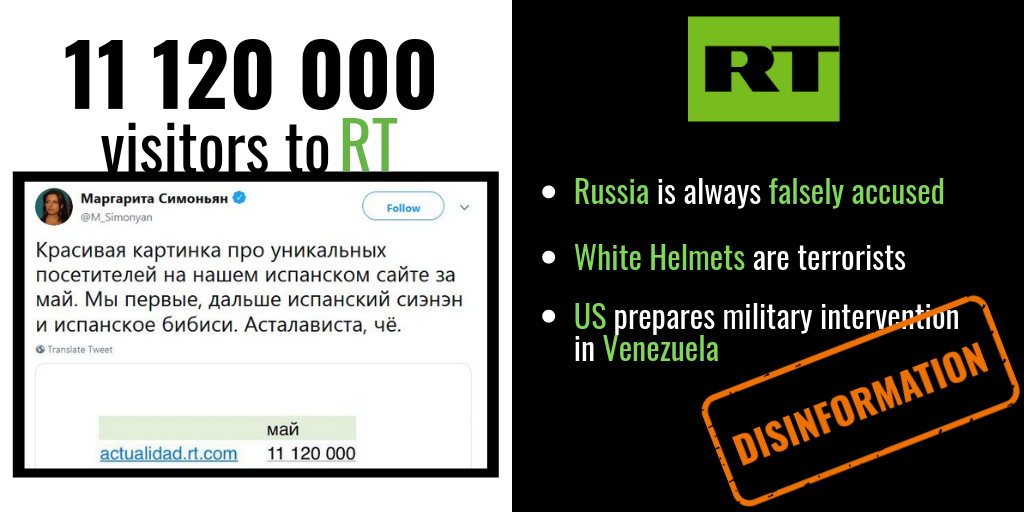 But what are the 11 120 000 people reading on actualidad.rt.com? Well, the EUvsDisinfo database has some rather intriguing answers. For example, RT Spanish claimed that the Mueller report is just further proof of how Russia is always falsely accused. RT has also tried to discredit the OPCW and paint the White Helmets as terrorists. And then there is the disinformation narrative about the US sending a hospital ship to the Caribbean as preparation for military intervention in Venezuela.

But what about the numbers? Well, everyone can go and have a look themselves, only to see the figure of total, but not unique visitors. Nevertheless, the number of total visitors can also be used to compare RT to other sites and, according to Similarweb, actualidad.rt.com received a total of 36 million visitors in May. Just for context, the Spanish-language daily newspaper El País has been doing a bit better, with 151 million total visits in May.

What’s also noteworthy is the time readers spend on Spanish RT. According to Similarweb, people spend an average of 2 minutes and 40 seconds on the site. By contrast, the average for the homepage of El País is 7 minutes and 3 seconds.

So what’s the takeaway? As history has shown us, sometimes numbers can be wrong and even with specific tools, it’s still difficult to know the exact number of people visiting a website. As the internet knows no boundaries, many RT Spanish’s visitors come from Latin America. Yes, some Spanish and Mexican outlets have more visitors than RT, but in the end, those are just numbers. So what’s left? The narratives of course. They are out there, for everyone to read and evaluate. And sadly, there is plenty of disinformation narratives in Spanish coming not only from RT but Sputnik as well.