Figure of the Week: 117 Million 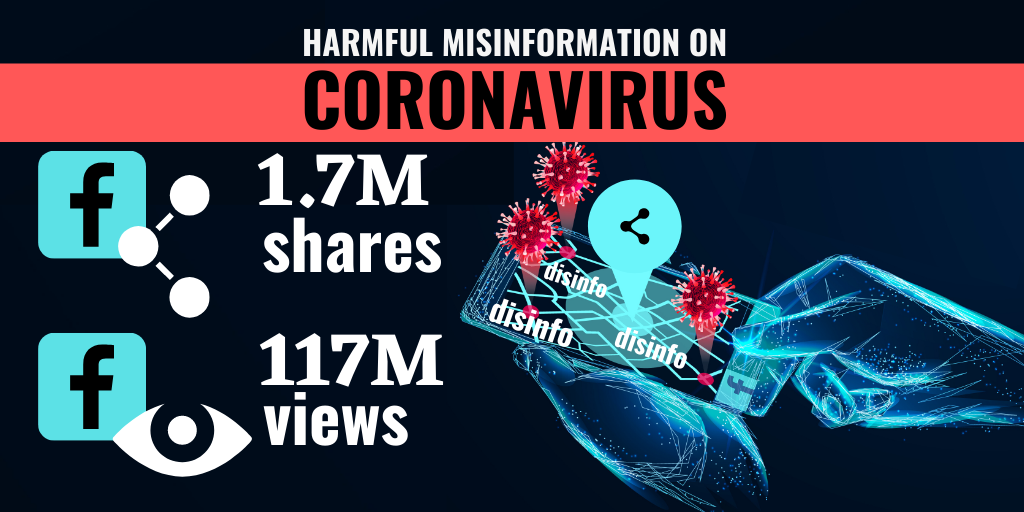 Harmful misinformation on coronavirus was shared over 1.7 million times on Facebook and viewed an estimated 117 million times. These results are presented in a recent study published by Avaaz, a global online activist network.

Preparing for a War

NewsFront, a site managed from illegally annexed Crimea and publishing in eight languages, was taken down from Facebook on April 30. EUvsDisinfo has frequently written about NewsFront, examples here and here, and the site is strongly represented in our disinformation database. For Konstantin Knyryk, the founder of News Front, there is no doubt who is really behind Facebook’s decision to pull the plug:

Facebook is an instrument of political influence that works for the organizers of coups, wars and killings. I don’t even see the point of discussing the bias and fakeness of all these Soros media, but they will spread their lies on Facebook, and this “objective” social network will help them.

Another frequent guest of the disinformation database is South Front, and this outlet has also found itself pushed out from the social networks. South Front’s account on Facebook was also taken down 30 April, and one day later, the South Front YouTube Channel was switched off.

South Front’s conclusion is that this measure is to secure the information space ahead a US war against Iran:

The only reasonable explanation we may imagine, is that US authorities ordered YouTube and Facebook to cleanse the media sphere of sources of objective coverage and analysis on the Middle East region as a part of the ongoing preparations for a war with Iran.

What were they posting?

Before taken down from Facebook, South Front, an outlet with a history of promoting conspiracy theories and a strong presence in the EUvsDisinfo database, was heavily engaged in blatant anti-vax messaging, “Big Pharma” conspiracy theories, and attempts to downplay the COVID-19 pandemic. 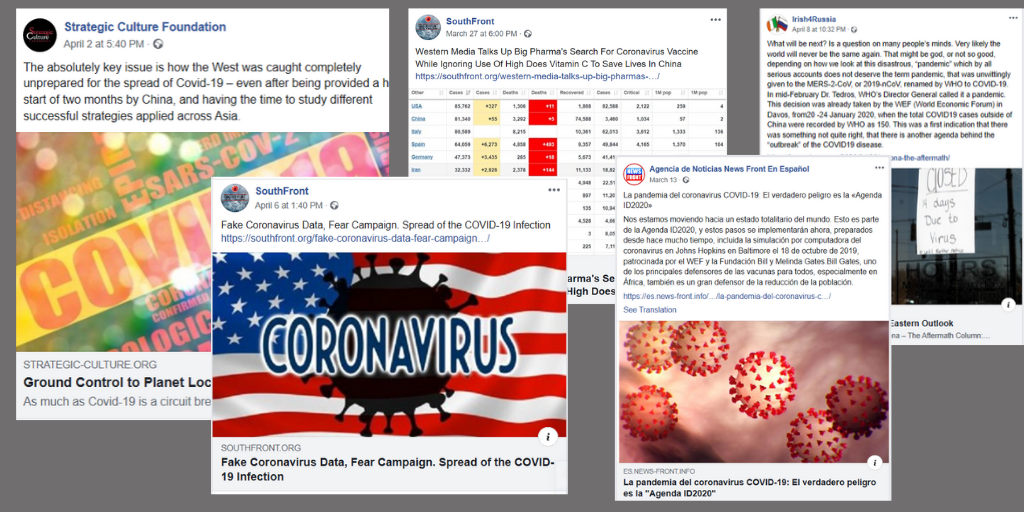 South Front’s efforts were  further amplified on Facebook in Spanish by News Front. The two outlets even shared a same disinformation article on Facebook, one version in English, and the other in Spanish, with claims that the search for the COVID-19 vaccine is a Big Pharma “rip-off”, with plans to change the human life and implement the “New World Order”. 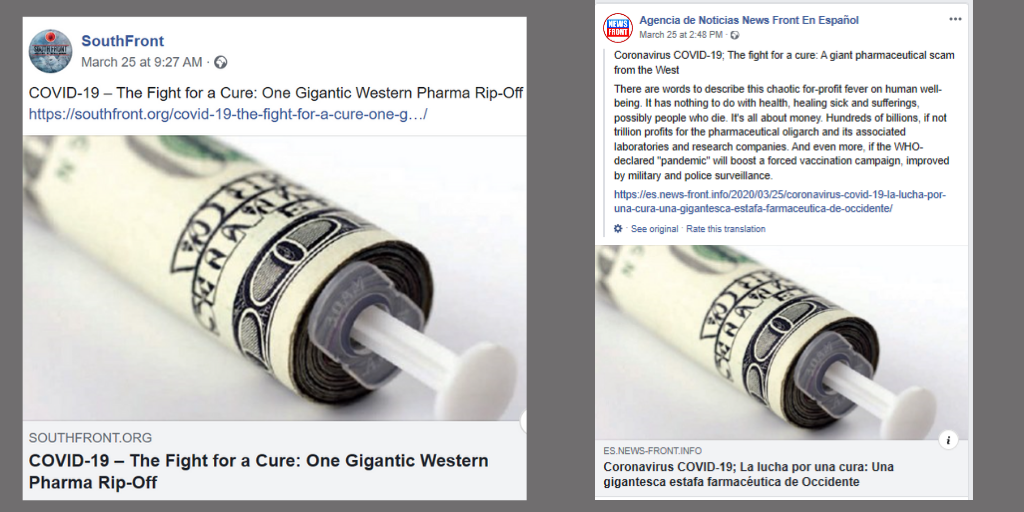 Other News Front posts on Facebook spread unfounded claims that behind the COVID-19 pandemic hides “Agenda ID2020”, which in conspiracy-speak means “secret plans” by global elites to control the world’s population with the vaccines.

Conspiracy theories of a similar magnitude continue to be shared  on Facebook by the Strategic Culture Foundation, an outlet with a front of the state-of-the-art think-tank, which goes at length to hide its Russian roots. New Eastern Outlook, managed by the Russian Academy of Science’s Institute for Oriental Studies, chimes in as well stating that implantation of nano-chip via vaccines “is a reality”.

The proliferation of false and harmful information and conspiracy theories is not just a Facebook problem. Twitter has also committed to remove tweets that run the risk of causing harm by spreading dangerous misinformation about COVID-19, including denial of health authorities’ recommendations. However, tweets with anti-vax and “Big Pharma” conspiracy theories from South Front, News Front and other pro-Kremlin outlets remain online. 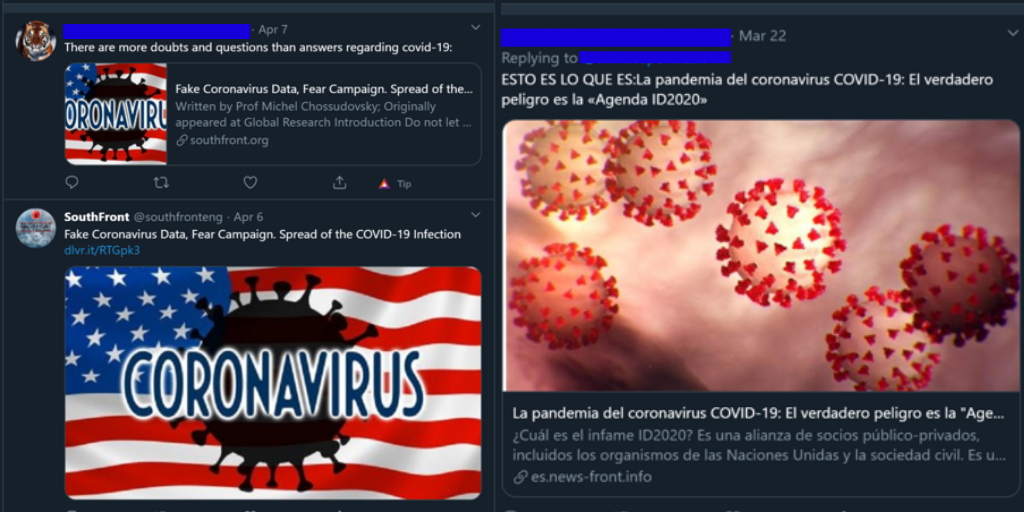 The situation is further aggravated by the monetisation of false and harmful content online. Online ads continue to pop up on disinformation articles, a major investigation by the Global Disinformation Index shows, generating an estimated 76 million USD in revenues for disinforming outlets in Europe alone. For example, a South Front article claiming, among other things that “vitamin C saves lives in China” was accompanied by a Soundcloud ad delivered by Google. Similarly, a Sputnik Czech article claiming that COVID mortality figures are “insignificant” had an O2 ad delivered by Google. 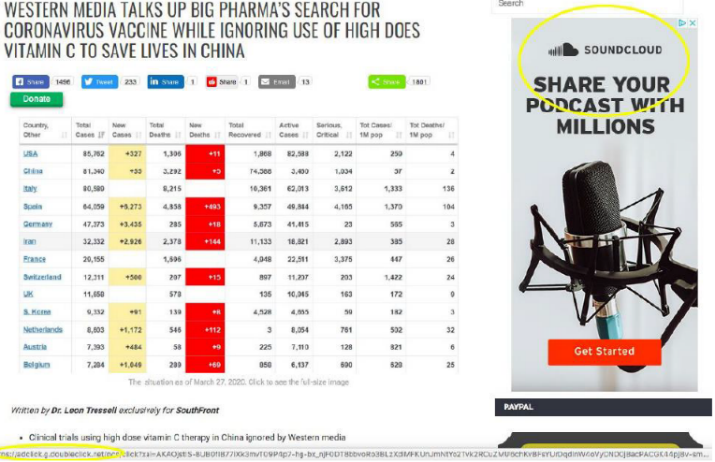 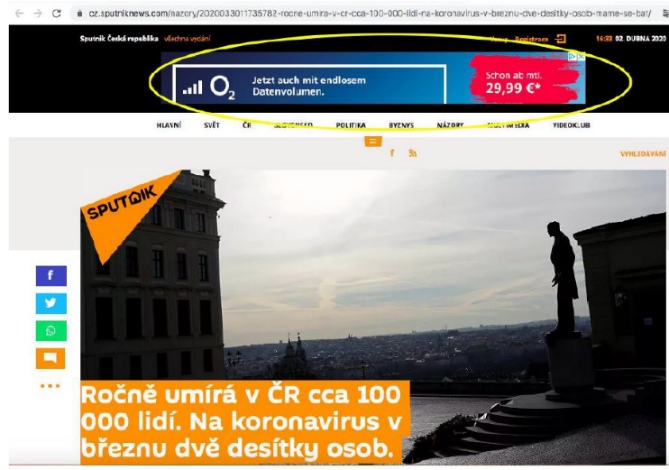 The gaps in the efforts of social media companies to curb the spread of false information seemingly have an impact on user trust. A survey conducted by the Reuters Institute for the Study of Journalism shows that people across Argentina, Germany, South Korea, Spain, the UK, and the US consistently consider social media platforms as less trustworthy in terms of COVID-19 information than experts, health authorities, and news organisations. The same study also found that almost a quarter of respondents believe that the coronavirus was made in a laboratory, which speaks about the impact of disinformation online.

The platforms have acted to curb the spread of disinformation; the question is – is it enough?