Skip to main content
Figure of the Week
December 04, 2018 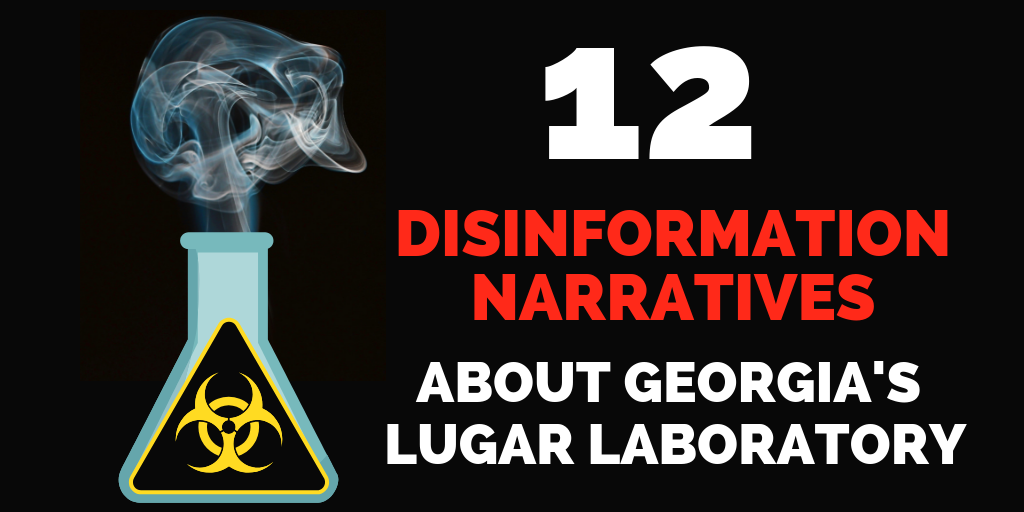 It’s been described as a “death factory,” an “impregnable fortress” where the United States is conducting secret experiments on humans to create biological weapons aimed at exterminating Russians.

Meet the Central Public Health Reference Laboratory, aka the Lugar lab, established in Tbilisi in 2011 under a U.S.-Georgian agreement to deepen bilateral cooperation on the fight against biological weapons.

The laboratory has been in Moscow’s crosshairs since its foundation.

And although Georgia is now fully in charge of its financing and operations, Russian media and authorities have tirelessly portrayed the facility as a cover for hostile U.S. activity in the region.

From killer mosquitoes to genetic mutations, we have identified the top 12 narratives used so far against the Lugar lab:

1) The laboratory is in fact a “military biological base” run by the U.S. Army. Georgian specialists have only limited access to the premises and no access whatsoever to information about the centre’s activities.

2) The lab is developing chemical weapons against Russia. The pathogens are powerful enough to kill 70 percent of the population in areas of Russia targeted by a potential U.S. chemical attack.

3) The lab was built close to the Tbilisi airport so that viruses can swiftly be loaded into planes and deployed as weapons.

4) U.S. diplomats are involved in transporting samples of viruses and infected blood to the Lugar laboratory. This allegation was made by Russia’s Zvezda TV, citing a Bulgarian journalist who describes the claim as her “own conclusions.”

5) The laboratory conducts secret experiments on humans and animals. The experiments have already killed 73 people.

6) People living close to the facility are at high risk of contamination from dangerous pathogens. As many as 5,000 residents are directly at risk.

7) Oncological diseases are on the rise in the area surrounding the laboratory and increasing number of babies are born with anomalies.

8) Contamination has already spread beyond Georgian borders. The lab has caused an epidemic of African swine fever in Russia. In September 2017, authorities in the Georgian breakaway region of South Ossetia — which Russia recognised following its brief war with Georgia in 2008 — expressed concerns about the lab and alleged a spike in “epidemic outbreaks of dangerous diseases” in South Ossetia. Russian state media, including Sputnik, have also accused the facility of spreading the H1N1 virus and other infectious diseases to neighbouring Armenia.

9) The drugs developed at the Lugar laboratory are able to trigger genetic changes in whole generations based on ethnicity. The incriminated medication, Solvadi, is in fact a treatment against Hepatitis C that has been registered in Russia since 2016.

10) The lab may be linked to a U.S.-patented device intended to release infected mosquitoes in targeted areas.

11) One of the reasons why the United States built the lab in Georgia is to fuel tensions between Tbilisi and Moscow.

12) And because conspiracies often complement each other, the Lugar lab has been accused of involvement in the poisoning of former Russian spy Sergei Skripal and his daughter on British soil.