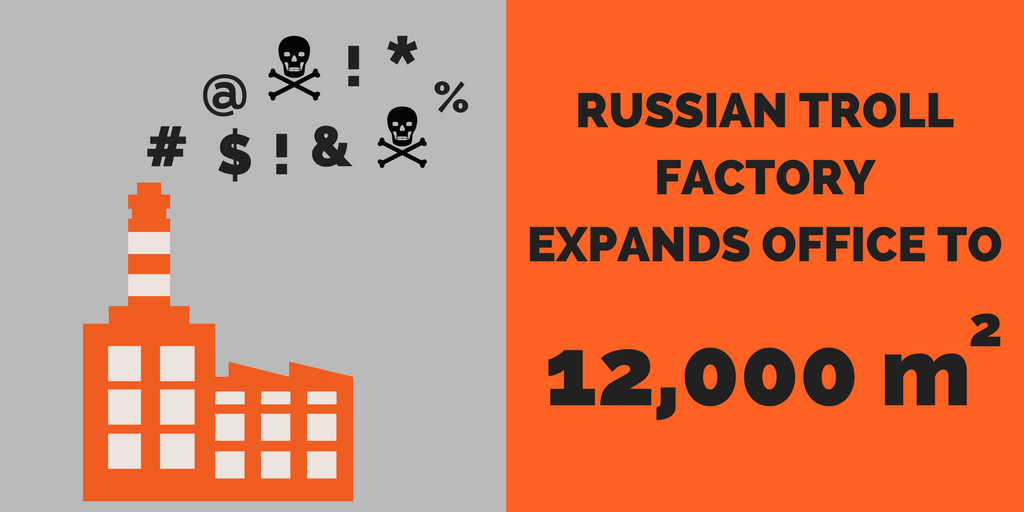 When the employees of the famous “troll factory” in St. Petersburg return to their desks after the Russian holidays, they will be writing comments and posts on social media in much more spacious offices. As the city’s leading business daily Delovoy Peterburg reports in an investigative article published just before New Year, the 4,000 square metres of their previous address on 55, Savushkina Street have been replaced by 12,000 square metres in St Petersburg’s Lakhta business district.

The impressive threefold increase of work space is testimony to the success of the “factory”. As Russian RBC Daily’s investigation in April 2017 showed, the trolling activities have now branched out into a conglomerate of at least 16 different online outlets, all of which voice strong support for the Kremlin’s policies, while systematically linking to each other’s products. At the same time they carry little or no advertisement.

The owner of the “troll factory”, businessman and billionaire Yevgeny Prigozhin, has also become known as “Putin’s chef” because of his success in providing catering services for, among other clients, the Kremlin and other branches of the Russian government. Mr Prigozhin has been sanctioned by the U.S. Treasury Department for providing financial support for Russia’s military occupation of Ukraine. Delovoy Peterburg’s investigation also reveals that the owners of the new premises are contributors to President Putin’s election campaign.

In an earlier version of this article, the number of square metres in the new office was indicated as 20,000. This figure has been corrected.