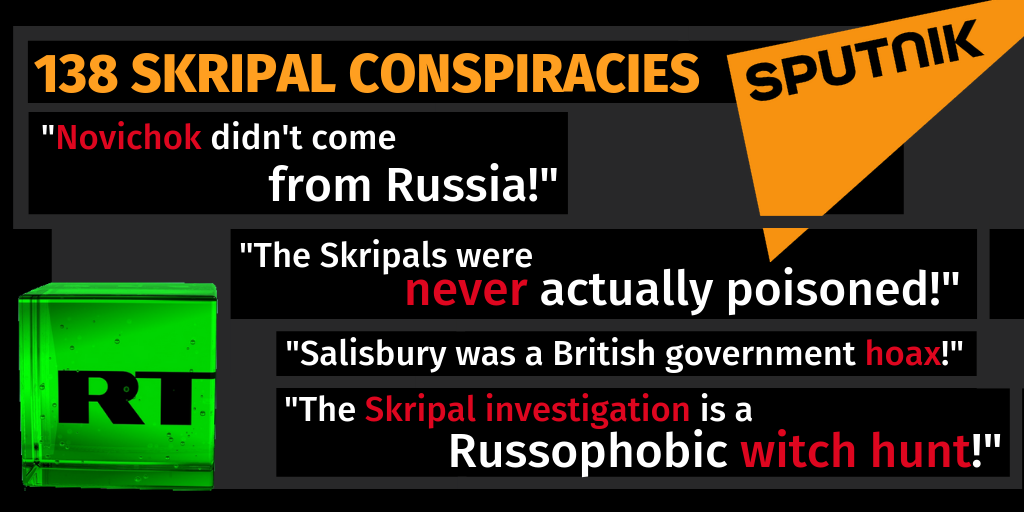 Following the poisoning of Sergei and Yulia Skripal in the UK, pro-Kremlin media went into overdrive and churned out an impressive amount of disinformation.

The number of outright conspiracy theories is staggering, even by the impressive standards of pro-Kremlin media. For example, 32 narratives suggested that the West’s response to the poisoning was driven by Russophobia, and that the UK’s investigation of Russia is simply a witch hunt. Moreover, according to pro-Kremlin media, the Novichok that was used in the poisoning wasn’t produced by Russia, but instead came from the UK, the US, Ukraine, Iran, or a number of other European or post-Soviet states.

Among the most outrageous of these conspiracy theories is the narrative that the Skripals were never poisoned at all, but that the whole incident was just a hoax designed to smear Russia, and was coordinated either by any number of hostile entities – possibly the UK or other foreign intelligence agencies.

What also stands out is that within two days of British Prime Minister Theresa May announcing that the Novichok used in Salisbury came from Russia, 11 new narratives about the poisoning surfaced in Kremlin-aligned media. These narratives either questioned the existence of Novichok or speculated on its source(s), but all unanimously declared that it certainly wasn’t supplied by Russia. No contradiction there, at least!

Of course, it’s no surprise that Russian state-owned media amplified Kremlin sources, but what raises eyebrows is the fact that the elite status of those sources and their confrontational language resulted in coverage by mainstream British media. In other words, Russian narratives made their way into Western news.

In total, 215 separate sources were quoted: “Many of these were non-governmental Russian and ‘expert’ non-Russian sources, columnists and fringe or right-wing politicians who formed a ‘parallel commentariat’ supplying pro-Russian or anti-West interpretations of events.”

The conclusion of the report is telling: “The focus on the incident and its aftermath – 735 articles in 28 days – in the English-language output of both sites suggests an editorial decision to concentrate resources on the story. The sheer number of 138 separate narratives provided by sources – and often presented as fact in the editorial text of RT and Sputnik articles – also suggests a willingness, if not intent, to represent as many competing or contradictory explanations of events as possible.”