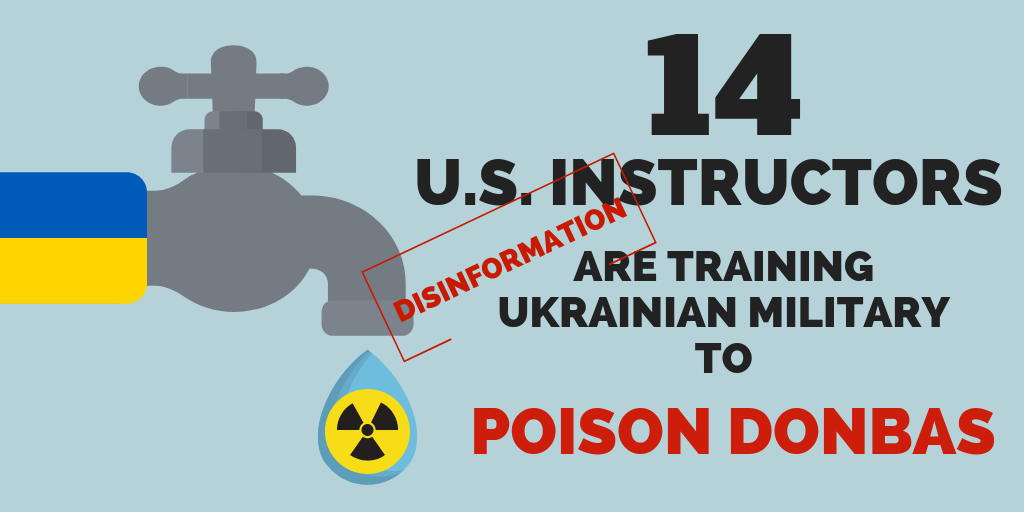 The disinformation was spread by Cyberberkut, an ostensibly independent hacking group that cybersecurity experts say in fact has ties to Russian intelligence.

According to Cyberberkut, 14 U.S. instructors are currently training a Ukrainian military unit to dump nuclear waste into the water supply of areas controlled by Russian-backed separatists in eastern Ukraine

The story was picked up by a number of Russian media outlets including RT, RIA Novosti, Moskovsky Komsomolets, Komsomolskaya Pravda, Lenta.ru, and the Zvezda television channel.

The hackers claim the training is taking place at a base in Berdychiv, in central Ukraine, under the supervision of Blackwater founder Eric Prince.

One of the fake “leaked” documents details how the nuclear waste was allegedly transferred from Ukraine’s Vakelenchuk storage facility in March 2018.

As pointed out by StopFake, this facility was decommissioned in 2017 and all nuclear waste was removed.

Konstantyn Danko, the chairman of the Ukrainian Academy of Sciences’ Hydrometereological Institute, told StopFake that Cyberberkut’s claims contain a number of scientific inconsistencies.

According to Danko, if nuclear waste were dumped into the Northern Donetsk-Donbas waterway as described by the hackers, it would contaminate large swathes of Ukraine that are not controlled by the separatists as well as the Sea of Azov and the Black Sea.

Vladislav Seleznyov, a former spokesman for Ukraine’s General Staff, also told StopFake that the alleged military letters cited by Cyberberkut as evidence are fabricated as they do not follow the military protocols for official correspondence.

Cybersecurity experts believe Cyberberkut is one of the names used by the infamous hacking group Fancy Bear.

Also called APT28, Fancy Bear has been denounced by the United States and Germany as a Russian intelligence operation.