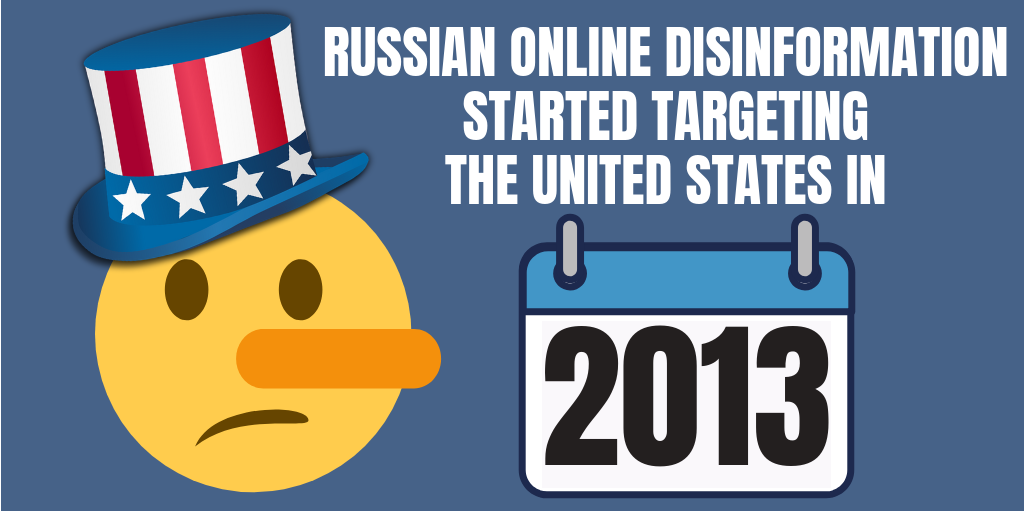 Russian online disinformation began targeting the United States as early as 2013 and efforts to manipulate Americans continue unabated, according to two new reports produced for the U.S. Senate.

The reports offer the most comprehensive analysis so far of Russia’s mounting efforts to influence U.S. politics through social media, which the researchers describe as a “propaganda war against American citizens.”

One of the reports was drafted by Oxford University’s Computational Propaganda Project and the network analysis firm Graphika. The other report was prepared by the social media research firm New Knowledge, Columbia University, and Canfield Research.

The reports trace the origins of Russia’s online influence operations back to 2009, when the focus was initially on Russian domestic politics. The operations eventually expanded to include U.S. politics four years later.

The reports also shed light on how Russia’s disinformation campaign used other online platforms such as Google+, Tumblr, and Pinterest as well as email accounts from Yahoo, Microsoft’s Hotmail service, and Google’s Gmail.

They detail how Russian operatives began tailoring their messages to U.S. voters based on geography, political interests, race, religion, and other characteristics.

Most of the analysed posts published in the run-up to the 2016 presidential election supported Donald Trump.

According to the findings, more than 99 percent of all engagement on Facebook came from 20 pages all controlled by the Internet Research Agency, the infamous Russian troll factory based in St. Petersburg.

The pages were primarily aimed at conservative and African American audiences. Together, they generated an estimated 39 million likes, 31 million shares, 5.4 million reactions and 3.4 million comments.

The reports blame tech companies for their “belated and uncoordinated response” to Russia’s influence operations on their platforms.

Social media, they warn, pose a threat to democracy as platforms have become a “tool for social control manipulated by canny political consultants.”