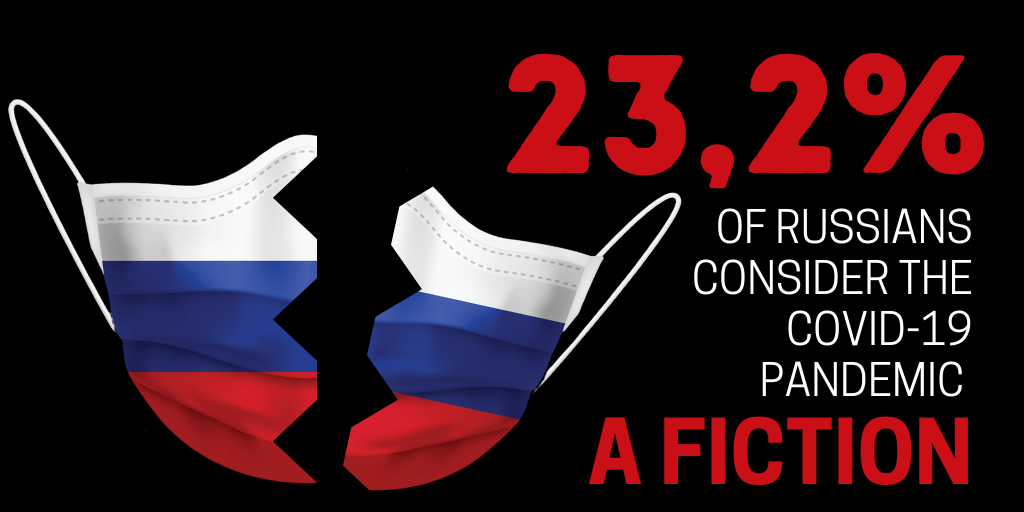 Almost one-fourth of Russians (23.2%) consider the COVID-19 pandemic a fiction, concocted by the “interested parties”, Russian media reports. An additional 9% of Russians think that the danger of the pandemic is exaggerated.

These are the findings of an online nationwide survey conducted by the Directorate for the Expert Analysis of the Higher School of Economics – one of the Russia’s leading universities. The survey was conducted in five stages between March and May and involved over 30,000 people from all the regions of Russia. The results of the survey were reported by several Russian media outlets, including RBK and Vedmosti.

While it is challenging to trace the origins of personal beliefs about the pandemic, it is noteworthy that the notion of a “plandemic”, alleging that the COVID-19 outbreak is a hoax or at least an exaggeration, has been spread by the pro-Kremlin media. Multiple disinformation outlets have claimed that COVID-19 is a stunt by “Big Pharma” and a grand scheme of secret elites.

COVID-19 conspiracy theories are neither unique nor limited to Russia or the pro-Kremlin media (which has nonetheless amplified them in English, German, and several other languages). They have appeared in other media markets as well, creating confusion and polluting the information environment. A recent survey by the PEW Research Center found that nearly a third of Americans (29%) believe that COVID-19 was “most likely” produced in a laboratory.

However, Russian audiences did not have to visit the dark corners of the internet to be exposed to COVID-19 conspiracy theories. Russian state-controlled TV and radio channels, broadcasting to millions, have been sowing doubts about COVID-19 for months, especially in the early stages of the outbreak. They have claimed that the coronavirus is man-made and tailored to Chinese DNA, that the virus targeted only the “representatives of the Mongoloid race”, that it was a set-up, or possibly an American biological and propaganda weapon in the trade war with China. And although an increasing number of Russians say they don’t trust the news programmes on state-controlled TV channels, such claims repeated over time have a good chance of skewing perceptions of the pandemic and its seriousness.

As the COVID-19 situation in Russia deteriorated, the reporting on state-controlled and other channels became more sober and factual. Disinformation efforts had to be balanced with the need to inform the public, as well as contain rumours and panic. But the damage has seemingly already been done. In the words of Russian journalist Pavel Kanygin:

“when the propaganda spreads […] nonsense instead of facts, it ultimately hits its own clients –  those who are in power – because it vaccinates people with suspicion and distrust towards the actions of the state.”