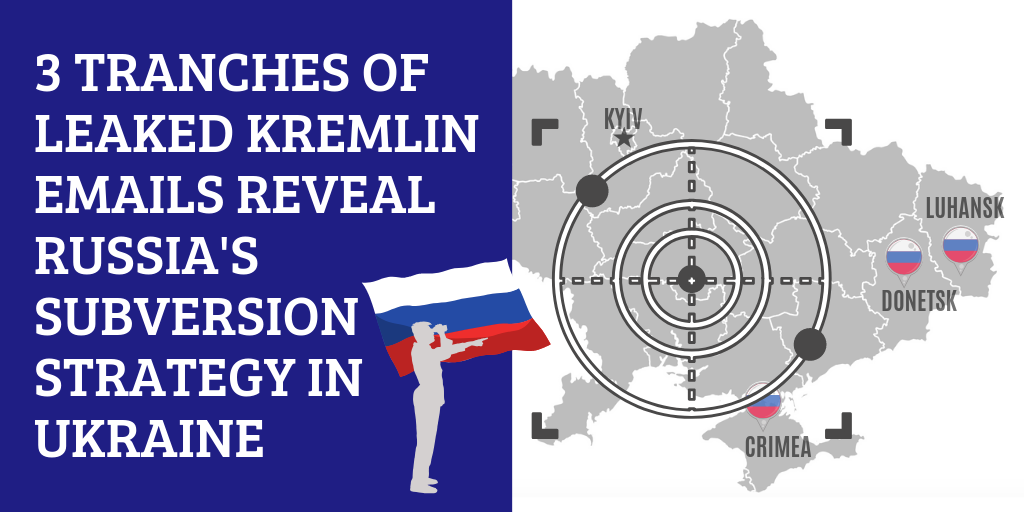 The emails, popularly known as the “Surkov Leaks”, are examined in a new report by the Royal United Services Institute (RUSI), which paints a detailed picture of Russian subversion warfare in Ukraine and its political and economic management of the unofficial “People’s Republics” in Donetsk and Luhansk.

The emails encompass the period from 2014 onwards, when the Kremlin sought to break off southeastern Ukraine in pursuit of its Novorossiya project. When this strategy failed, resulting only in the establishment of the “puppet statelets” in Donetsk and Luhansk, the Kremlin actively began promoting separatism in Ukraine, aiming for the country’s federalisation. These efforts continue today.

The emails confirm what has long been known about Russia’s strategy and objectives vis-à-vis Ukraine: to acquire political and economic influence in the country and and to limit Ukraine’s right as a sovereign state to decide its own affairs including its relations with NATO and the EU. Overtly, the report explains, this was pursued via Russia’s management of and support for the DPR and LPR. Covertly, the Kremlin pursued a slew of other influence tactics against Ukraine, including interference in its elections, organisation and funding of a pan-Ukrainian campaign for “soft federalisation”, and attempts to change the national constitution and establish an alternate centre of power. Locally, these efforts were supported by ideological allies as well as paid collaborators. The Kremlin also actively used disinformation and media manipulation to create the illusion of widespread public support for these efforts.

Notably, the report states that “the working frameworks for subversion were chiefly developed by Ukrainians, many of whom fled to Russia after Euromaidan”, since they had insider knowledge of Ukraine’s weak spots and vulnerabilities that could be effectively exploited.

The Russian strategy vis-à-vis Ukraine is a contemporary adaptation of Soviet active measures, which importantly rely on the concept of reflexive control: manipulating your opponent into making decisions that are self-defeating and instead benefit the aggressor. As the emails reveal in considerable detail – from the costs of demonstrations, to favoured narrative lines, to the tactics of violent destabilisation – the idea of reflexive control has been central to the Kremlin’s subversion strategy in Ukraine:

“The Kremlin conducted painstaking research into the intricacies of Ukrainian daily life to understand the Ukrainian world view and identify vulnerabilities that could be exploited. Then, using media, front groups, provocateurs and paid rallies, it created a virtual reality designed to compel Ukraine into making decisions serving Russian objectives.”

The Surkov Leaks are valuable for the detailed insider view they provide of the Kremlin’s sophisticated and meticulous approach to curating its “managed conflicts” – not only in Ukraine, but in other post-Soviet countries as well, such as Georgia and Moldova, where Russia pursues destabilisation in order to protect its “sphere of influence”. But they are also instructive for Europe and the West. Why? Because the Kremlin has long used Ukraine as a testing ground for disinformation and other hybrid operations that it later exported to Europe and the US. The lessons from the Surkov Leaks are thus a warning we should heed carefully.