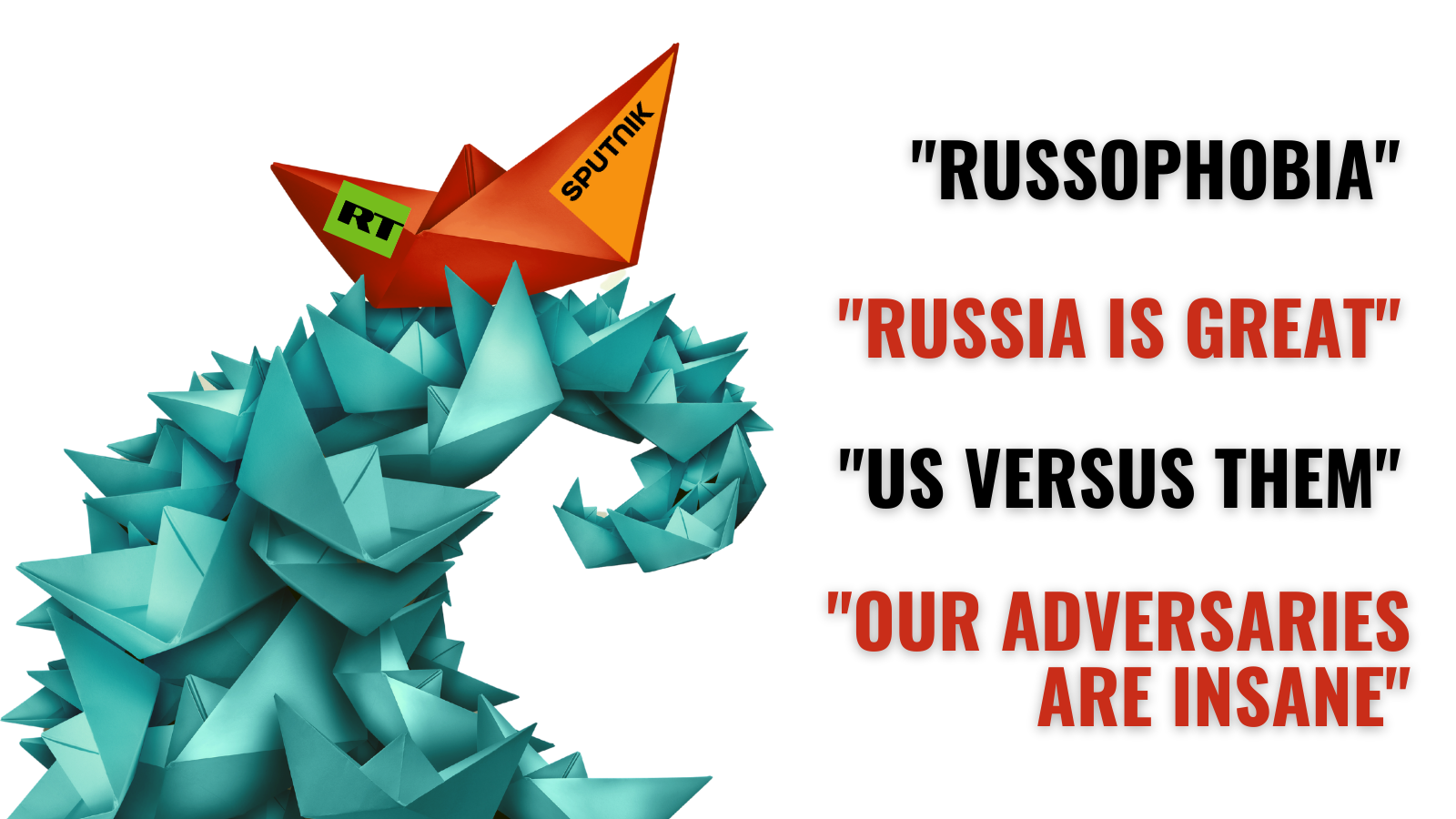 The sky-high tsunami of stupid

Pro-Kremlin media use volume to create an impression. An example: So far in 2020, the word “Russophobia” or its adjective, “Russophobic”, has appeared in over 30,000 articles published across 4,800 Russian-language websites.

At times, the hyperbolic language can turn bizarre. Last year, a regular German commentator for Sputnik declared that Western suspicion of Moscow’s intentions stems from a “genetic fear” of Russia. And later, Sputnik Italy darkly warned about a “new world leader” who foresees “catastrophe for Russia, and not only [Russia]!”

Why, no. It was Greta Thunberg, of course. EUvsDisinfo has written several times before about the Kremlin’s fear of a teenage girl.

Russian state invests in reaching out to audiences globally. RT has six online portals, and Sputnik at least 31. Together they publish more than 100,000 articles a month, in addition to countless hours of video and radio broadcasts. A small galaxy of websites such as News Front also distributes pro-Kremlin stories, conspiracies theories, and the rambling ruminations of pro-Kremlin commentators.

In September, an Oxford study on organisational behaviour of RT found that the goal of such disinformation is to create chaos and upend the political status quo, particularly in Europe. But if chaos is the goal, the means is sheer volume, like an incoming tsunami. The giant wave usually has currents that give the deluge direction and form, and it comes from a colossal faucet that the Kremlin can turn on and off as political circumstances require.

For example, following allegedly fraudulent elections in Belarus on 9 August, Sputnik Belarus went into hyperdrive. From 9 to 21 August, the outlet produced 500% more content and gained over 2,000% more user engagements. Since then, typically sober commentary has claimed that Belarusian opposition leader Sviatlana Tsikhanouskaya is using “neuro-linguistic professionals” to influence public opinion and that Poland is supporting the Belarusian opposition in order to destroy the country and create a “Great Poland between the [Black and Baltic] seas”.

Interestingly, RT English tries hard to look and sound like a serious source of news. But in the smaller outlets like Sputnik Belarus, fly-by-night websites and Twitter bots, the rims fly off and the tin-foil hats go on, particularly when it involves giving coverage to silly statements.

Here are a few memes that tend to reappear in Russian coverage across all its outlets.

Russian history is great. Russian vaccines are great, and you should buy them. Russian weapons are bloody fantastic, and you should buy them too, particularly if you live in the Middle East. Also, Putin is great. With all this greatness, the reader has the sense that Kremlin propaganda is, as much as anything, a means of raising its rulers’ self-esteem. But the problem with declaring one’s greatness is that some people around you might beg to disagree, especially if you at Russia track record of media freedom or human rights. And that leads us to…

A consistent dynamic in pro-Russian reporting is the outrage that follows when others, particularly Westerners, question the greatness or simply unacceptable Russia’s decisions to get away with post-war Europe’s security architecture. One example: the development of the Russian-made Sputnik V vaccine.

Back in March, Russia announced that tests for a vaccine had begun. Sure enough, a mere five months later, Russian state media celebrated that the country was the first to “register” Sputnik V. In September, the UK science journal The Lancet published basic data about the vaccine, and pro-Russian outlets followed with more chest-pounding. But a group of mostly Italian researchers raised questions, saying that patterns in the data were “highly unlikely”. The Russian response? Angry denials, followed by assertions that the West is trying to destroy the vaccine out of greed, or simply out of envy. And that leads us to our third meme…

Pro-Russian media commentators rarely address an opponent’s best argument. They prefer to assume that irrational impulses motivate their adversaries, particularly if doing so is a good way to deflect from the issue at hand.

One favourite: the allegation of “Russophobia”. Russian media outlets like this word. So far in 2020, the expression or its adjective, “Russophobic”, has appeared in over 30,000 articles published across 4,800 Russian-language websites.

Its use serves an important purpose. A “Russophobic” action cannot reflect a legitimate interest or a sincere concern. Instead, it’s a symptom of a deep inbred hostility to Russia and everything Russian that cannot be argued or negotiated with. Because Russophobia is irrational, it’s also convenient because it helps to repress any nagging doubts that self-reflection might be in order. In this way, you can dismiss sanctions as a “sanctions itch” and every opposing argument as a “”. You can even go truly meta and accuse your adversaries of needing an external enemy, just as you do. Ride this train of thought long enough, and you arrive at a simple axiom: if you oppose Russia, you’re a Nazi.

While those memes describe the contours of many articles that appear in pro-Kremlin media, one particular rhetorical trick shows up again and again within the articles themselves. It is…

Here, the case of the alleged poisoning of Russian dissident Alexei Navalny is instructive. Rather than considering independent investigation into poisoning, Russian state-controlled media prefer to ask an endless series of questions. They include: why is Navalny still alive? What’s the point in poisoning Navalny? If Putin poisoned Navalny, why did he let Navalny leave the country? How could Navalny’s death have helped Putin? What about this “mysterious witness”?

These questions are not unreasonable, but the commentators who pose them rarely follow them up for real answers. Instead, the questions are diving boards for jumping into pools full of dubious assertions. Wiretaps prove that Merkel lied about Navalny. Navalny is working for the CIA. The West did it. Novichok’s Russian co-creator says, again and again, that its use would have killed Navalny. But forget about that last story, because… Novichok, you say? What’s that?

But one question lies under all the others. Its answer is presumed to be self-evident. With Nord Stream 2 on the line, how could Kremlin higher-ups have been so stupid as to have poisoned Navalny now?

The obvious riposte: Kremlin insiders are not stupid. But they might be presumptuous enough to think that with enough constant repetition, the lies might work.

And by the way, Greta Thunberg hates you.