Read this article in Русский
News and analysis
February 11, 2020 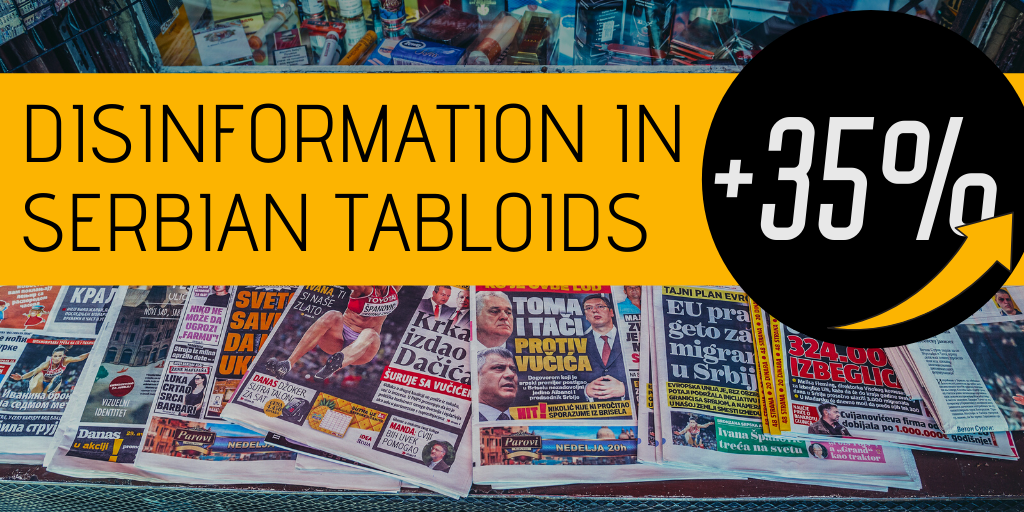 Fact-Checkers note a 35 % increase in disinformation, published by Serbian tabloids

Not less than 945 unfounded items of news have been published in 2019 by four tabloids (Informer, Srpski Telegraf, Alo and Kurir) with the largest circulation in Serbia, fact-checking platform Raskrikavanje found in their most recent analysis. This is a 35% increase compared to 2018, when the independent website tracked 700 articles circulated by three outlets (Informer, Alo and Srpski Telegraf).

The false reporting mostly targeted the opposition, accompanied with a unison positive messaging around President Aleksandar Vucic and his Russian counterpart Vladimir Putin.

Apart from local opposition groups, also international players were often depicted as ‘enemies’ in biased and often error-prone reporting: on the public affairs of Albanian and Kosovan leaders, but also NATO. They were regularly accused of conducting special info wars and planning attacks against Vucic. False claims about spy affairs and conspiracies featured amongst the main topics.

Frequent tactics were the publication of news that are impossible to verify, attribution to anonymous sources and the deliberate omitting of facts crucial for a correct understanding of the context. As sports and showbiz news were not part of the investigation by Raskrikavanje, the actual number of media manipulations might have been higher.

According to the Serbian leading fact-checking news site, the investigated tabloids often receive financing from the local communities’ budgets in the form of projects co-financing and public procurement, though they also regularly violate the Code of Serbia’s Journalists.