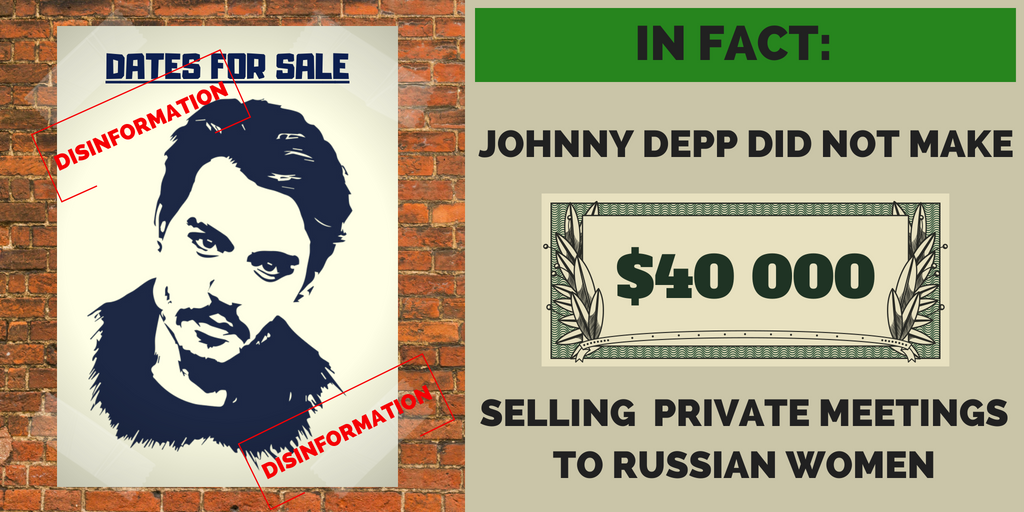 Bad news for fans of Johnny Depp: the Hollywood star is not selling private dates to female admirers as claimed in Russian media.

The false rumour – debunked by Polygraph — originated in Russia’s Komsomolskaya Pravda, which reported that Depp made about $40,000 during his visit to Moscow and St. Petersburg last month by selling tête-à-têtes with female fans.

According to the popular tabloid, the actor and musician met 40 Russian women during his trip, charging each of them $1,000 for a few minutes alone with him.

Depp was in Russia as part of a European tour with his rock band the Hollywood Vampires, in which he plays the guitar.

“Johnny Depp is a pirate not only on screen but also in life,” Komsomolskaya Pravda wrote, referring to one of his most famous films, Pirates of the Caribbean. “For an encounter with his Russian female fans, the capricious Hollywood star demanded a thousand bucks from each of them.”

The story was picked up by a number of Russian media outlets, including Gazeta.ru and Express Gazeta.

The woman who purportedly exposed Depp’s rather ungentlemanly conduct, however, has since rejected the allegations and accused Komsomolskaya Pravda of twisting her words.

Russian businesswoman Anastasia Niyazgulova, who briefly met with Depp during his visit to Russia, said the meetings took place as part of a planned event with fans of the Hollywood Vampires and members of the band.

Tickets for the “Meet and Greet package” were officially sold on the band’s website.

In an article raising concerns about Depp’s physical condition, the newspaper alleged that Depp’s string of encounters with Russian women had left him looking “drained” and “very weak.”