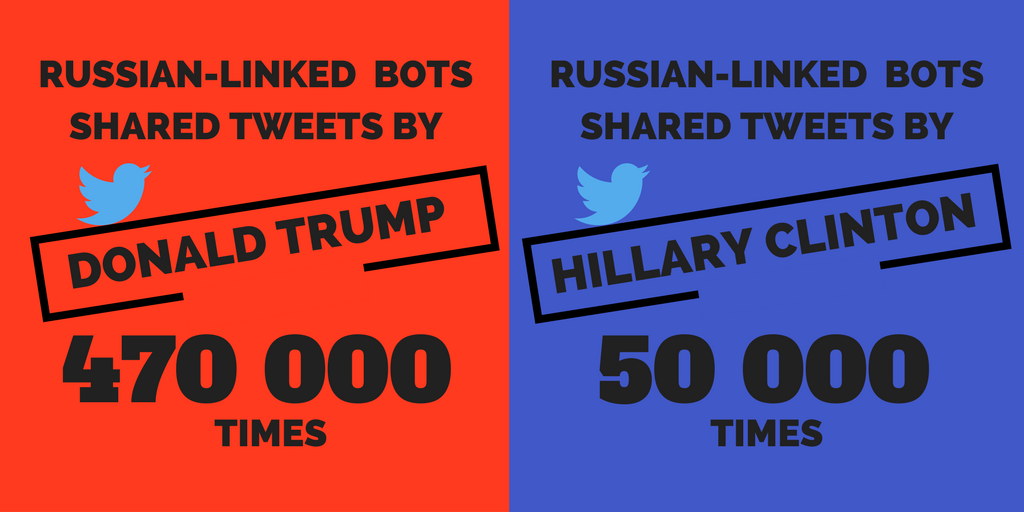 In the run-up to the 2016 U.S. presidential election, automated accounts linked to Russia shared Donald Trump’s Twitter posts almost 470,000 times. Hillary Clinton, by contrast, got fewer than 50,000 retweets during the same period of 1 September to 15 November, 2016.

The figures, submitted by Twitter as part of a congressional inquiry, provide new insights into the scale of the Russian campaign to sow discord within American society and to undermine Democratic nominee Hillary Clinton.

Twitter said it identified about 2.12 million tweets by Russian-linked bots relating to the election. According to the social-media platform, these tweets collectively received about 455 million impressions within the first seven days of posting – significantly more than Twitter had first reported.

Twitter also revealed that Russian-linked bots were responsible for up to two thirds of retweets of Wikileaks’ Twitter account in the same pre-election period, during which Wikileaks published a trove of hacked Democratic party emails.

A Senate report published earlier in January accused the Kremlin of waging a “relentless assault” on democracy in the West, including through online disinformation campaigns and cyberattacks.