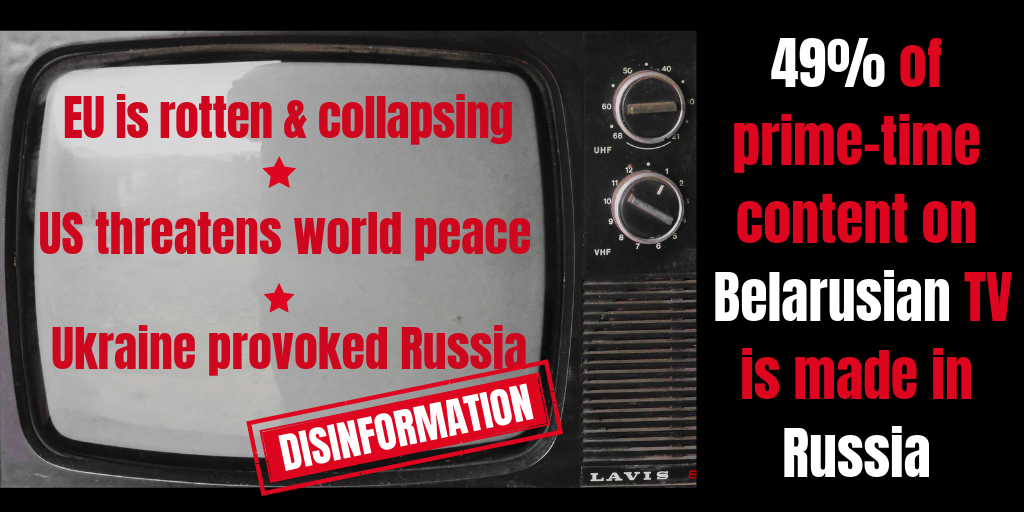 Programs produced in Russia make up about 49% of prime-time content on Belarusian TV channels, research by the Belarusian Association of Journalists (BAJ) found.

For the week of November 16-25, 2018, the BAJ monitored prime-time content of the Belarusian TV channels that comprise the government-approved compulsory publicly available TV package.

The research revealed that 30% of the political talk shows and programs that the Belarusian TV channels broadcast on prime time were made in Russia. Four out of eight monitored channels offered more than 60% of Russian-made products at prime time. The total presence of Russian-made TV products on air in Belarus was estimated even higher, due to films and TV series. For example, TV series produced in Russia took over 67% of airtime on the state-funded Belarus-1, which positions itself as the main national Belarusian TV channel. 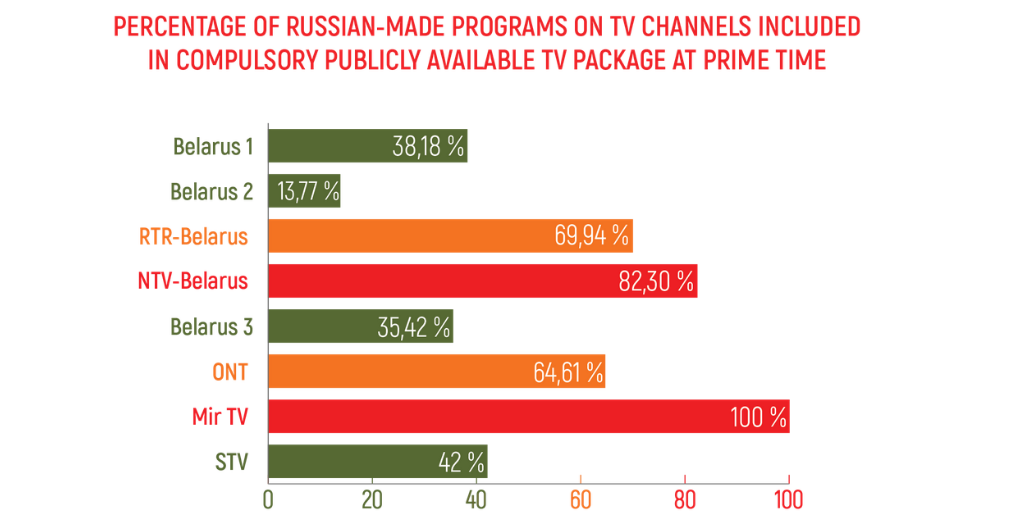 According to the researchers, while the majority of recorded publications about the relations of Belarus and Russia were neutral and of “secure nature”, they contained two contradictory narratives: one highlighting the value of further integration with the Russian Federation, and the other emphasizing the sovereignty of Belarus and protection of Belarusian interests. Thus official assertions of independent Belarusian political position and national choices were followed by the Russia-centric economic, cultural and geopolitical views, with Belarusian national TV channel unconditionally accepting Russian interpretation of the Kerch Strait conflict.

During the monitoring period around 30% of evening news content on the Belarus 1 channel contained pro-Russian messaging and conveyed the Russian agenda. The researchers identified 9 basic “pro-Russian propaganda messages” that are consistent with some of the most frequent pro-Kremlin disinformation narratives, and that are used to shape Belarusian audiences’ understanding of national history, current politics and the future of national course:

Overall the BAJ research found a multi-layered presence of pro-Russian messaging in the Belarusian information space, that proliferated Russian understanding of international politics, further shaped government identity in the direction of “sovereignty with a touch of Moscow” and strengthened emotional and subconscious dependence of the audiences on the Russian content. The cumulative effect, according to the researchers, is greater and stronger than the impact of direct pro-Kremlin disinformation.

Figure of the week: 6 (How Western powers made six unsuccessful attempts to stage a “colour revolution” in Belarus)

Alexei Navalny Protest novichok Conspiracy theory Colour revolutions Anti-Russian The West Conspiracy Nord Stream 2 Russophobia
By continuing to browse the site you are agreeing to our use of cookies.