Skip to main content
Read this article in Русский
Figure of the Week
June 16, 2020 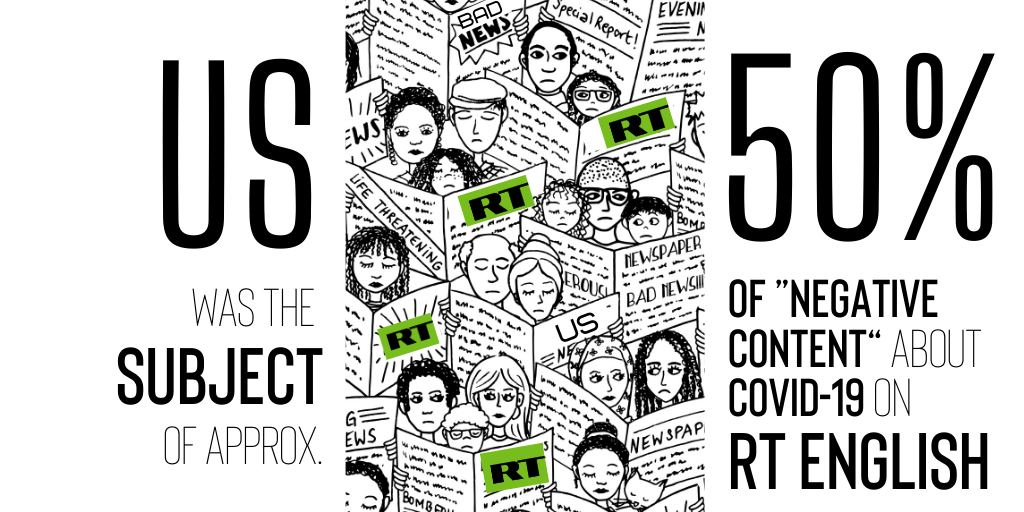 The Stanford Internet Observatory analysed RT’s English-language coronavirus-related content and found that US was the subject of approximately 50% of clearly ”negative content“.

As for topics, it turned out that “negative” content highlighted political dysfunction, diplomatic conflicts and conspiracy theories in the US, the UK, France, and the EU.

The analysis looked at approximately 1,900 posts that contained coronavirus-related terms and appeared on RT’s English-language Facebook Page from January 1 to June 1, 2020. The content was then coded to establish editorial slant, the country mentioned, addressed themes, and genre.

Over half of this content was dedicated to four themes: the spread of the virus, lockdowns, political responses to the pandemic, and human-interest stories.

“While approximately 68% of this content was editorially neutral — that is, it did not exhibit a clear editorial stance disparaging or praising the subject of the content, almost 80% of opinion pieces appearing on RT’s English-language were obviously negative in tone, and only 3% were positive,” the report says.

As for the main target of content with negative sentiment, US was in the lead with 50%, followed by UK (10%), France (6%), Italy (2%), and Germany (2%). Despite the majority of content being neutral, the negative content clearly outweighs the positive, as shown by the visual below. It should also be noted that in many cases the negative sentiment was addressed towards The West, not a specific country.

“If we filter content according to the most prevalent “negative” themes — politics, unrest, media, panic, overreaction and diplomacy — it is clear that they are correlated with just a few countries and one bloc: the US, the UK, France and the EU,” the Stanford Internet Observatory report says.

RT also claims that the reaction of these Western countries to the pandemic was excessive, despite many other countries using similar approaches. The researchers also noticed that RT praised Russia and China for the very same measures.

A comparison of how different countries were covered shows that Russia and China were well in with RT, while other countries received relatively little positive sentiment. 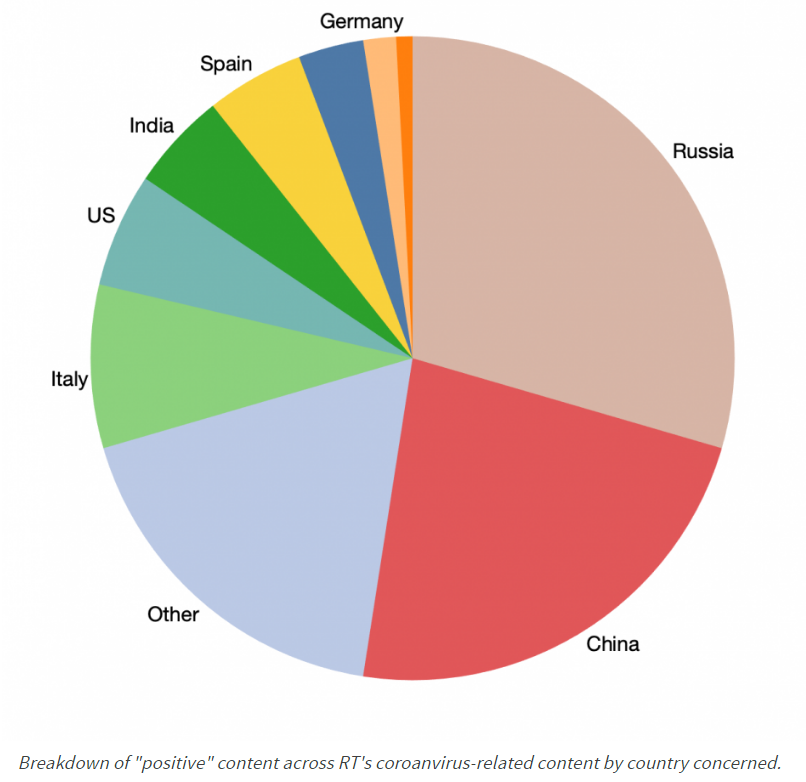 The key takeaway from this report would be that RT’s content showed political dysfunction, growing unrest and creeping authoritarianism in the US, UK and EU countries. As for Russia and China, the content mainly revolved around the spread of the virus, equipment, lock-down and human interest topics. As already mentioned, Russia and China also received most of positive sentiment and Stanford Internet Observatory also points out that this positive content generated more social media engagement as negative content.