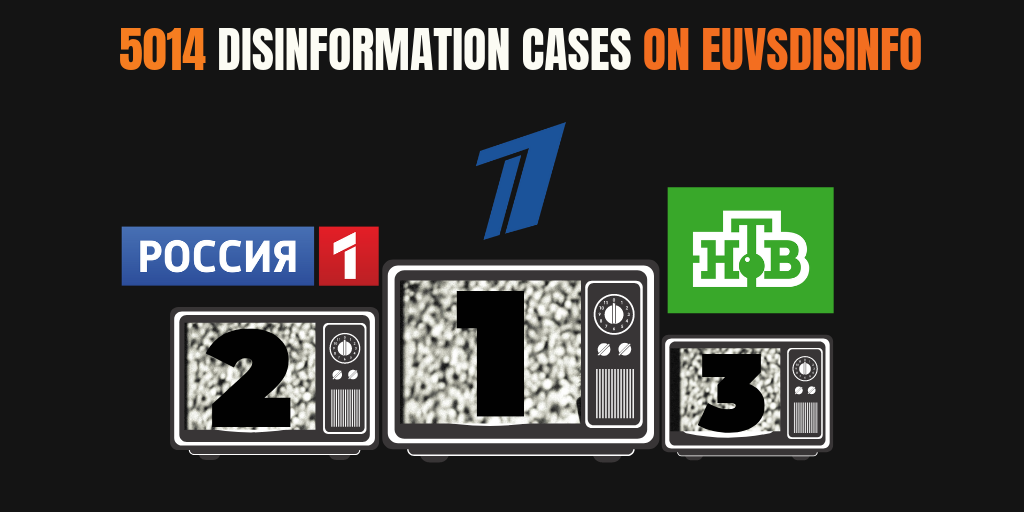 From deadly mother in-law to nazis in power in all possible places, the EuvsDisinfo team has collected more than 5000 disinformation cases since November 2015.

But what’s behind those cases? What are the channels that emit disinformation narratives? And perhaps most importantly, how does the world look from the viewpoint of Russian state-owned TV?

To answer those questions a report titled “How Russian media foments hostility towards West“, published by the The Black Sea Trust for Regional Cooperation (a GMF project) and the Hybrid Warfare Analytical Group of Ukraine Crisis Media Center comes in handy. The report states that TV is the most popular of media in Russia and an average Russian adult watches it 4,5 hours a day. The most popular TV channels are Channel One, Russia 1 and NTV, with a weekly total reach of 76% of adult Russians.

Pervyi Kanal is represented in our 5000+ strong database with 440 cases and many of them come from the good old “Vremya Pokazhet” programme that regularly engages in bashing Ukraine – and sometimes even the guests of the show. The latest disinformation from that show we have in our database was about the West pushing Poroshenko to power again and him using a military clash with Russia to postpone the election.

In second place is Rossiya 1 with 295 cases in the database. The talkshows “60 Minut” and “Vecher s Vladimirom Solovyovym” can boast cases like The outcome of Ukrainian election will be decided in Washington, Poland is ready to recognize the independence of Donbas in order to destroy Ukraine  or Yulia Skripal was raped and is pregnant. A nice example of “60 Minut” can viewed here:

Third place belongs to NTV with 129 cases. The most prominent show has been “Mesto vstrechi” with cases like The political elite of the EU is following the orders from the US when imposing sanctions on Russia or The EU is conducting a hybrid war against Moscow.

So what’s the takeaway? In 2017, EUvsDisinfo wrote an article stating that Russian television is not about Russia. And based on the impression one could get from the narratives mentioned above, nothing has changed.