Skip to main content
Figure of the Week
December 18, 2019 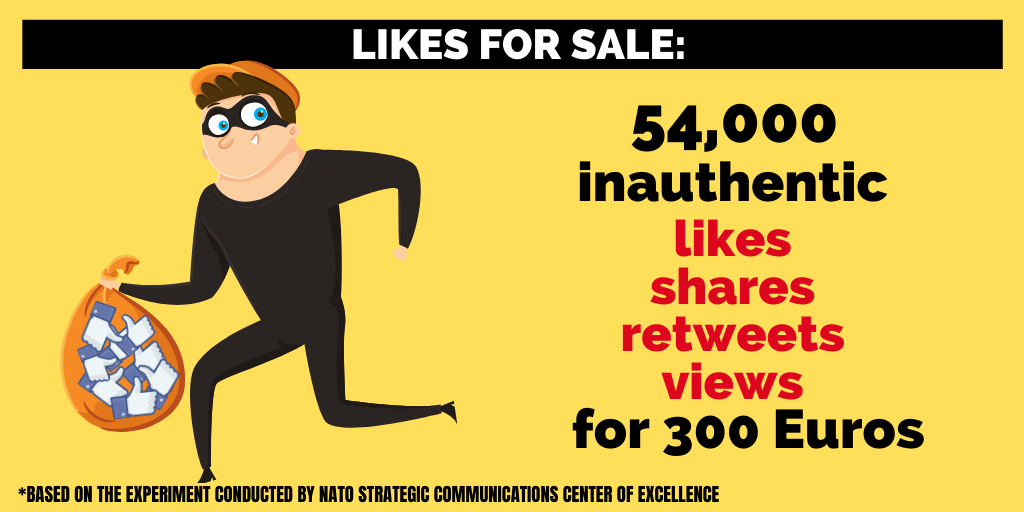 The industry of social media manipulation is available, cheap and efficient, while the largest social media platforms are failing to tackle coordinated inauthentic behaviour online. These are the troubling findings of the latest study presented by NATO Strategic Communications Centre of Excellence in Riga (NATO CoE).

To test the ability of social media companies to uphold their voluntary commitments and combat manipulative behaviour on their platforms, experts at NATO CoE conducted an experiment:  using the services of so-called manipulation service providers they bought artificial engagement on 105 different posts on Facebook, Instagram, Twitter, and Youtube.

For only 300 euros, the experts were able to purchase over 54,000 inauthentic social media interactions (likes, shares, comments, video views) with little to no resistance. The vast majority of fake accounts and the behaviour they engaged in remained online, even after the inauthentic accounts were flagged to the social media platforms themselves.

The study and earlier research of the NATO CoE sheds light not only on the shortcomings of the measures social media companies have taken to prevent and combat online manipulation, but also on the lucrative black market of social media manipulation.

Here’s what they found:

2. The cost of manipulation services is linked to how successful the social media companies are at combating manipulation. The more efficiently the inauthentic accounts are removed, the more time and money must be spent to replace them. And the costs are passed on to the “customers”. It is telling that manipulation on Instagram is the cheapest. Nevertheless, the price of social media manipulation does not necessarily reflect quality of “service”.

3. More than 90% of bought engagement is used for commercial purposes (think about that the next time you see ads to buy a certain shampoo!)…

4. …however, the tools and methods developed to scam the advertising industry are also used for political interference. The NATO CoE experiment revealed that inauthentic accounts have also been used to buy engagement on 721 political pages, 52 government pages, including the accounts of two presidents, as well as European and American politicians.

5.  It is the job of professionals: almost all of the manipulation service providers were highly responsive and engaged in “customer care”, answering questions, reacting to complaints and some even offered a guarantee to top up manipulation numbers, should the social media companies counter their efforts.

6. It is all out in the open: forget the dark web and clandestine hackers. Manipulation service providers fearlessly promote their services and advertise on the biggest search engines. Ironically, providers of artificial engagement on YouTube are not shy of advertising on Google – the owner of the video viewing platform.

7. The black market is huge. NATO CoE experts have identified hundreds of providers, several of them with many employees and significant revenue. In fact, according to recent reports, inauthentic marketing may be a 1.3 billion dollar per year problem. But the potential cost for the integrity of online conversations is even higher.