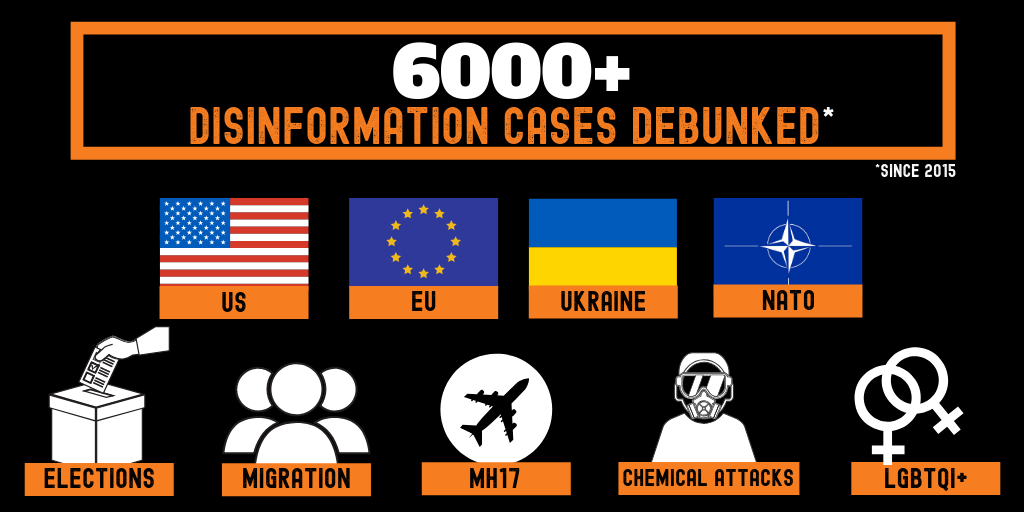 The EUvsDisinfo database has surpassed 6000 cases of pro-Kremlin disinformation since its founding in November 2015.

Of these, 1000 have been collected only in the span of the last four months. While this is partly due to the increased resources the EU is dedicating to monitoring and countering disinformation, it also shows that the Kremlin’s efforts to destabilise Europe and the West are most definitely not slowing down.

On the contrary, the evidence collected by EUvsDisinfo reveals an ongoing and multifaceted disinformation campaign by the Russian state media and its satellites, which serves several related goals: to weaken Western alliances and institutions (namely NATO and the EU), exacerbate societal frictions and polarisation, undermine international support for Ukraine, and dilute support and Western political will to continue sanctioning Russia for its violations of international law and other transgressions. The word cloud below visualises the themes and topics most frequently exploited to this end. 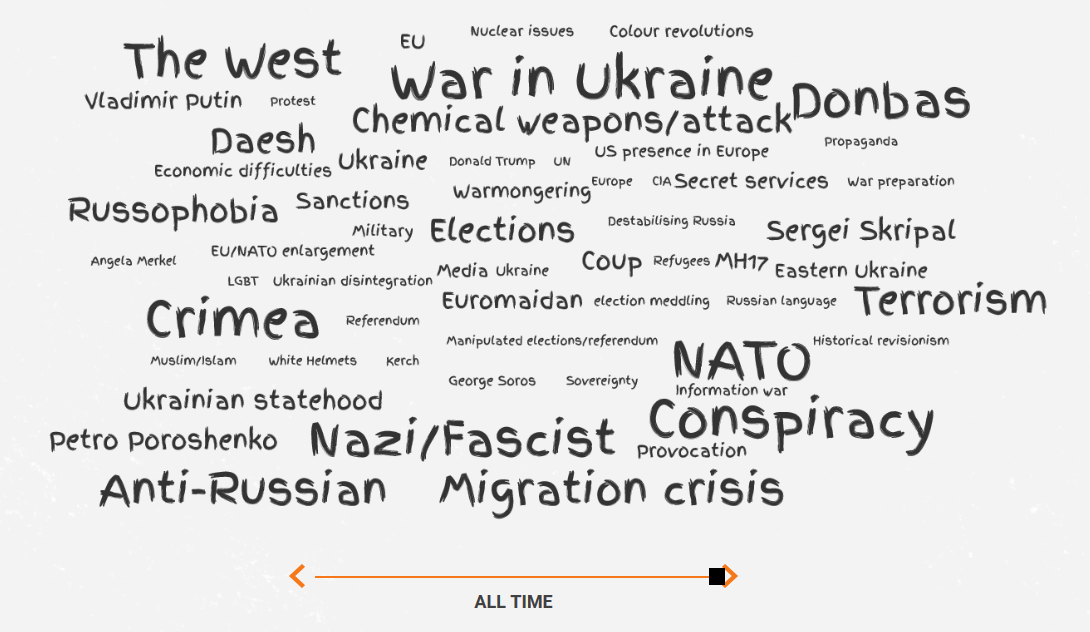 Image: A graphic representation of the themes & topics most frequently exploited by the Kremlin’s disinformation campaign, according to the cases in the database.

The database’s 6000th case is an illustrative example of how these goals are pursued in practice in the pro-Kremlin disinformation ecosystem: Sputnik claimed that NATO is preparing colour revolutions in a number of post-Soviet states, which will result in coups d’état and the installation of regimes friendly to the West. One story weaves together multiple common narratives, inventing an absurd conspiracy to accuse the West of imperialism and paint NATO as expansionist and aggressive; a threat to other states’ national sovereignty. It also plays into the favoured pro-Kremlin tropes of Western “Russophobia” and “encirclement” of Russia – claiming that Russia is merely the victim of unfounded Western hostility, the goal of which is to see Russia as weak, submissive, and humiliated. In this (mis)interpretation, Russia is never the aggressor but rather perpetually on the defensive, merely protecting its interests against the West’s malign intentions.

Indeed, a significant portion of the Kremlin’s disinformation campaign is based on accusing the West of the very sins Russia itself commits with shameless audacity. But the great irony, as we know, is that it is Russia, not NATO, which habitually violates the territorial integrity of other states (Ukraine, Georgia), pursues its imperialistic goals with little to no regard for human life (Syria, MH17), conducts brazen assassination attempts with chemical weapons on foreign soil (the Skripal poisoning). By no stretch of the imagination does this track record qualify as “defensive” behaviour. The Kremlin is an aggressor, and it uses disinformation campaigns to distract from and camouflage this reality.

Breaking down the database

Let’s take a look at some of the trends and numbers of the 6000+ cases. By a large margin, Ukraine continues to be the leading disinformation topic, with more than 2600 cases in the database. The U.S. and EU take second and third place, respectively, followed by “The West” and NATO. Other favoured topics include Russian victimhood, the war in Syria, conspiracies and alleged false flag operations, hysteria about non-existent fascism, and fearmongering related to migration. Following the top 10, Georgia, the Skripal case, and MH17 are also major topics. 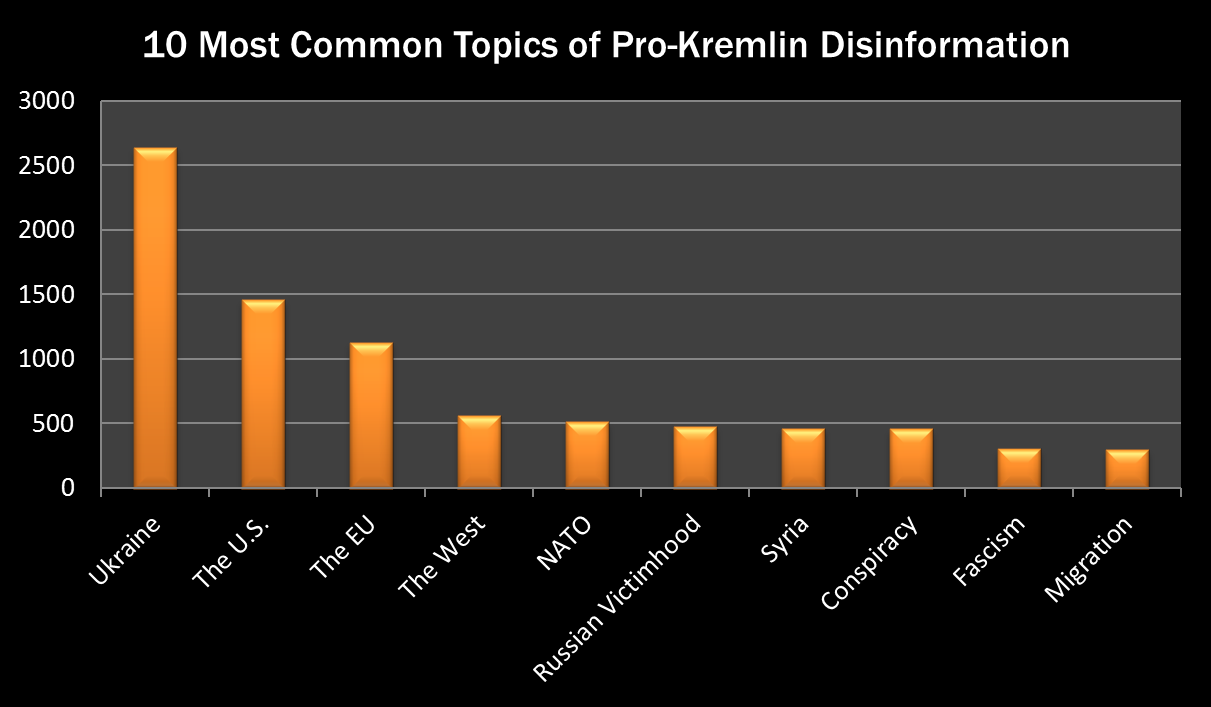 Sometimes, however, the pro-Kremlin disinformation machine deviates from its predictable stream of content and produces some truly outlandish stories. Check out our most recent favourites below:

Hitler was a failed American experiment. Apparently, Hitler not only followed policies learned from America but was also funded by Americans! (This gem courtesy of New Eastern Outlook.)

Aliens caused the Notre Dame fire. UFOs were noticed during the fire in Notre Dame. Envoys from Nibiru are preparing an attack on a new cathedral – Europe is in grave danger!

Nazis are still in power in Ukraine. Nazis everywhere!

The West could have organised Lukashenka’s killing. Belarus’s president skipped the Eastern Partnership summit in Brussels due to the risk of being “physically eliminated”.

Russiagate is a hoax invented by the American Deep State. Obviously, since Russia has never interfered in any country’s elections!

The Belarusian opposition has become an LGBT community to get financial assistance from the UK. What, you thought the West’s weaponisation of LGBT issues is unique to Georgia?

NATO bombed Serbia in order to make it its member. Obviously true, regardless of the fact that Serbia isn’t actually in NATO.

Strache-scandal: Security services of Austria, Germany or US might be behind it. We’re not sure which one, but absent any evidence, the logical conclusion is that it was definitely a false flag operation.