Skip to main content
Figure of the Week
December 10, 2019 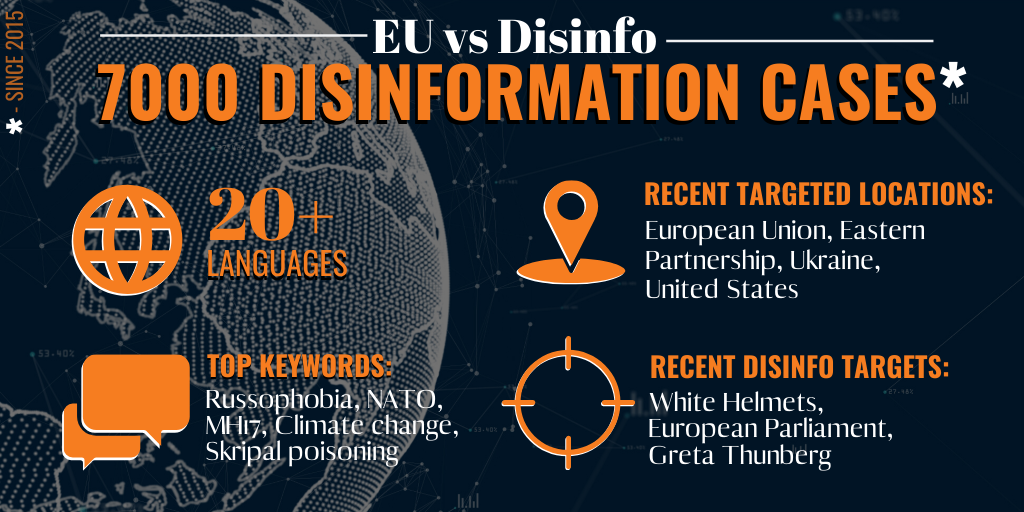 As the EUvsDisinfo database grows bigger every week, we take a look at the last four years of recording and challenging pro-Kremlin disinformation. Who made it to the Hall of Infamy?

Students at Lviv University who use Russian social networks will not pass their exams – that was the essence of the first case of pro-Kremlin disinformation recorded and debunked in the EUvsDisinfo database. In reality, pro-Kremlin media blew out of proportion a personal post by one of the university teachers, and the claim was officially denied by the university itself.

It was 2015, and the European Council had just adopted a mandate for a new communication team to be established within the European External Action Service, with the aim of addressing Russia’s ongoing disinformation campaigns. Later on, this mission would expand to communicating and promoting EU policies and values in the Eastern neighbourhood and supporting independent media.

Four years and over 7,000 disinformation cases later, EUvsDisinfo is a full-fledged project within the EEAS, monitoring and covering pro-Kremlin disinformation targeting more than 20 countries, including EU Member States, the Eastern Partnership countries, Western Balkans, and the Southern neighbourhood.

The first case in the EUvsDisinfo database proved to be a harbinger for what was to come in the next four years – it foreshadowed how Ukraine would continue to be the main target of pro-Kremlin disinformation throughout the last four years. All in all, cases targeting Ukraine constitute over 40% of all content in the database. Other frequent targets are NATO and the US. The EU and the elections to the European Parliament this year have also been targeted heavily by pro-Kremlin outlets – almost 13% of recorded cases reveal (in)direct attempts to meddle in elections. Not surprisingly, topics that have made the disinformation machine churn the most have featured prominently in the database as well; these include the poisoning of Sergei and Yulia Skripal; the shooting down of MH17 flight; and attempts to compromise the activities of White Helmets volunteers In Syria. Among others, the year 2019 has seen plenty of conspiracy theories undermining the scientific consensus regarding climate change, as well as hateful narratives targeting climate activist Greta Thunberg.

As the clash between reliable information, manipulation, and disinformation continues, EUvsDisinfo is here to help you make informed and independent decisions.