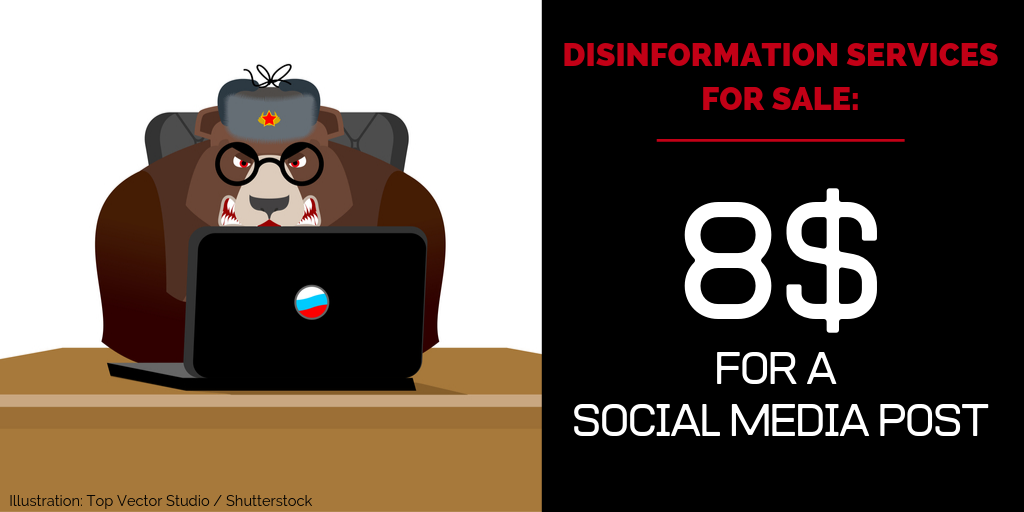 According to a recent experiment, hiring someone to run a disinformation attack on a company would cost you $8 per social media post.

In an attempt to understand the business model of disinformation service providers, a team from Recorded Future – a security solutions company – dived into Russian-speaking forums to find two entities offering disinformation as a service. One received the task to generate positive PR for a fictitious company, while the other was ordered to spread accusations of unethical business practices about the same enterprise.

The experiment showed that it is very easy to hire disinformation service providers. The disinformation created in the experiment did not only stay on a few random social media accounts, but a large number of accounts were employed for spreading disinformation without triggering content moderation controls. And while the articles meant for English-language online media needed rewriting, they were eventually published.

Based on the importance of the outlet, the black market prices for publishing an disinformation article ranged from $180 at business websites and rose up to $8,360 for Reuters, $13,370 for Mashable and $49,440 for Financial Times. Looks suspicious? Definitely, considering that mysterious service providers offered no examples of their success in penetrating well-established outlets or any other evidence.

As for social media manipulations the prices in the “menu” ranged from $8 to $25 and the authors of the experiment claim that the posts can still be found online. In addition, the fictitious company was also offered search engine optimization to make those posts and articles in traditional media fly even further. One could also pay $65 for spreading material by contacting a media source directly and $100 for 10 comments for a given article or news story.

While distributing disinformation on a large scale has until now usually been regarded as tool for affluent state-actors in control of significant human resources, the study by Recorded Future makes the opposite point. Due to the low costs and availability of providers of malicious service, disinformation is spilling over into the private sector, abusing social media platforms algorithms and avoiding serious checks.