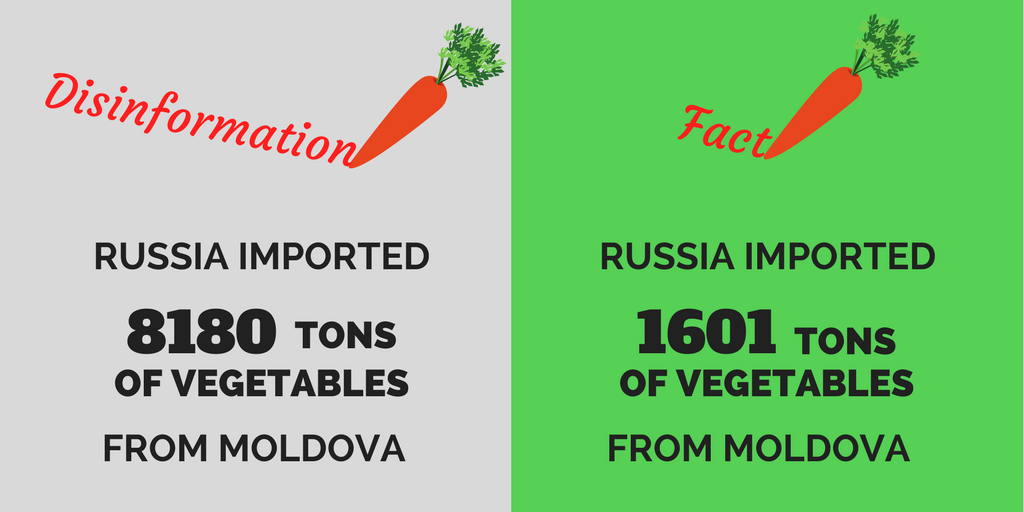 Earlier this month, Russian state television made an astonishing claim about Moldova’s trade with the European Union. According to the Rossiya 1 channel, the EU is “turning up its nose” at Moldovan products and imported a mere 575 tons of Moldovan vegetables during the first half of 2017. Russia, by contrast, allegedly imported as much as 8,180 tons. The report concludes that Moldova has not benefited from its free-trade deal with the EU and “dreams of recovering the Russian market.” The real figures, however, tell a very different story. Following the Rossiya 1 report, titled “Made in Moldova: Europe is not interested,” suspicious Moldovan journalists contacted their country’s Agricultural Information Centre for official trade statistics. According to official figures, Moldova exported 1,499 tons of vegetables to the EU during the stated period and only 1,601 tons to Russia – five times less than claimed by Rossiya 1. What the report omitted to say, too, is that the EU is a much more generous customer than Russia. Data from the National Bureau of Statistics show that the EU bought $51 million worth of Moldovan fruit and vegetables during the first half of 2017 while the entire Commonwealth of Independent States (CIS), which includes Russia, paid Moldova only $36 million despite larger imports. When it comes to Moldovan fruit and vegetables, Russian TV clearly doesn’t know its onions.