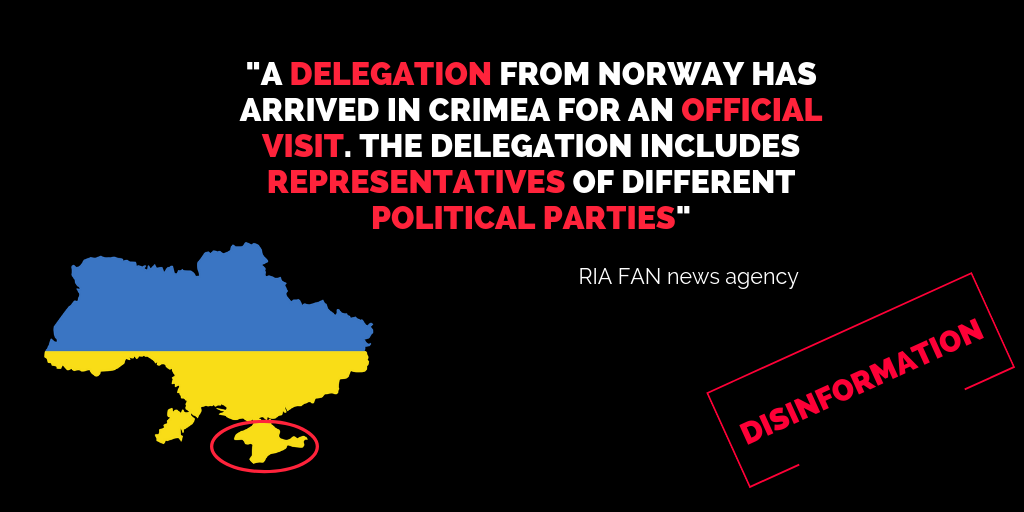 “A delegation from Norway has arrived in Crimea for an official visit. The delegation includes representatives of different political parties”.

This information was recently spread across Russian media with varying degrees of detail.

The above quotation is taken from RIA FAN; a news agency which is in fact a “rebranded” version of the Internet Research Agency in St. Petersburg, also known as the “troll factory”.

But similar messages were communicated also by other Russian media.

The daily newspaper Komsomolskaya Pravda reported that “the 9 members of a Norwegian delegation arrived in Crimea on 30 September.” Kremlin-owned RIA Novosti repeated the line that the “delegation” included “representatives of different political parties”. Gazeta.ru informed that “the delegation’s visit will last until 6 October”.

What really happened was that a group of Norwegian individuals, disregarding advice from the Norwegian government, went on a private trip to the Russia-annexed Ukrainian peninsula.

There they were met by local authorities as if they were an official delegation, and their trip was used for the propaganda purpose of making it look as if there is significant Norwegian support for Crimea’s current Russian authorities.

The key words “delegation”, “official visit”, “representatives” and “political parties” all add up to the creation of this disinformation narrative.

The incident, which was also reported by StopFake, echoes previous cases when groups arriving in Crimea have been used for such manipulations.

A recent similar example was when RIA Novosti reported that “a delegation from the US calls Crimea Referendum expression of the will of the people,” with many other Kremlin-loyal media following suit.