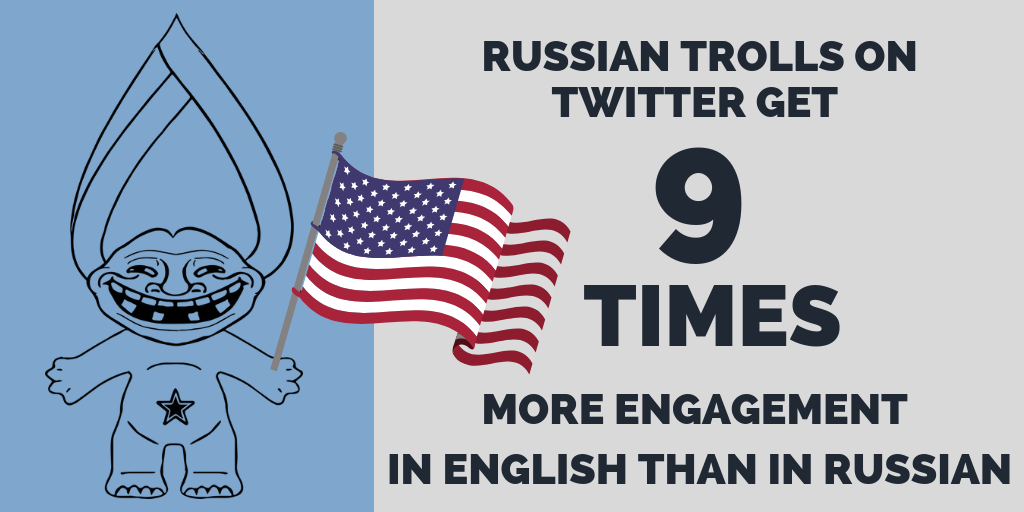 Although Russian internet trolls actively seek to manipulate audiences at home, a new study shows that their influence campaigns are much more effective in the United States than in Russia.

The IRA has been indicted by U.S. prosecutors for its attempts to interfere in U.S. politics, including in the 2016 presidential election campaign.

Details of the tweets were released by Twitter in October.

According to the Daily Beast, the data show that over a period of four years, tweets posted by IRA-linked accounts in Russian or any language other than English earned an average of 1.73 retweets, likes, or replies.

Surprisingly, despite the revelations that Russia used social media in its bid to influence the 2016 U.S. election, IRA-linked tweets in English performed even better after the vote.

The tweets had the biggest pick-up in the United States. Tweets targeting U.S. audiences were designed to appeal to all sides of the American political spectrum, and many of the accounts posed as American citizens.

Accounts posing as African-Americans, in particular, have surged in popularity since the victory of Donald Trump.

This includes #Blexit, a movement that urges black voters to reject the Democratic party and that has been heavily promoted by Twitter accounts known for previously spreading pro-Kremlin disinformation.

The Daily Beast’s analysis also reveals that Russian trolls sought to drive traffic to blogs and websites linked with the IRA, such as Russia’s Federal News Agency (FAN) or the English-language website ReportSecret.