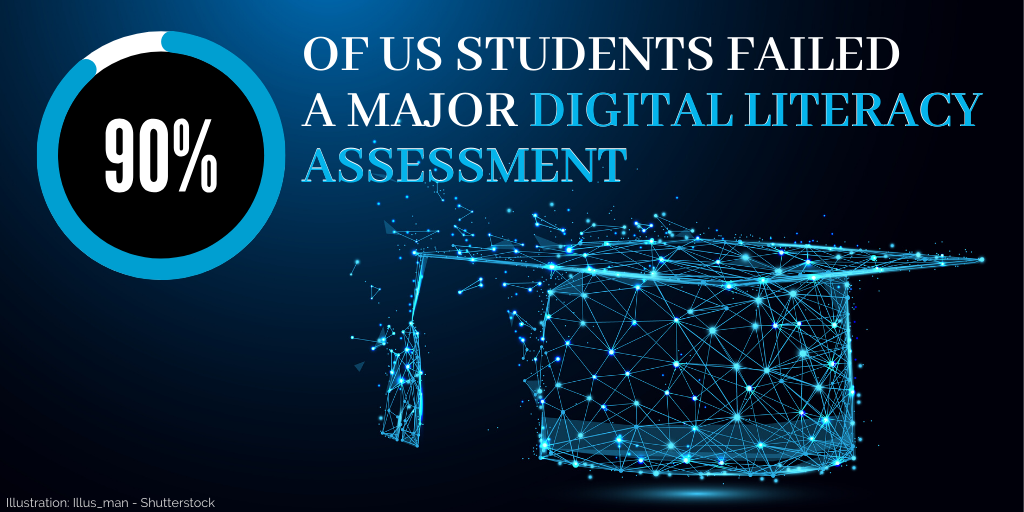 These results naturally raise questions about digital literacy rates among youth in the EU and other countries, and highlight the need – if we are to sustain the health of our democracies in the face of disinformation – to radically overhaul our approach to digital education, critical thinking, and media literacy.

The study, conducted by the Stanford History Education Group, involved six digital evaluation exercises administered to a national sample of 3,446 students that aimed to assess their ability to correctly evaluate digital sources on the internet. The sample was selected to match the demographic profile of US high school students.

90% of students received no credit whatsoever on at least four of the six tasks, while only 3% received full credit. For example, two thirds of students failed to discern between news stories and online advertisements on the homepage of US online magazine Slate. Meanwhile, 52% of students believed that a silent, grainy video claiming to show ballot-stuffing in the 2016 Democratic primaries indicated “strong evidence” of voter fraud in the United States. In fact, the video was shot in Russia – and only three students correctly traced its source, even though a quick online search produces numerous articles debunking the lie.

And in another task, 96% of students failed to consider why a website on climate change with links to the fossil fuel industry might not be reliable. Rather than explore the site’s origin and backing – even though the assignment prompt encouraged them to search online to verify this information – students evaluated the site’s credibility on the basis of superficial aesthetic indicators, its self-presentation on the About page, and its top-level domain (.org).

Unsurprisingly, the students’ demographic data indicated that socio-economic status, geographic location and locale (urban, suburban, or rural) as well as race/ethnicity were strong determinants in their performance on the assessment. The inequalities that derive from these demographic differences inevitably impact student success across a wide variety of domains, with digital literacy and critical consumption of information being no exception.

Despite increased emphasis on media and digital literacy education in many Western countries in recent years, it is clear that the effectiveness of these policies continues to lag behind digital reality. And while this study only surveys American students (who admittedly underperform on many academic indicators by comparison to their European counterparts), its results are sufficiently disquieting that they should also serve as a wake-up call for European countries to dramatically step-up their commitment to fostering rigorous curricula for digital literacy and critical thinking for students of all ages.