Skip to main content
Read this article in Русский
Figure of the Week
July 01, 2020

Figure of the week: up to 16 times 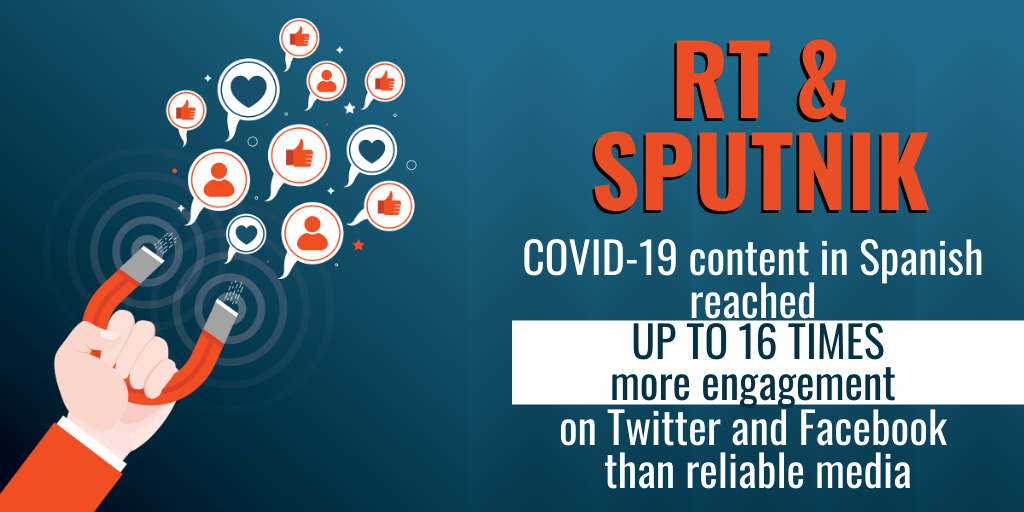 On social media, coronavirus-related content published by RT and Sputnik in French, German and Spanish languages can achieve higher average engagement per article than reputable media outlets, a recent study by the Oxford Internet Institute found. For example, RT and Sputnik content in Spanish, which targets large audiences in Latin America and the US, at times reached up to 16 times greater engagement on Twitter and Facebook than major outlets, such as El Pais and El Mundo. Some RT and Sputnik articles in French reached up to 5 times more engagement compared to content produced by Le Monde and Le Figaro; in German, nearly 2 times, compared to Der Siegel and Tagesschau. Over the course of three weeks in May and June, the researchers at the Oxford Internet Institute monitored the Spanish, French and German-language distribution of COVID-19 news from Russian, Chinese, Iranian and Turkish state-backed outlets. The researchers found that while state-backed outlets from Russia, China, Iran and Turkey have smaller distribution networks compared to the major news outlets and could not match their overall volume of engagement, they managed to attract significant median engagement per article rivaling established media. This illustrates how foreign state-backed media is able to polarise debates on social media networks – which, ironically, are forbidden in China and Iran.

According to the Oxford Internet Institute, the most engaging coronavirus-related reporting distributed by state-backed media outlets presented a combination of both reputable and false or misleading information that attempted to undermine Western democracies, bolster their own success, and fuel conspiracy theories. For example, the German edition of Russian state-controlled Sputnik published an article suggesting that the US was conducting “dangerous epidemiology” in the post-Soviet space. EUvsDisinfo has previously reported numerous instances of this narrative circulating across pro-Kremlin media, targeting Ukraine, Georgia and other EU Eastern Partnership countries. The Oxford Internet Institute notes that in particular Chinese, but also Iranian outlets were also linking the coronavirus to alleged US biological warfare laboratories. Russian state-backed media also engaged in more subtle tactics to amplify popular conspiracy theories. It has reprinted claims that Bill Gates has been working on depopulation policies under the guise of vaccination campaigns. Although the German edition of RT mocked these allegations and mentioned that Bill Gates has been a target of erroneous hypotheses, it nonetheless described them in detail without adequately challenging them. It also used a typical technique of pro-Kremlin disinformation, where a clear disinformation message is legitimised as “opinion” without making it clear that the statement is untrue.

In June 2020 Facebook announced that it would start labelling state-controlled media outlets on the platform and block their ads from targeting people in the US. The Oxford Internet Institute research showcases a need for a wider application of such policies. The pro-Kremlin media has repeatedly called this initiative a “form of censorship” inspired by the “globalist circle” and even suggested that Facebook is under the influence of the CIA. UPDATE: This article has been updated on the 7th of July, 2020, to state more accurately that it refers to the content published by RT and Sputnik in French, German and Spanish languages and that RT and Sputnik content in Spanish targets large audiences in Latin America and the US.