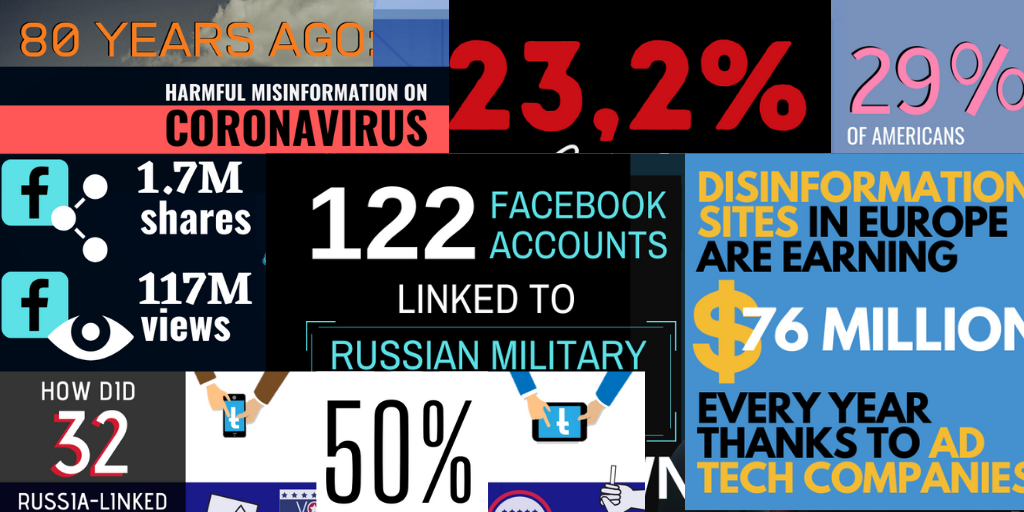 From inauthentic coordinated behaviour and major corporations supporting disinformation, to people believing Covid-19 is man-made – 2020 had it all.

A recurring theme in our Figure of the Week section this year was Facebook taking down accounts and pages that mislead the public about who they were and what were they doing. In January, one of such networks was found to have links to Russian military intelligence and was primarily targeting Ukraine, along with neighbouring countries in the region. This resulted in a takedown of 122 accounts, pages, groups, and Instagram profiles.

Another example of Russia’s activities on social media was covered by Norway’s public service broadcaster that discovered that at least eight media outlets in Norway cited social media accounts controlled by the St. Petersburg “troll factory” (Internet Research Agency) in their news stories.

But falling for a troll factory dedicated to deceiving people can be an honest mistake, as an analysis of 32 accounts connected to IRA showed how well they impersonate Americans and design posts to incite outrage, fear, and hostility. The IRA’s trolls have also become better at impersonating candidates and parties, and using apolitical and commercial content to better imitate authentic user behaviour to evade detection. 2020 was also the year when more and more actors adopted similar methods.

But let’s not get too entangled in social media, as the pro-Kremlin disinformation ecosystem also includes websites that benefit from advertising revenues from major corporations like Amazon, Burger King, Mercedes Benz, Samsung, Spotify, and Volvo via Google or Criteo ad services. The research by Global Disinformation Index shows that annually more than $76 million is spent on such sites spreading disinformation.

By March, the coronavirus related mis-/disinformation had become so widespread that a survey by the Pew Research Center found that nearly a third of Americans (29%) believed that COVID-19 was “most likely” produced in a laboratory. Of these, 23% believed that the virus was developed intentionally, while 6% believed that it happened accidentally.

During the same period, 30,000 Russians were polled and it turned out that almost one-fourth of Russians (23.2%) considered the COVID-19 pandemic a fiction, concocted by the “interested parties”. The effect of pro-Kremlin narratives continues to be especially visible in Eastern Europe and the Balkans.

Research on the narratives spread on social media platforms showed how people came to such skewed conclusions. A study by Avaaz discovered that misinformation on coronavirus was shared over 1.7 million times on Facebook and viewed an estimated 117 million times.

Oxford Internet Institute found that on social media, coronavirus-related content published by RT and Sputnik achieved higher average engagement per article than reputable media outlets. The difference was biggest in Spanish language with 16 times, followed by French with 5 times and German with 2 times.

Another study by the Stanford Internet Observatory analysed 1,900 coronavirus-related posts on RT’s English-language Facebook page. It turned out that the US was the subject of approximately 50% of clearly ”negative content“ and that coverage highlighted political dysfunction, diplomatic conflicts and conspiracy theories in the US, as well as in the UK, France, and the EU.

If present day is bleak and the future hopeless, improve the past

Historical revisionism also remained in the focus for the Kremlin and it’s controlled media. For example, the Molotov-Ribbentrop pact and its secret protocols on the delineation of “spheres of interests” between the two totalitarian powers was at the centre of efforts to blame the West for its alleged efforts to re-write history and diminish the Soviet’s role in defeating Nazism. However, what they fail to mention is that 80 years ago this cooperation also included Russia’s deportation of hundreds of refugees to the German authorities. Most of them were German anti-fascists, communists, and Jews, who were seeking asylum in the Soviet Union, and ended up being handed over to the Gestapo. Instead of admitting wrongdoings in the past, the Kremlin has actively worked on improving it’s image in history books, social media and pro-Kremlin outlets.