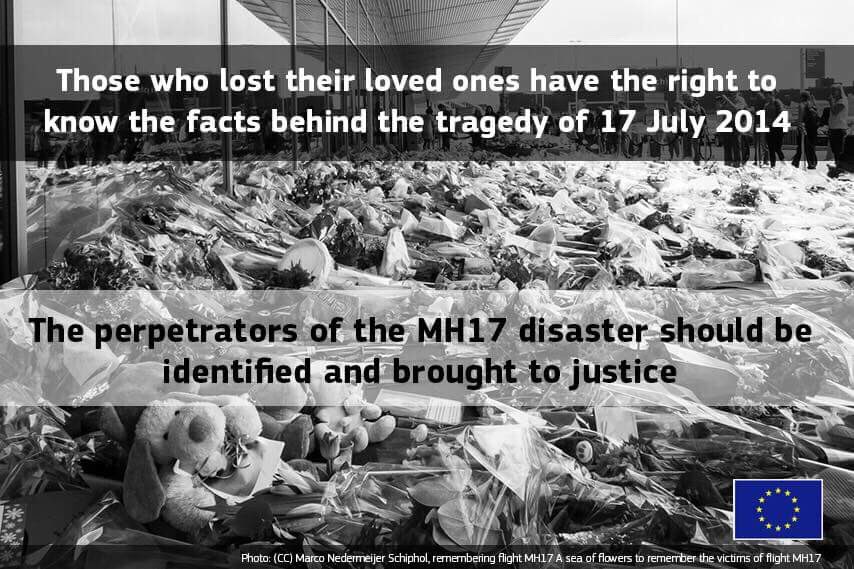 Where were you on 17 July, 2014? On this day a Malaysian Airlines flight, which had taken off from Amsterdam bound for Kuala Lumpur, was shot down over Eastern Ukraine, killing all 298 passengers and crew, among them 80 children. To many, this tragic event became a watershed: the conflict in Eastern Ukraine ceased to be a regional problem and moved much closer to the life of a larger, global international community.

Now, almost three years after, very detailed evidence has been gathered about the event. The governments of the states who lost most citizens in the catastrophe have set up a Joint Investigation Team (JIT), which has concluded that the plane was shot down by a BUK missile located in an area controlled by the Russia-supported rebels. Independent open source journalistic investigation has traced the missile launcher and the people who operated it from Russia into Ukraine and back again into Russia, and the Joint Investigation Team has agreed with these conclusions. With the anniversary approaching later this month, the states which are members of the Joint Investigation Team have collectively decided that the prosecution of suspects in the downing of flight MH17 can take place in the Netherlands.

But in the world of pro-Kremlin media, things are different. Since the day of the attack, these outlets have, perhaps more eagerly and systematically than in regards to any other issue, fabricated and disseminated a series of alternative stories with the clear aim of muddying the waters and creating the false impression that there is no clarity. The pro-Kremlin disinformation campaign in regards to the downing of flight MH17 is a textbook example of the important point that these kinds of campaigns rarely aim at making us believe in one particular truth. No, the aim has been and remains to confuse us, to promote the false belief that no clarity has been achieved and that we will probably never learn what really happened.

The latest example of pro-Kremlin disinformation about MH17 came last week, as we reported in the latest issue of the Disinformation Review, when different pro-Kremlin media, among them Lenta.ru, claimed that newly emerged documentation and testimonies prove that MH17 was downed in a carefully planned operation by Ukraine’s armed forces. It is telling that Lenta.ru’s story refers to the the findings of the Joint Investigation Team as a “versiya”, i.e. a “version” – meaning just one explanation of many. This formulation is at the core of the narrative of the confusion campaign in pro-Kremlin media.

As we have earlier reported, most recently in January, the list of “versions”, or alleged “theories”, in pro-Kremlin media is long – the story brought forward by Lenta.ru can be added to this list:

1. Ukrainian fighter jets were operating in the area around the crash, supposedly confirmed by a Spanish air traffic controller working in Ukraine named Carlos (Rossiya/Vesti: http://bit.ly/2evv8Xa);
2. The aim of the Ukrainian Air Force had been to shoot down President Putin’s plane (Lifenews: http://bit.ly/2eRF7nR);
3. For some “unknown reasons”, Ukraine had ordered the plane to descend just before the catastrophe (also Lifenews);
4. Local eyewitnesses said that some of the dead bodies had looked “unfresh”, and suggested that the plane had been loaded with dead bodies when it took off from Amsterdam (Russkaya Vesna: http://bit.ly/1n0rQbC);
5. MH17 was in fact flight MH370, which disappeared in March 2014 in Asia, a claim based on the untrue suggestion that no relatives of those killed on board MH17 had been identified (News2: http://bit.ly/2eGpWNO).
The Russian Government has also attempted to explain what happened, in different versions:
6. In July 2014, the Russian Ministry of Defence presented radar imagery to allege there was a Ukrainian jet close to MH17, and that Ukraine had moved BUK missiles closer to “rebel” territory;
7. Two years later, the Russian Ministry of Defence presented a different and contradictory set of radar imagery.
In addition, photo-shopped images were used to support the Kremlin’s narrative on MH17. See for example the below images, the first an original Reuters photo, the second a faked version shared on Facebook http://bit.ly/2hj9GDe; and a report on this pro-Kremlin fake here: http://f24.my/2i5LN2a.

(It is worth noting that most of the stories above are not based on any kind of evidence, e.g. “Carlos” in Example 1 never existed, and in any case there are no Spanish air controllers in the area).

As common sense has it, the first casualty of war is truth. We have certainly come to expect lies to be a part of the picture, perhaps even shameless lying about who killed innocent civilians on board a plane above the battle field; as well as lies about the EU funding concentration camps and about crucified children. More than ever, it becomes clear that, easy as it is to make up and spread disinformation, so is it demanding to get the truth out of the war zone in Eastern Ukraine. Without the work of investigative journalist communities and reporters on the ground, disinformation risks succeeding in its efforts to make us believe that we will never learn the truth.