Foucault, Did He Blaze a Trail for the Post-Truth Era? 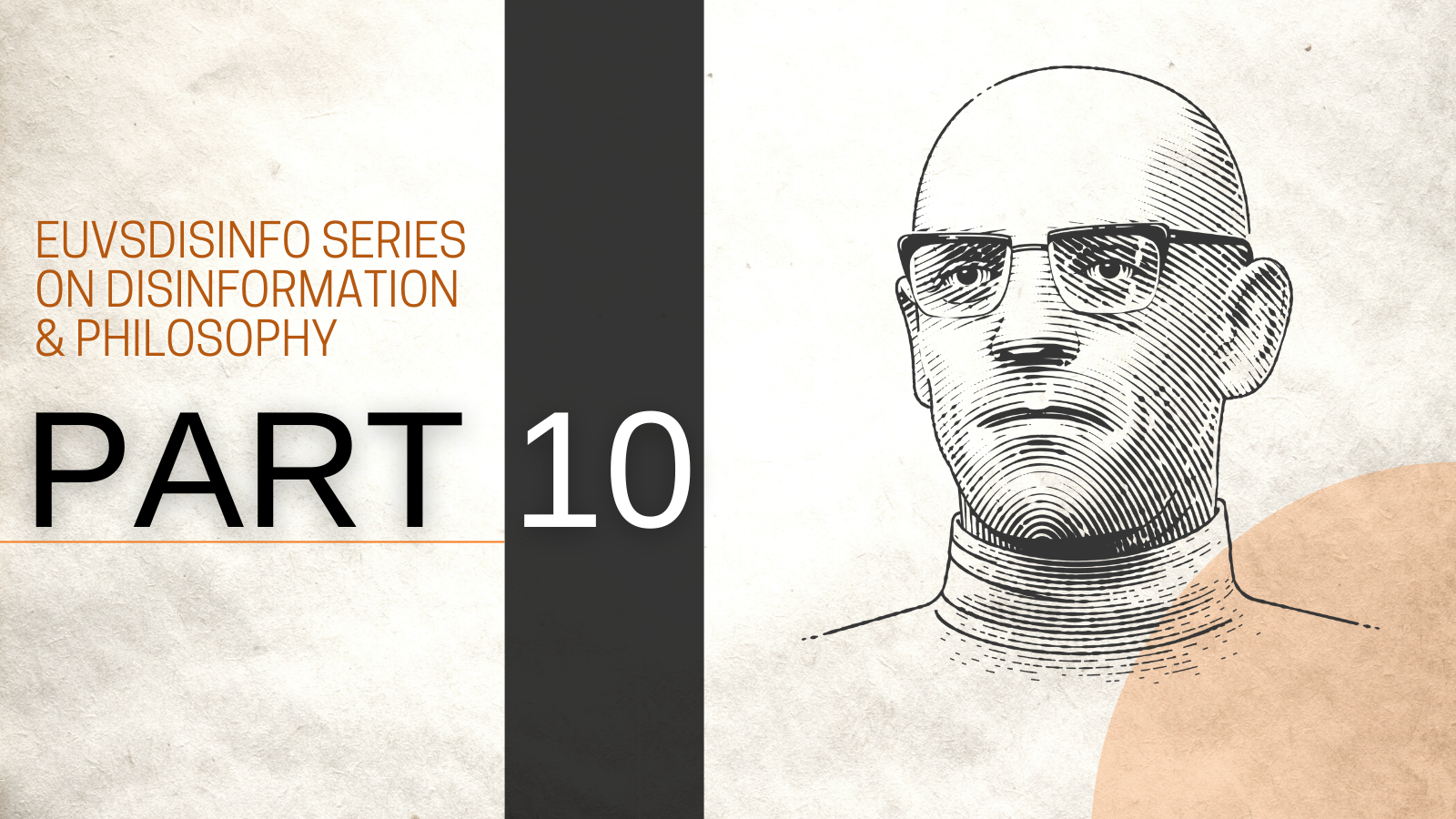 Trailblazer for the post-truth age?

Ideas can be powerful. According to some serious thinkers, Foucault’s ideas facilitated the age of disinformation and misinformation, or the “post-truth era”.

Academic philosophers were warning about postmodernism as far back as the 1980s, well before our times of fake. They even seriously tried to stop the main thinkers of that philosophical movement, like Foucault and Jacques Derrida, receiving any formal recognition.

An example of this was a bitter letter sent to the Times in 1992, in which several philosophers protested against awarding Derrida an honorary degree from Cambridge.

The dismay continues today. In 2017, the highly esteemed philosopher Daniel Dennett called the postmodernists “truly evil”; they made it “respectable to be cynical about truth and facts.” Susan Neiman, another well-known philosopher, claimed that post-truth and identity politics gained momentum because “well-educated people who went to good liberal arts colleges, who are inclined to go into the media” read so much Foucault.

Ironically, this resistance ignited curiosity about Foucault. What did he say, and how damaging was it?

Michel Foucault was born in Poitiers in France, and studied philosophy and psychology. The Stanford Encyclopedia of Philosophy called him a brilliant but “psychologically tormented” student. In the later part of his life he was active politically. He often protested on behalf of marginalised groups. Foucault died in 1984, an early victim of AIDS.

Foucault, together with Jacques Derrida, is broadly recognised as the most influential postmodern thinker. Both were interested in how structures (for example institutions and language) are used to create order and meaning in human experience.

According to Foucault, knowledge, as a structure, should never be analysed separately from power. In this line of thinking, he was clearly influenced by Nietzsche, and, to a lesser extent, Heidegger.

Foucault adopted an approach to explain systems that drew from Nietzsche’s genealogy. He observed historical transformations and manifestations of power and what they mean for the individual. Because for power to be effective, he argued, it must be hidden. This power can only be observed in the changes in social and political relations.

In his widely read Discipline and Punish, Foucault examines the evolution of the penal system. In the 18th century, it moved from corporal and capital punishment to the penitentiary system. Foucault stresses how this reform, making the system “gentler”, also became an instrument of tightened control: “to punish less, perhaps; but certainly to punish better”. Foucault also shows that this evolution is not the result of rationally inevitable trends, but the outcome of contingent twists of history.

Technology strengthens discipline. Foucault used the concept of panopticon to illustrate this.

The panopticon is philosopher Jeremy Bentham‘s plan for the “optimal prison”. It consists of a circular building. Each cell is inhabited by only one prisoner and has two windows. The first to let in light from outside. The second points to the centre of the circle-shaped building. In the centre is a tower where a guard can be placed to observe the prisoners. The prisoners – crucially – will never know whether the guard is present, and if they are being observed or not. Consequently, they will internalise the disciplinary power and adjust their own behaviour.

It is not difficult to see that modern technology, including social media, have panopticistic features.

At the same time, technology cultivates subjectivity. For example, by providing the illusion that your online world is tailored to your needs entirely, which it is not of course, this reinforces the idea that the offline world can also be moulded to your subjective needs.

There is No Spoon

A classic movie that brilliantly plays with ideas concerning technology, truth and reality is, of course, the Matrix. It helps us to understand Foucault.

In our article on Heidegger, we wrote how, paradoxically, the scientific method can lead to the use of images, building on other images, gradually walking away from reality. Reality becomes abandoned. The French philosopher Baudrillard famously called that forgotten reality “the dessert of the real”.

This inspired the makers of the Matrix. In this movie, the reality humans perceive is actually a simulation, created by computers to control humans. They don’t see reality but written (computer) text. Although they don’t recognise it as such.

On first glance, this seems quite postmodern: reality is made up of text. The movie suggests, however, that behind this constructed reality is the real reality.

Foucault would deny the existence of a deeper reality behind the images or beneath our language. According to him, metaphysically, there is no reality outside our minds.

Navalny as a Parrhesiast Speaker

The postmodern world view is accompanied by uncertainty. How should we deal with it? Foucault’s answer: read classical philosophy! To develop a certain attitude of truthfulness in chaos, antiquity can provide inspiration for philosophy as a way of life committed to truthfulness.

Foucault developed the concept of “parrhesia” as a mode of discourse in which one speaks openly and truthfully about one’s opinions and ideas, without the use of rhetoric, manipulation, or generalisation.

What characterises this parrhesiastic truth-telling? The combination of truth, courage and criticism. A person who speaks the truth in a parrhesiastic way, speaks the truth at the risk of his or her own life. The parrhesiast speaks ‘truth to power’: he or she criticises political ruler(s), thereby consciously running the risk of social exclusion, exile and (in extreme cases) death. Socrates was a parrhesiast, as were Rosa Parks and Martin Luther King. The ultimate parrhesiast of our times? It might be Alexei Navalny.

The problem with postmodernist philosophy is perhaps not the philosophy itself, but rather its followers. Some of them seem to think that as the world is a human construct, we can remake it as we please. This line of thinking does not follow from Foucault. Foucault would not discard the results of science, and his thinking does not imply universal relativism, or anything goes.

On the other side are those claiming that Foucault created a split between modernistic and post-modernistic thinking. They portray him as some sort of adolescent rebelling against philosophical tradition. This misrepresents both Foucault and that tradition. As we have seen, Kant, hardly a subjectivist, had already written about the problematic subject-object relationship, and the difficulties for us, as a subject, to be sure we really know the object.

Deconstructing the concepts that underpin our society is a tricky business. However, that should not lead to the exclusion of Foucault. The alternative to this risk might be worse, because it could entail abandoning critical thinking. As Arendt has said, “thinking itself is dangerous.”

Looking at the power relations behind public discourse should not necessarily lead to cynicism, disinformation and division by identity politics.

One who deconstructs certain truths, social norms or institutions, does not have to end up as a hardened identity-politician. Because those really committed to deconstruction should also deconstruct their own identity, as the publicist John Gray pointed out.

With Foucault, we could say we can only know our own identity if we recognise it changes constantly. This understanding of the relativity of one’s own identity, should make conversation with others (with similar relative identities) a lot easier.

Nevertheless, in practice, this is not easy for most of us. So maybe it is the other way round with Foucault. His thinking is perhaps not too cynical, but rather too idealistic in expecting people to be willing to engage in open discussion.

The question might not be whether Foucault was right or not, or plain evil, but rather:

Are we, as a society, able to engage in public discourse while also being willing to critically examine and deconstruct our own positions and identities?