From dance videos to coordinated lip-syncing in support of war 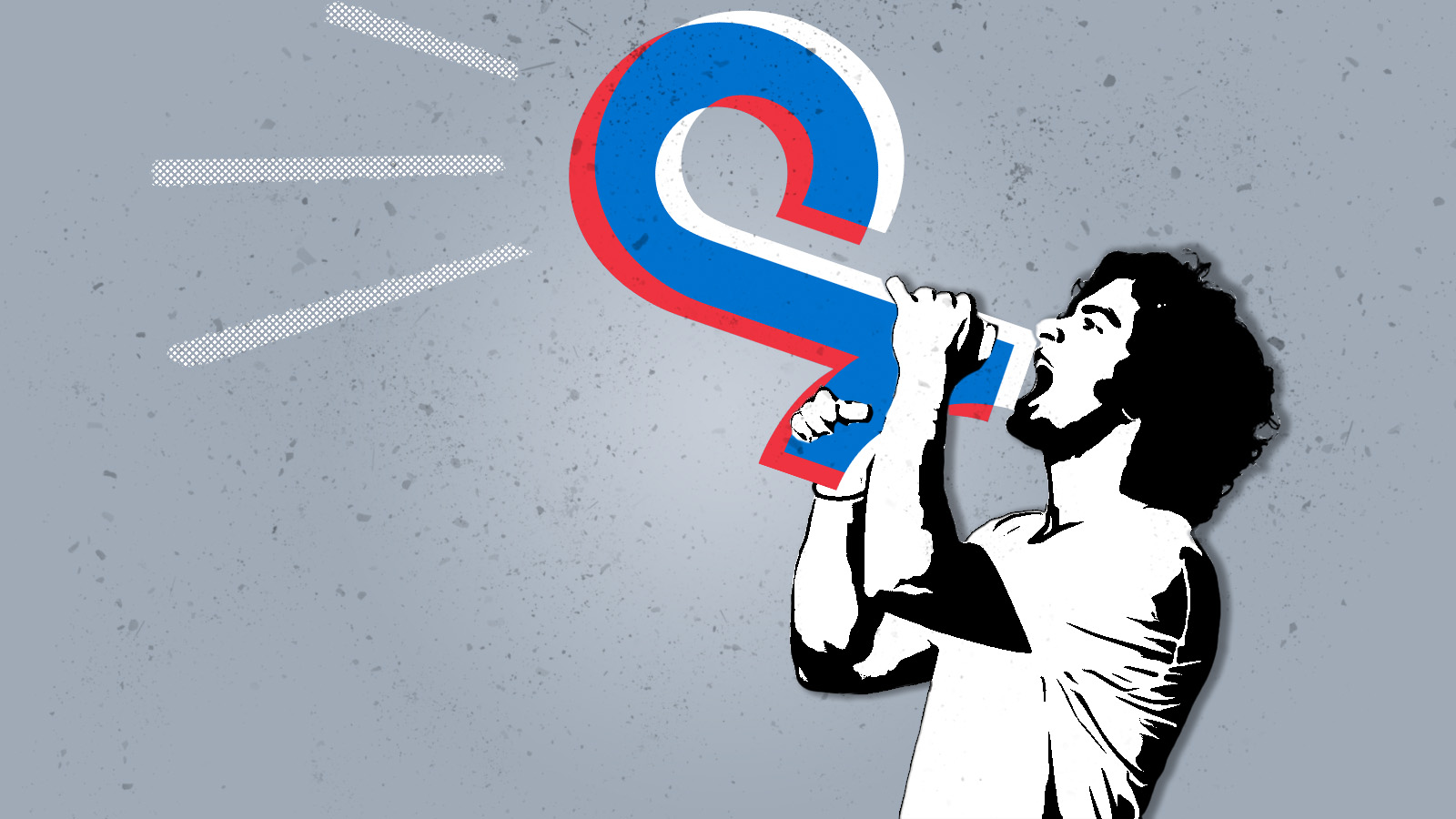 Social media platforms are widely used to spread disinformation, also during conflicts. With over 1 billion users worldwide, TikTok is no exception to the rule. The platform has taken the world by storm, allowing people to follow parts of the war in real time. Since Russia’s invasion of Ukraine, TikTok has exploded with videos shot on the ground: columns of military vehicles, instructions on how to drive an abandoned tank, dance choreos on the battlefield, cooking lessons in bomb shelters, etc. The other side of the coin is more ominous: TikTok has also seen an outbreak of disinformation videos praising the ‘special operation’. From self-proclaimed war experts to Kremlin-backed channels, TikTok has become a hotbed of war propaganda.

From disinformation to war propaganda

TikTok videos expressing support for the Russian invasion of Ukraine frequently use the toxic pro-war Z and feature demonstrations in favour of the ‘special operation’. Many videos justify the ‘special operation’ with the need to save Russian-speaking residents in Donbas from an alleged ‘genocide’. Russian servicemen are presented as the ‘saviours’ and ‘defenders’ that local people have been waiting for since 2014.

Well-known pro-Kremlin propagandists keep misleadingly claiming that the ‘special operation’ is only targeting Ukrainian military infrastructures and that US-funded labs in Ukraine are developing biological weapons to attack Russia. In the meantime, other videos blame Ukraine for not respecting the Minsk agreements and accuse NATO, the EU and the US of arming Ukraine with atomic bombs, of expanding towards Russia and of interfering in other countries’ internal affairs.

In response to the near unanimous international condemnation of Russia’s invasion of Ukraine, the #мненестыдно [#Iamnotashamed] hashtag has been trending on Twitter and TikTok, while many TikTok compilations refer to Russia’s greatness, often compared to the USSR and Imperial Russia. The top figure in the pro-Kremlin disinformation ecosystem to push this narrative was Margarita Simonyan, RT’s editor-in-chief. She reacted to the #мненестыдно hashtag and narrative by lamenting that the only thing she is ashamed of is that they [i.e. Russians] ‘did nothing’ for Donbas for eight years.

The role of influencers

Recently, a blogger raised allegations of Russian influencers being coordinated and instructed to recite the exact same script. In addition to the all too obvious overlap of messages, the fact that all the videos in question have now been deleted and six of the 13 channels that hosted these videos have changed their TikTok IDs since gives credence to this claim.

But these were far from the only coordinated videos that have been making rounds on TikTok. A number of other nearly identical videos are being pushed by popular influencers, all using the same audio clips, hashtags and filters. These channels – counting from tens of thousands to millions of followers – all look like ordinary TikTok accounts that people use to share pranks, dance videos and comedy content. However, as Russia invaded Ukraine, these accounts started publishing politically-oriented videos.

In one set of videos, the scene starts with the protagonist on one knee, holding a sign reading ‘Russophobia’, ‘Donbas’, ‘hate speech’, ‘cancelling’, ‘Luhansk’, ‘sanctions,’ ‘info war’ and ‘nationalism’ in English. The person then stands up and flips the sign, revealing the other side, which reads ‘Russian lives matter’. All these videos use the same song – a remix of Katyusha – and the same filter, featuring The Motherland Calls statue in Volgograd. They are all accompanied by a ‘Russian Lives Matter’ caption, as well as the #RLM hashtag. More than twenty identical videos have been created by various Russian influencers (see here, here, here and here, for example) with some of them generating hundreds of thousands of views, likes and comments. 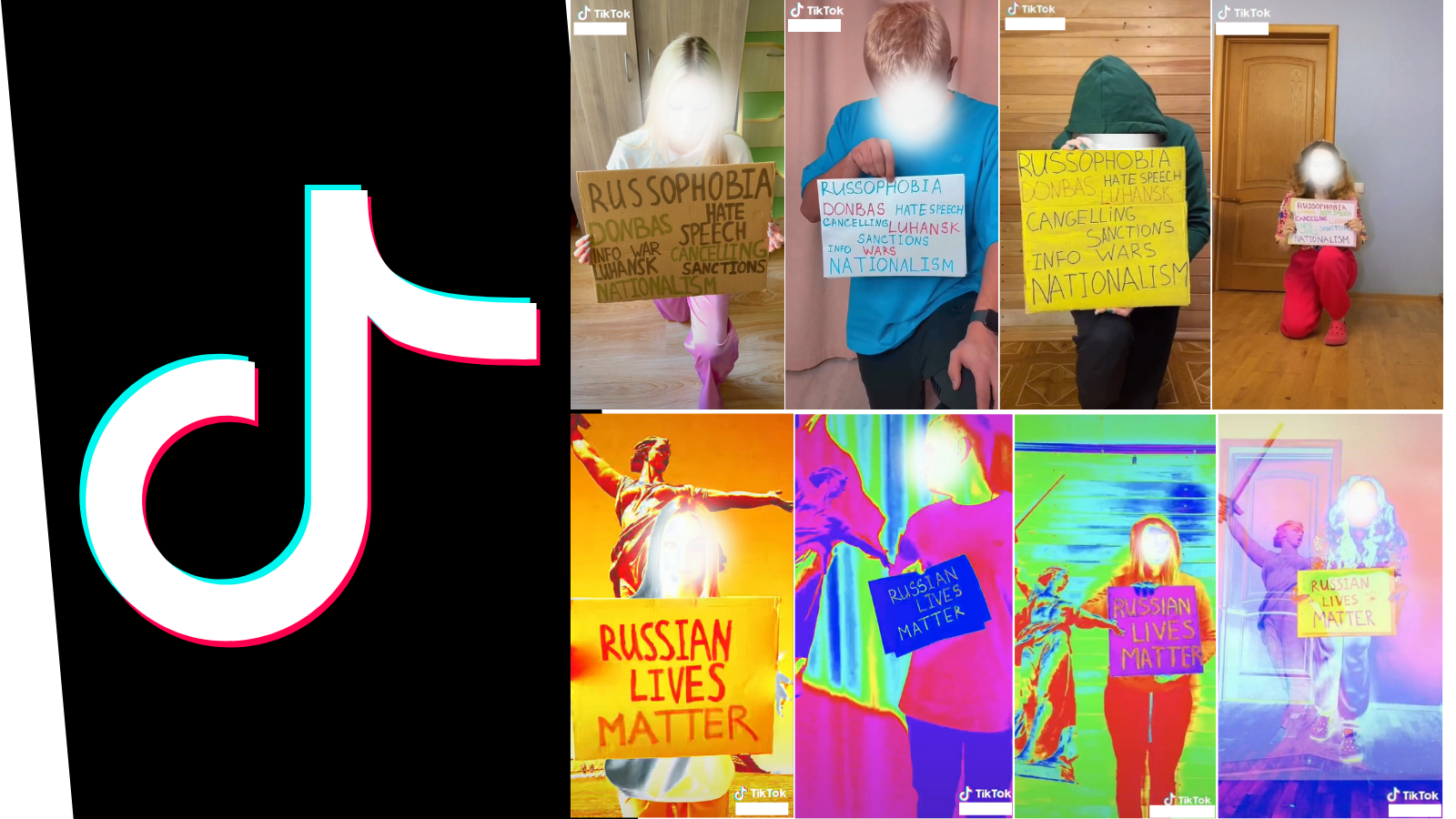 Could this trend be propelled by an actual grassroots initiative? Hardly. Another Russian influencer shared a story on her Instagram account (see below), showing a request for a video with clear instructions: ‘the blogger has to play a Donbass inhabitant who survived 2014 […]. Now he is safe already, because the Russian forces help DNR and LNR’. The message also instructs what hashtag and audio clip should be used to do the ‘lip-sync’. 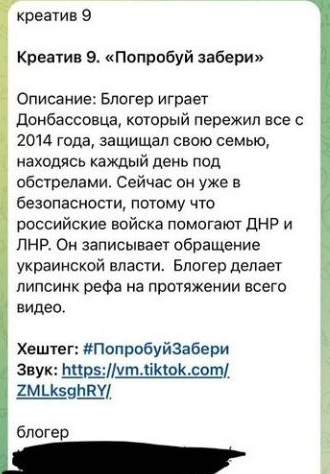 A quick search on TikTok shows that at least two videos (one here, another one now deleted) were created following those instructions. More so, one of the videos was published by an influencer who was also noticed reciting identical text from a script mentioned above.

Sponsored or paid content is commonplace on TikTok – and on other social media platforms, for that matter. Dozens of Telegram channels offer money to TikTok and Instagram bloggers to create themed videos. One channel in particular, MM-Media, announced (note: this and other links to posts by MM-Media are visible to members of the channel only, as the channel went private recently) at the end of February that there were going to be a lot of requests on political themes for a ‘big project’, with a ‘better budget’ going ‘over 20,000 rubles’ for a video. The owner of the Telegram channels asks TikTok bloggers ‘with over 5M followers’ to get in touch with her if they want to do ‘Government advertisements’. Since then, the channel has shared several calls with political themes to TikTok bloggers with at least 1.5M, 5M and 10M followers. In some of those calls, an example was provided as a reference. Dozens of videos following these instructions have been circulating on TikTok (here, here and here, for example). In another call, influencers were asked to form a Z with their fingers. Again, many videos following this request were shared on TikTok (here, here and here, for example). Recently, MM-Media’s Telegram channel launched a call for English-speaking bloggers to create videos on the theme of ‘stupid sanctions’.

Still, TikTok has become the birthplace of thousands of videos reporting on the war in Ukraine. The quest for popularity on TikTok generates millions of reactions and videos are massively reshared with many of them ending up circulating on other social networks, traditional media outlets and even TV. While there is no reason to doubt that most of the videos shared on TikTok are genuine and express personal opinions, it merits wider attention that there are also influencers who get paid for sharing videos supporting the ‘special operation’ and the Kremlin.

On TikTok, war conveniently fits in a virtual world where violence is trivialised. All of this for a few rubles. If anything, there are all the reasons to believe that TikTok’s importance in the battlefield of information will only keep growing in the foreseeable future.