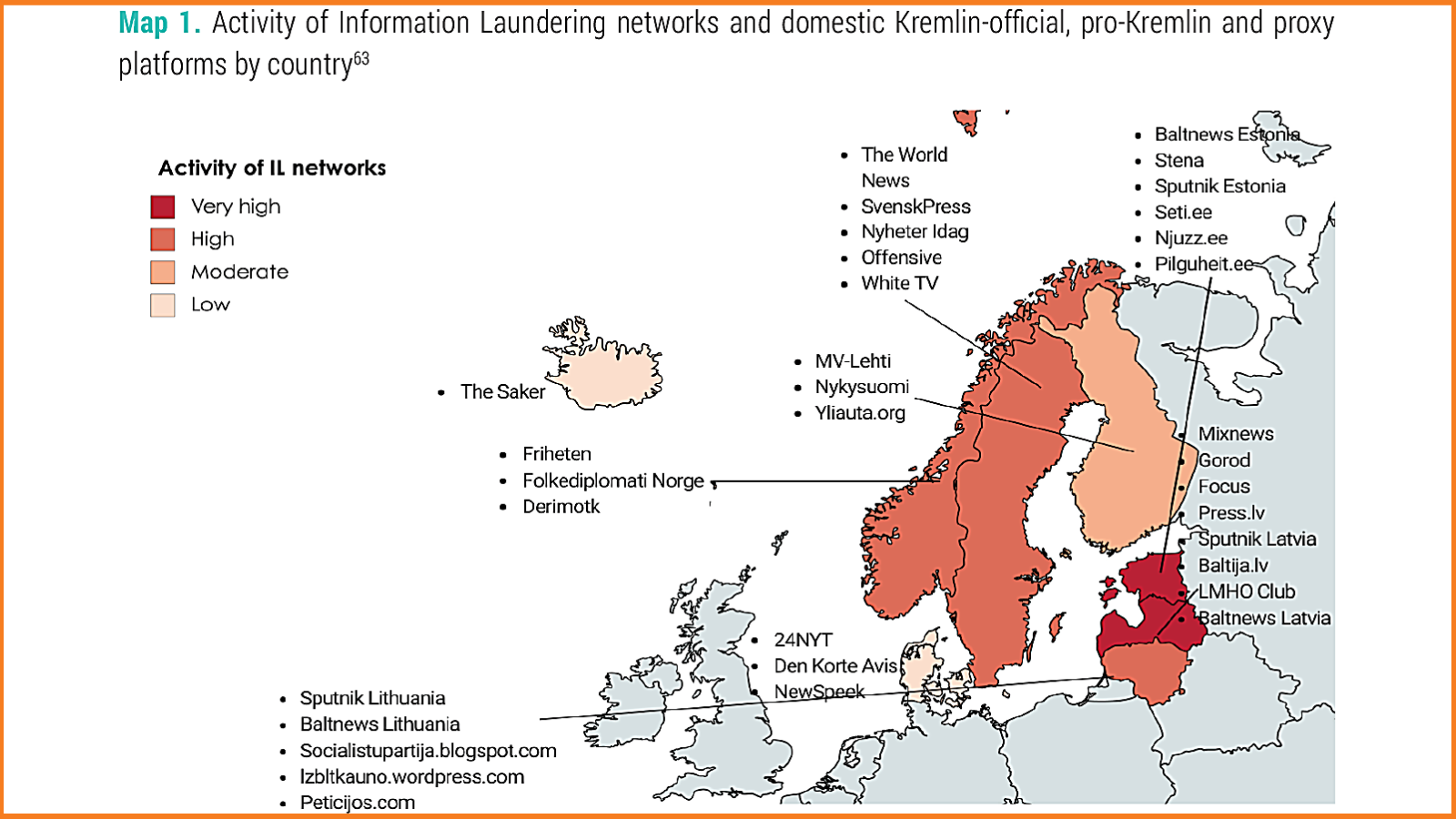 It begins with an explanation of how narratives can be understood in the context of strategic communication, followed by a case study focusing on how the Kremlin plans and employs information influence activities. The report also contains an analysis of narratives pushed by pro-Kremlin media and ends with a chapter about what constitutes information laundering and how it impacts information environments in Nordic states.

Attacks on democracy at large

The chapter about the Kremlin’s information influence activities uses Latvia’s case, where the country’s education system is transferring to the Latvian language in Russian language public schools where studying is currently split 60-40 between Latvian and Russian languages respectively. Obviously, the reform is not welcomed by some and thus foreign states use information influence activities to interfere in already existing domestic discussions, seeking to polarise society using deception to obscure, mislead and disinform.

The support of the Russian Federation to the cause of the pro-Russian school activists in Latvia and the populistic simplification of the problem bears a long-term risk of (a) polarizing the society and (b) weakening trust in the government, law enforcement, public administration, and democracy at large.

It’s worth noting that in addition to the pro-Kremlin media targeting audiences in Latvia, the Kremlin is also active in international organisations:

The international attempts by the Kremlin and its proxies to frame Latvia as a neo-Nazi country implementing policies to eradicate the identity of an ethnic minority achieves two goals: (a) placing Latvia as an outsider to common European and liberal democratic values, unacceptable to the Western democratic family of countries, and (b) justifying Russia’s foreign interventions (including military ones) to its home audiences by continuously maintaining a feeling of Russia’s compatriots abroad being threatened.

The report gives an overview of what the narratives about Nordic-Baltic countries are that the Kremlin is trying to promote internationally and how have they changed. The analysis covers mainstream pro-Kremlin media – Sputnik, RT and Pervyi Kanal – and compares findings in the year 2016 with 2018.

Narratives that were present in both years are as follows:

However, several new narratives have emerged and old ones have broadened. For example, the claim that “Russia does not agree that the Soviet Union occupied the Baltics” evolved from 2016 to “Baltic people disrespect the Great Patriotic War and the Soviet legacy”.

Also not present in the 2016 study was the Soviet era term shpionomaniya or ‘spy mania’, implying groundless fears of Soviet espionage in the West. This ridiculing expression was revived in 2018 in connection to the poisoning of the Russian ex-agent Sergei Skripal and his daughter in Salisbury 2018 and the expelling of Russian diplomats by numerous countries.

Russophobia and anti-Russian sentiment, closely linked with the ’spy mania’, was presented as an elaboration of the old narrative that the West conspires to make Russia a scapegoat for everything. Also new in 2018 were claims about NATO being a threat to security in Europe and claims that some of the NB8 countries have developed to absurd extremes by fostering a very liberal understanding of human rights.

The report concludes with a deep dive into information laundering operations. Similar to money laundering, false or deceitful information is legitimised through a network of intermediaries that gradually apply a set of techniques in order to distort it and obscure the original source.

The analysis of 570 single actors across 52 representative laundering cases confirmed that laundering is conducted in every NB8 country, with domestic actors enabling the spread of Kremlin influence within the country and across the region 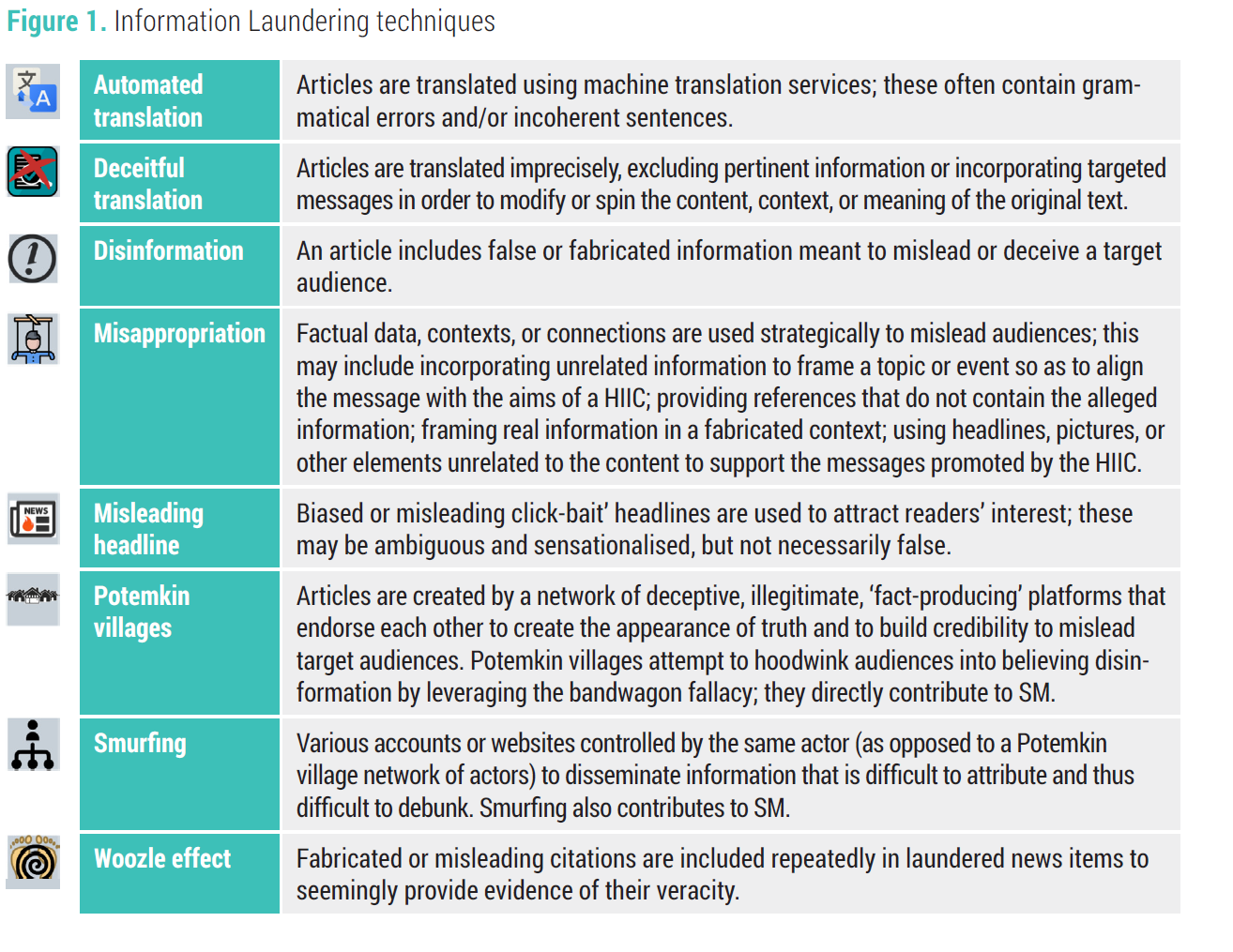 The report concludes with a deep dive into information laundering operations. Similar to money laundering, false or deceitful information is legitimised through a network of intermediaries that gradually apply a set of techniques in order to distort it and obscure the original source.

The analysis of 570 single actors across 52 representative laundering cases confirmed that laundering is conducted in every NB8 country, with domestic actors enabling the spread of Kremlin influence within the country and across the region.

While the focus of information laundering is on NATO’s activity in general, it is also used to criticise Ukrainian politics and the European Union’s sanctions against Russia, together with claims of Russophobia. The study reveals how information laundering actors disseminate ideologically charged narratives, commonly overlapping with extremist ideologies.

You can learn more about the study Russia’s Footprint in the Nordic-Baltic Information Environment and contributors here.