From Sweden with love 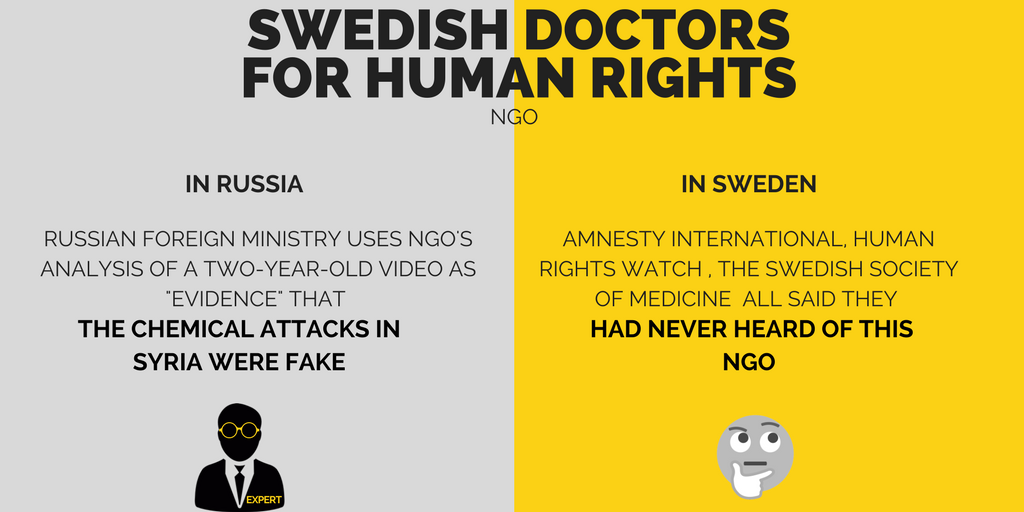 As we have previously explained, Russian state-owned media regularly make use of international “experts” to give legitimacy to pro-Kremlin narratives, even if the experts are known as such only by pro-Kremlin media. During the last couple of weeks, we have seen this strategy in action again. A little-known organisation from Sweden, “Swedish doctors for human rights” (Swedhr), has recently had a surprisingly big role in geopolitics. It was virtually unknown in Sweden or abroad until the head of the organization was cited by the Syrian delegation to the UN and by the spokesperson of the Russian Foreign Ministry, Mariya Zakharova. Russian and Syrian representatives used the organisation’s analysis of a two-year-old video as “evidence” that the chemical attacks in Syria were fake or false flag operations carried out by the NGO White Helmets.

As Codastory write in their in-depth article about the issue, Amnesty International in Sweden, Human Rights Watch in Sweden, the Swedish Society of Medicine and the Swedish Medical Association all say they had never heard of Swedhr, which describes itself as an “alternative NGO.” Yet the head of the organisation is regularly cited in Russian state outlets such as RT (Russia Today). As Codastory points out, nearly all of the outlets and representatives that quote the video in question as evidence for casting doubt on the recent chemical attack in Syria omit the fact that the video analysed by Swedhr is two years old. During several interviews in Russian state media (RT among others), the head of Swedhr, who is a retired doctor of psychiatry and public health, gives supposedly expert opinions on who is behind the chemical attacks in Syria, in line with the pro-Kremlin narrative on Syria (we describe it here and here).

The role of Swedhr, which was founded in 2015, has also been covered in Swedish media. The Swedish newspaper Dagens Nyheter has concluded on the basis of its website “The Indicter”  that Swedhr pursues a clear agenda which includes such narratives as that Ukraine is governed by fascists and that Swedish mainstream media (among them Dagens Nyheter) are Russophobes. These are common pro-Kremlin narratives.