From Syria with love 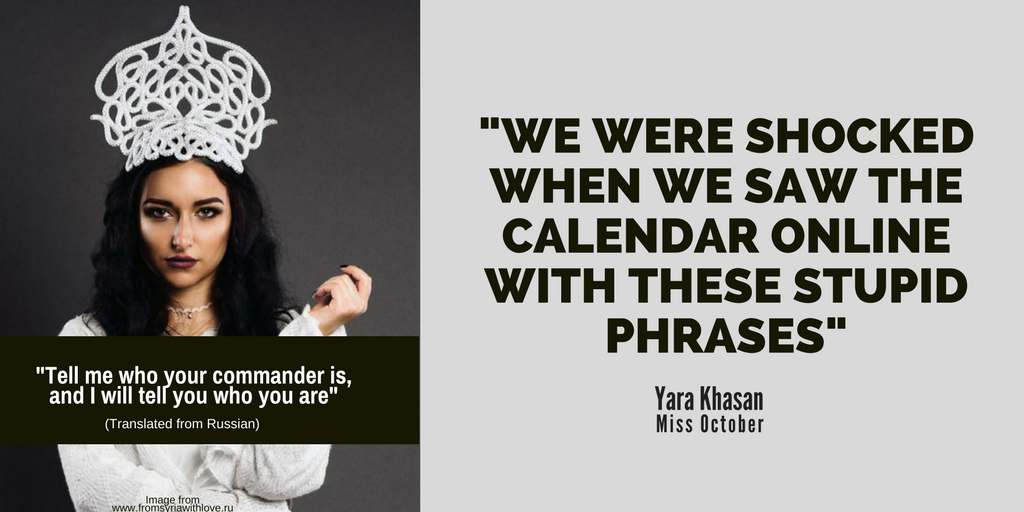 Using calendars with good-looking girls for political reasons is not new in Russia. Six years ago, President Putin received a calendar as a birthday present, which featured semi-nude female students of journalism from the Moscow State University. The ladies were presented alongside sophisticated quotes such as: “I need you”, “I love you”, “You are the best” or “Call me”.

This year, the calendar “From Syria With Love” was presented, with the subtitle “From Syrian girls to the Russian officers”. Again, an attractive female model is presented for each month. And again, the Syrian girls are accompanied by flirty captions: “I am calm when I see my country under your control”, “I immediately understood your intentions were serious”, “I was afraid I would never see you again”.

The authors of the product explain its purpose: “Western media often quote social media accounts of Syrian girls writing in perfect English how they suffer from the Russian actions. And these “girls” can’t even respond in Arabic when people offer to help. It is becoming clear to more and more people that these messages are not written by eight-year-old girls, but by the CIA. But for the organizers and the participants of our project it is important that those who fight terrorists know what real daughters of Syria think.”

The New York Times has in the meantime established that Bana al-Abed, the seven year old girl that tweets from Aleppo to her 360k followers with the help of her mother, really exists.

The calendar is a work of the group “Citizen”, which was chosen by the Russian Union of Youth, a major grant operator in Russia. Russian Union of Youth is run by Pavel Krasnorutsky, “one of Vladimir Putin’s so-called proxies, meaning he was authorized to speak on Putin’s behalf during the 2012 presidential campaign,” the website GlobalVoices.org explains here.

GlobalVoices author Kevin Rothrock adds an interesting observation: “At least some of the women featured in the calendar were mortified to learn about the suggestive phrases attributed to them, reports the Russian TJournal. Yara Khasan, or Miss October, told TJournal: ““We thought it would just be our photographs. But we were shocked when we saw the calendar online with these stupid phrases. […] I explained to my circle of friends on Facebook what happened, because the reaction in Syria has been awful. Everyone is furious about these phrases.”