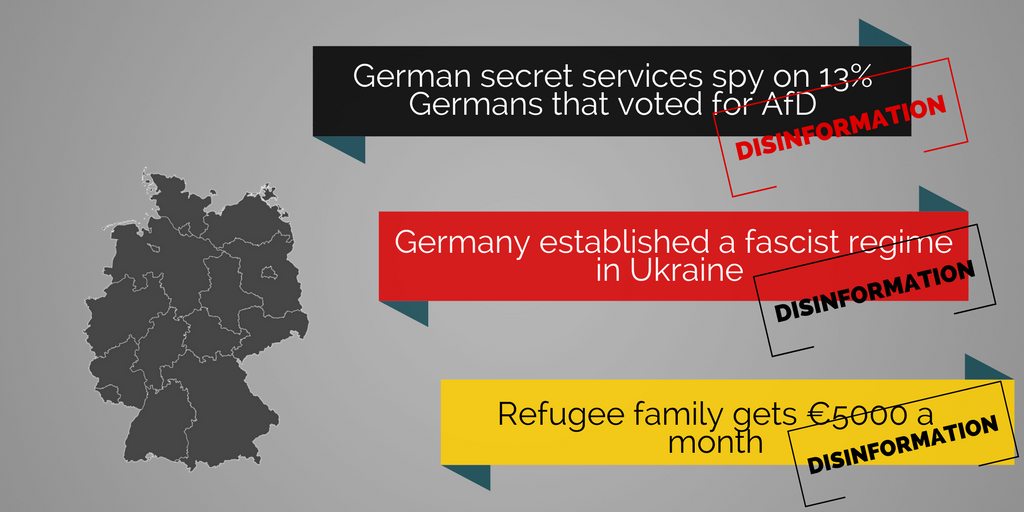 Less than two weeks ago, elections were held in Germany. And although the election campaigning is over, the disinformation campaign is still ongoing. We have written about the narratives used about Germany and especially Angela Merkel several times before and during the last week we could notice some echoing of those familiar stories, as well as a couple of new disinformation inventions. For example, Germany was again accused of establishing a fascist regime in Ukraine and again we saw disinformation about the amounts paid to refugees in the country.

Among the newcomers in the disinformation spectra, we noticed false claims that the German secret service will carry out surveillance of the 13% of the German population that voted for the AfD, that Angela Merkel won’t be able to cooperate with the Greens and FDP since they are Eurosceptic, and that representatives of Russia have never spoken to representatives of the AfD (clearly not true).

And although we still can’t say anything about the impact, as shown by the DFRLab, some of the messaging in the countdown to the German elections was amplified by Russian-language bots; and on Russian social media platform VKontakte, 90 percent of the most popular posts concerning the German election supported the AfD.

What are some of the worst things you can think of? The most evil atrocity perpetrated by mankind, the unthinkable? Is it the actions of the self-proclaimed Islamic State? Or the actions by Nazi Germany during WWII? Maybe it is genocide, or paedophilia? Those are all atrocities that any sane person would object to. This week we saw pro-Kremlin disinformation accusing the US and Ukraine of all of them.

The method of accusing your enemy of the worst imaginable without providing any proof is nothing new in the disinformation universe. It is indeed a well-known tactic, and one that has considerable impact but will cost almost nothing. The logic goes that all you have to do is sow some doubt, plant an idea – and once it is out there, it will be popping up in people’s minds. “No smoke without fire.” But this kind of disinformation is just that – all smoke, no fire.

So, when a Russian state controlled TV show brings up the infamous “pizza gate” case – a conspiracy theory that was debunked and proven false about a year ago – and suggest that the theory should in fact be taken seriously in the light of new “revelations” of US politicians in a paedophilia network (again, no evidence of any network), they are creating smoke. Or when Russian state owned TV accuses Ukraine of planning a genocide of the Russian population of the country and establishing a Nazi regime – again, there is no evidence, only a lot of smoke. 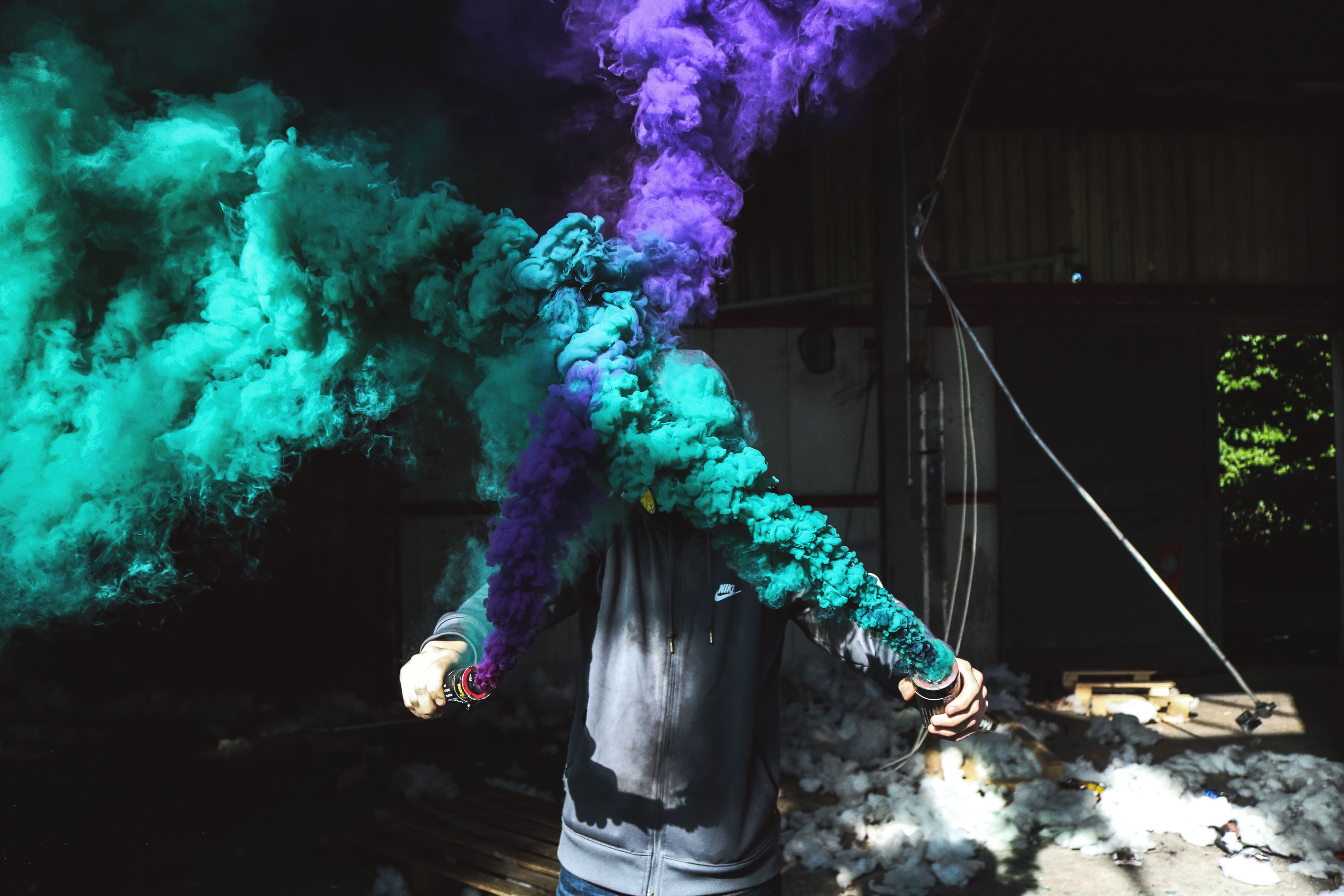 A lot of smoke, but no fire

Or, when TV Zvezda claims that the Syrian military has found a Ukrainian ISIS camp in Syria and another Russian state TV show claims that Ukraine provided resorts in Crimea to Daesh battalions before Russia annexed the peninsula, again – there is no evidence.

The US was also accused of creating Daesh, leading Daesh, supporting terrorism in Syria and doing everything to stop the elimination of Daesh. No mention of the Global Coalition against Daesh; instead Russia was presented as the only country that fights terrorism.

All smoke. The problem is that we can be sure that the smoke will cloud the minds of some.

Date
Title
Outlets
Country
Explosions in Vinnitsa were organized by Ukrainian soldiers
Ukraine
EU officials supported the violence in Catalonia
Spain
The US is doing everything to prevent the elimination of Daesh
Middle East, US
The US is planning to overthrow Erdogan
Turkey, US
The requirement to register RT as a foreign agent contradict the American principles of freedom of speech
US
Ukraine had a plan to "clean up" the population of Crimea, Kharkiv, Donbas and Odessa
Ukraine
Kyiv has developed a plan for a genocide of the population of Donbas
Ukraine
The US has unofficially declared a war on Russia
US, Russia
Syrian military stormed a camp of Ukrainian ISIS fighters
Syria, Ukraine
Part of Ukraine is a Russian territory with a population that has nothing in common with Ukraine
Ukraine, Russia
Nazism is now being implemented in Ukraine
Germany, Ukraine
NATO military instructors who raped local girls were wounded by Ukrainian military forces
Lithuania, Ukraine
Sweden and Finland are deporting mainly Russian grandparents - it looks like a conspiracy
Sweden, Finland, Russia
Documents show that Daesh was created by former US President Barack Obama and presidential candidate Hillary Clinton
US
Washington supports terrorists in Syria and therefore is an enemy of Moscow
Syria, US, Russia
NATO activities in Georgia pose a serious threat of destabilization in the South Caucasus and to the security of the Russian Federation
Georgia, Russia
The new Ukrainian law on education is equivalent to a genocide of Russians
Ukraine, Russia
German secret services will surveil the 13 percent of the German population since they voted for the AfD
Germany
The German parties FDP and the Greens have strongly euro-sceptic policies, Merkel won't cooperate with them
Germany
Migrants granted refugee status will be free to move within Schengen
The monthly support to a 4 member refugee family in Germany is 5000 euro a month
Germany
Germany supported the American project of establishing a fascist regime in Ukraine
Syria, Germany, US, Russia
Russia never met with the AfD
Germany, Russia
In 2014, Maidan in Kyiv started after American diplomats with military ranks conducted some meetings in Ukraine
US, Ukraine, Russia
The law on education demonstrates that Ukraine is a Nazi state
Ukraine
Daesh has seized the territory of Syria under the leadership of the US
Syria, US, Russia
Finland, Estonia and Hungary are pushing Russia's Finno-Ugric peoples to separate from Russia
Hungary, Finland, Estonia, Russia
Russia is the only country that fights terrorism
Russia
Ukraine has provided weapons and the use of resorts in Crimea to Daesh battalions
Ukraine
Paedophilia common among US politicians, the "Pizza gate" theory should be taken seriously
US, Russia
By continuing to browse the site you are agreeing to our use of cookies.